I am writing to you as Chairman of the Board of Sika AG. On behalf of the majority of the Board, constituted by the six non-conflicted Sika Board members, I am taking the unusual step of addressing you directly in order to show you how Saint-Gobain’s takeover attempt, launched a year ago, would destroy value at Sika and therefore would also destroy value for you as a shareholder of Saint-Gobain.

On December 8, 2014, Saint-Gobain announced the intended acquisition from the Burkard family of a 16% capital interest in Sika AG, carrying 52% of the company’s voting rights. On the same date, the non-conflicted Board members and the Group Management of Sika announced that they will not support the change of control to Saint-Gobain as the transaction lacks industrial logic and destroys Sika’s growth model.

12 months after the announcement of the intended transaction there is still no end of the conflict in sight. Due to legal proceedings initiated by the Burkard family against the company and some of its Board members, which final outcome may only be known in a few years, Saint-Gobain no longer predicts when the change of control would occur.

Sika's Board and Group Management have thoroughly studied the proposed transaction and have in this process engaged well-respected international experts, who have had full access to all company data. We, together with our advisors, have come to the conclusion that the intended transaction would destroy Sika's unparalleled growth model that has delivered significant value to shareholders over many years. All stakeholders in Sika (except for the selling party) fully support our position.

Saint-Gobain has neither been in contact with the Board of Directors or the management of the company, nor did Saint-Gobain perform a due diligence prior to signing the purchase agreement with the Burkard family. Furthermore, Saint-Gobain is a direct competitor of Sika in the mortar business, leading to a direct conflict of interest to the detriment of Sika. Our analysis does not confirm the synergy potential of EUR 180 million as claimed by Saint-Gobain. These synergies are not realistic. Board and management of Sika, together with their independent expert advisors, have come to the conclusion that the synergy potential is minimal. In fact, our calculation shows that the return on capital invested (ROCE) would be substantially below the cost of capital of Saint-Gobain. The transaction is therefore value destructive for you as shareholders. The purchase price of CHF 2.75 billion (representing a premium of more than 100% relative to today’s share price) is not economically viable.

By paying such a huge premium and with no relevant synergies, cash return on the 16% economic ownership of Sika would be limited to the dividend, which was CHF 29 million in 2014 - corresponding to a return of 1%. It therefore appears that the perceived benefit is driven only by accounting considerations to consolidate the financial statements of the Sika Group, improving Saint-Gobain’s standalone growth and margin profile. By pursuing this path, Saint-Gobain management assumes that its shareholders will not see the fact that the actual cash return to be expected on the significant upfront investment for a 16% stake is highly unattractive.

Saint-Gobain claims that Sika's growth model would continue unimpaired. We have no assurances or information from Saint-Gobain that would support this at all. Notwithstanding the broad supervisory power of the Special Expert Committee (as elected by the Sika shareholders in April 2015) the way Sika conducts its business would be massively disrupted and possibly impaired.

It can be assumed that if the intended transaction would be consummated it would not only lead to a substantial increase in administrative complexity but also directly attack and undermine Sika's efficient line management and clear allocation of P&L responsibility. As a consequence the superior growth model of Sika would come to an end and the company’s key performance indicators (KPIs) would diminish to the much lower levels of Saint-Gobain.

For your information I enclose a letter signed by more than 140 Sika Senior Managers addressed to Mr. de Chalendar in which they raise their profound concerns related to the intended transaction. They, too, fundamentally question the viability of the synergies assumed by Saint-Gobain.

It is these Sika Senior Managers who, together with the Group Management, have been responsible for driving Sika's unmatched success during the past years. The record performance, which stands out in any comparison to peers, is the result of the entrepreneurial spirit of these people and their direct P&L responsibility. Sika's business is a people's business. The intended transaction is prone to destroy the great Sika spirit and with it, the sustainable value creation of Sika. By definition, the lack of support from Sika’s Senior Managers will dramatically undermine the value proposition to Saint-Gobain’s shareholders.

The Board members of Sika have a legal duty to act in the best interest of the company. As the intended transaction lacks industrial logic and will destroy value for all shareholders, the non-conflicted Board members have invoked Article 4 of Sika's Articles of Association, which authorizes the Board to disapprove an acquirer of more than 5% of Sika's registered shares. The Superior Court of Zug, in its decision of June 10, 2015, expressly authorized the Board to maintain the status quo until this issue is finally adjudicated.

With the support of the entire management team, employee representatives and virtually all of the public shareholders, the non-conflicted Board members will continue to act in the best interest of Sika and, therefore, oppose the intended transaction. 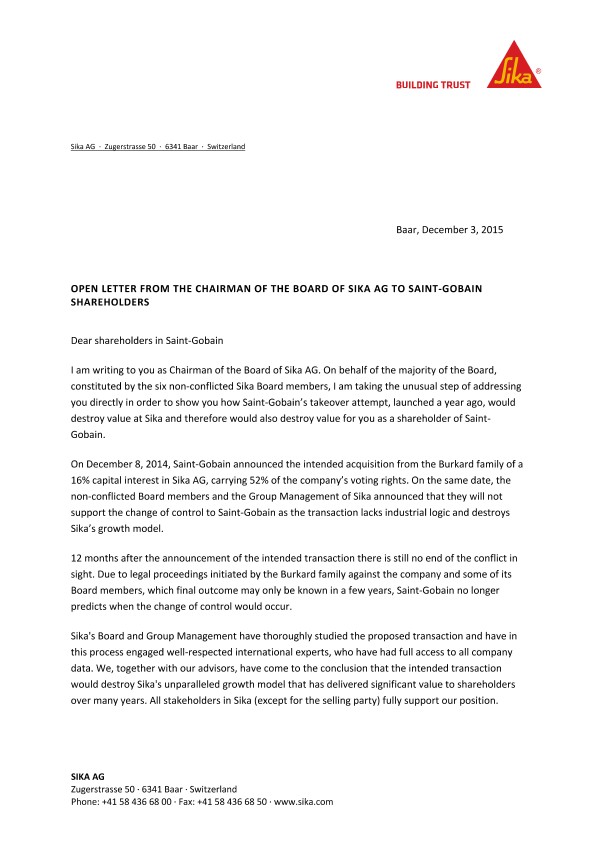 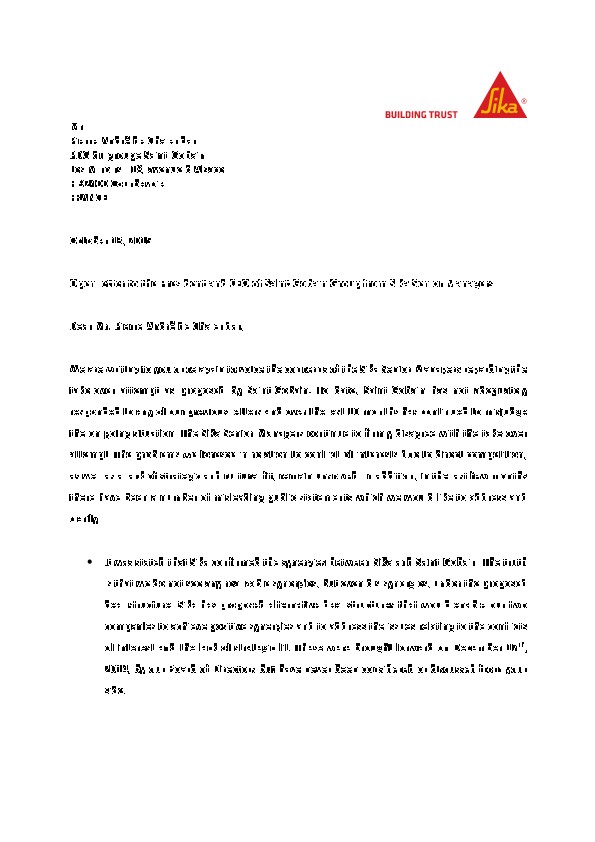