Sika achieved highly dynamic growth in the first quarter of 2015, thereby making a strong start to the year despite the very high sales growth in the reference period (2014: 23.3%). At constant exchange rates, sales rose by 5.1% to CHF 1.195 billion. Gains in all regions contributed to this impressive performance, with North and Latin America even posting double-digit growth. In terms of Swiss francs, first-quarter sales fell slightly by 0.9%. Negative currency effects stemming from the strength of the Swiss franc amounted to 6.0%.

Sika CEO Jan Jenisch: "This successful quarter demonstrates once more that our growth model is working. In the first three months of the year we have opened three new factories and our 91st national subsidiary has been founded in Myanmar. By investing in new factories and products, acquisitions and accelerated expansion in growth markets, we will continue our successful course in 2015."

Sales in the region EMEA (Europe, Middle East, Africa) grew by 1.1% on the back of double-digit growth rates in Eastern Europe, Africa and the Middle East. By contrast, demand from the Western European markets was at a lower level than in the very strong prior-year period. The opening of new factories in Dubai and La Réunion will generate additional growth impetus in the region in the future.

The strongest growth was seen in the regions Latin America and North America, at 17.0% and 10.7% respectively. The key drivers of these gains were the persistently strong US construction sector and Sika's strong market presence in Latin America.

Growth in the region Asia/Pacific slowed to 2.5%. Significant sales gains were achieved in Southeast Asia and the Pacific. However, there was an appreciable decline in demand from the Chinese and Japanese markets. Sika opened its first factory in Sri Lanka.

Sika's strategy of accelerated growth in the emerging markets continues to generate very good results, with sales growing by 10.3% in the first quarter. The mortar business, in which margins are healthy and which is a core component of Strategy 2018, put in a particularly pleasing performance: growth was an above-average 7.5%. Sika has further expanded this growth business by making three acquisitions in recent months – BMI in the USA, CTA in Australia and Duro-Moza in Mozambique.

The accelerated build-up of the growth markets will continue. It is planned to open between seven and nine factories in 2015. Sika expects sales growth of 6% to 8% at constant exchange rates, in line with Strategy 2018. The strong Swiss franc remains a considerable challenge for the margins. However, with raw materials prices falling and in view of the success of Sika's growth model, the company aims to achieve a slight improvement in margins compared with the previous year. Nevertheless, the unknown outcome of Saint-Gobain's hostile takeover bid remains a major element of uncertainty in this forecast.

Net Sales in the first three months of 2015 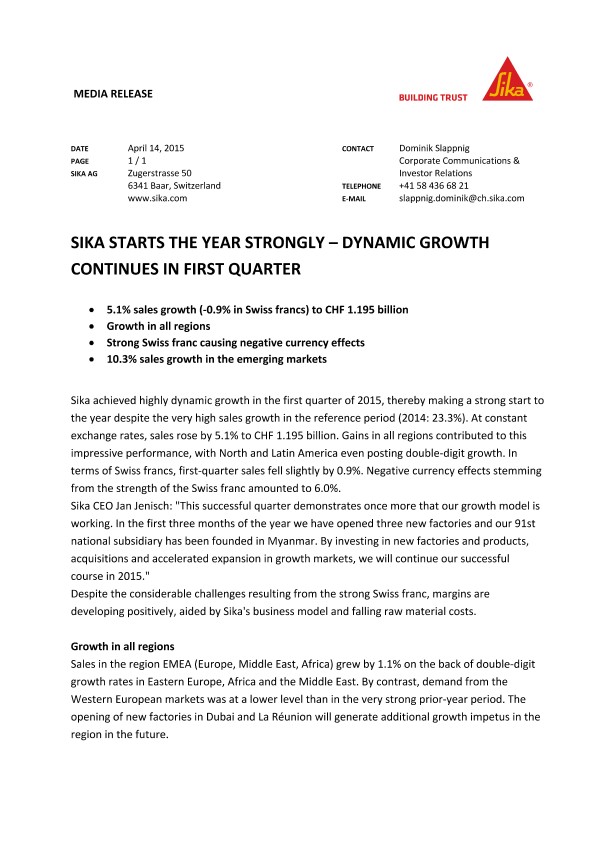 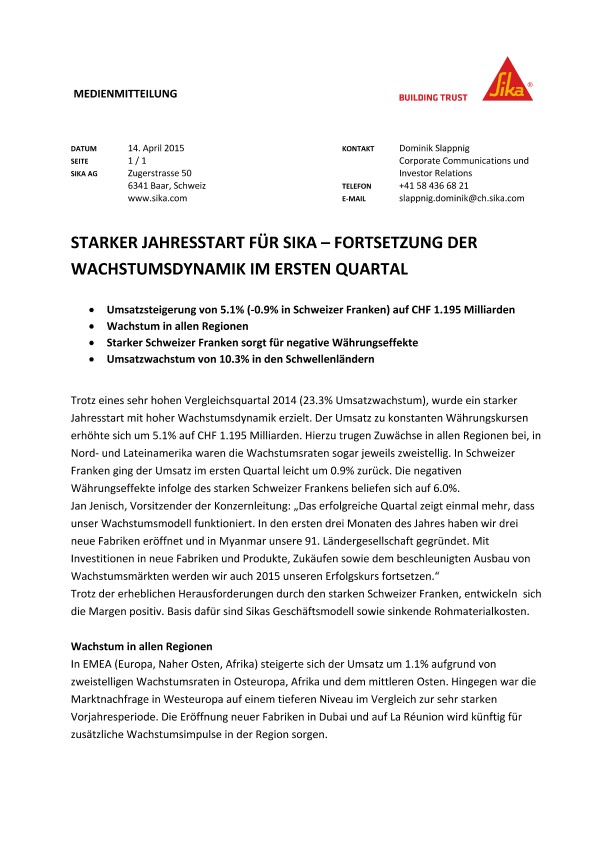