Strong Start to the Year with 8.3% Sales Growth in the First Quarter of 2016

▪ 8.3% sales growth in local currencies to CHF 1,274.4 million
▪ Growth in all regions
▪ Four new factories and one national subsidiary opened
▪ Confirmation of targets 2016

The dynamic growth trajectory continues in 2016 with a sales increase of 8.3% (previous year: 5.1%) and the setting of a new sales record of CHF 1,274.4 million for the first quarter. The more stable exchange-rate situation resulted in a modest currency impact (-1.7%) and very good sales growth in Swiss francs of 6.6%. Margins continued to develop positively in the first quarter.

Jan Jenisch, CEO: "We are very pleased with how the business performed in the first quarter. Our investments in new products, national subsidiaries and factories paid off, while a sales increase of more than 8% represents an impressive continuation of our growth strategy. All regions contributed to the good start to the year, with double-digit sales growth in Argentina, Colombia, North America, Southeast Asia, Pacific, Africa, the Middle East and our industrial business. We will be continuing our growth strategy as planned, with the opening of 6 to 8 new factories and 3 to 4 new national subsidiaries in the 2016 business year."

Sales in EMEA (Europe, Middle East, Africa) increased by 8.7% (previous year: 1.1%).  Good growth rates were achieved in Southern Europe and the Middle East. The strongest sales growth was achieved in Africa, where there was an increase of more than 20%. Sika's presence in Africa consists of 16 national subsidiaries and 14 production locations. Demand in the Western European market is at a sound level. A new mortar factory was opened in Kryoneri, near Athens, while a new national subsidiary was opened in Kuwait – Sika's 13th in the Middle East.

At 12.6%, it was the North America region that posted the strongest growth (previous year: 10.7%). Growth drivers include the more rapid expansion of supply chain and the investments in sales force in the growing metropolitan areas, together with robust construction activity. The number of production sites for mortar and concrete admixtures in North America was increased to a total of 20 in the past two years with four new factories in Denver, Atlanta, Philadelphia and Vancouver plus the acquisitions of BMI and Scofield.

With a sales increase of 4.0% in the first quarter of this year, growth in the Latin America region slowed from the 17.0% figure for the equivalent period of the previous year. In particular, the economic crisis in Brazil and a significant devaluation of some local currencies led to a downturn in business activity.

Growth in the Asia/Pacific region was increased to 4.3% (previous year: 2.5%). Significant, double-digit sales gains were once again achieved in Southeast Asia and in the Pacific. Market demand in China remained at a low but significantly more optimistic level than a year earlier. The first factory in Myanmar was opened in February 2016. Sika is positioning itself with a view to benefit from the construction boom in this burgeoning market through a new production site for concrete admixtures in the Yangon metropolitan region. The market expansion in Asia is completed by a new plant in Phnom Peng, Cambodia, which is also Sika's first manufacturing plant in that country.

The Strategy 2018 was successfully implemented in the first quarter, enabling our annual targets for 2016 to be confirmed. Sales growth of 6-8% is expected for the current business year, along with an above-average rise in margins. The growth strategy will continue in 2016 with the opening of 6 to 8 new factories and 3 to 4 national subsidiaries.

Net Sales in the first three months of 2016 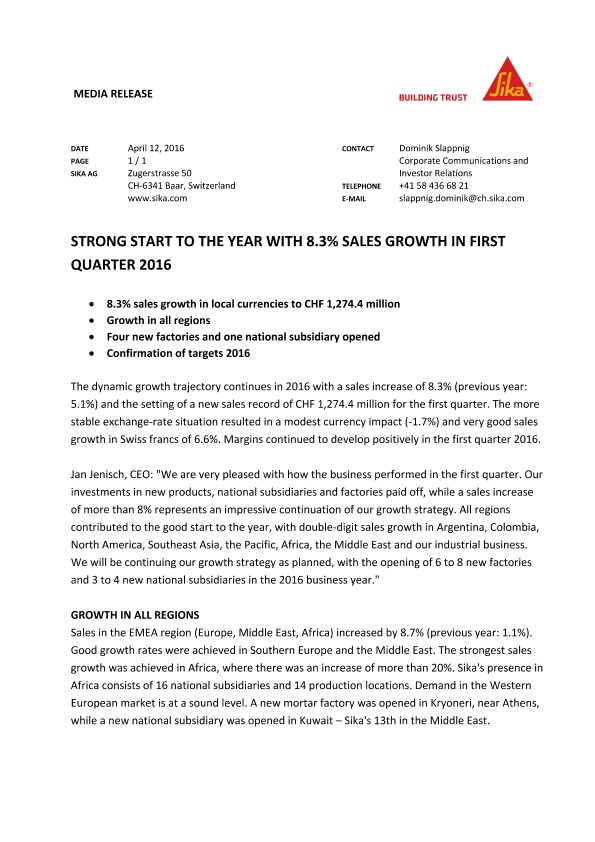 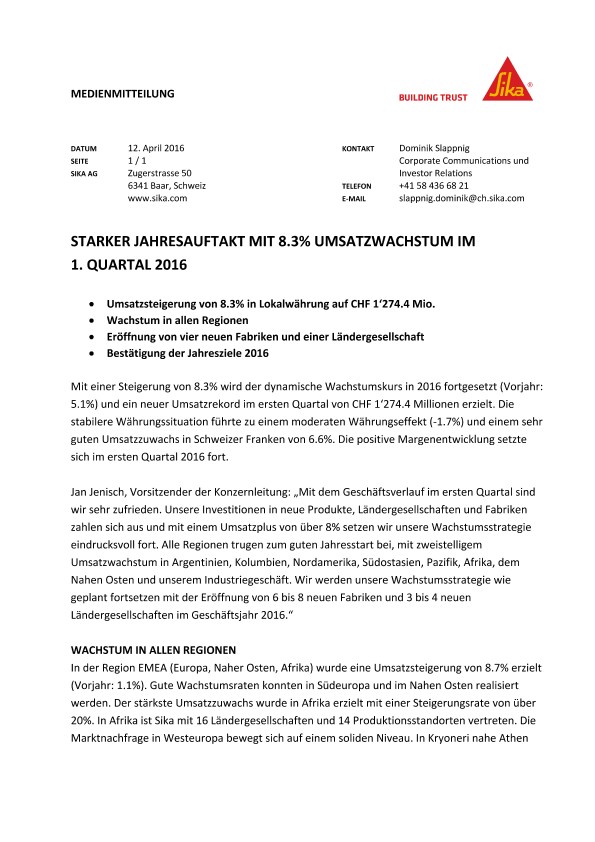