GROUP NOTIFICATION AND LETTER OF SUPPORT

Sika AG has received a disclosure notification from Cascade Investment L.L.C., Bill & Melinda Gates Foundation Trust, Fidelity Worldwide Investment and Threadneedle Investments that they form a group (the "Group"). In its notification the Group announces that it holds a total of 207,395 bearer shares in Sika (reflecting 8.61% of the share capital and 4.62% of the voting rights). Further, Sika has received a letter of support from the Group.

GRAVE CONCERNS ABOUT THE FUTURE WELFARE OF SIKA

In its letter the Group expresses its grave concerns about the future welfare of Sika's business and its more than 16,000 employees in view of the proposed sale of the Burkard family's interest in Sika to Saint-Gobain. In the Group’s view this transaction would result in significant and enduring harm to the interests of the majority of the company's shareholders. The Group assures Sika its full and active support in exploring and pursuing action to resolve this situation as quickly as possible and protect the long-term prospects and welfare of the business and its shareholders. 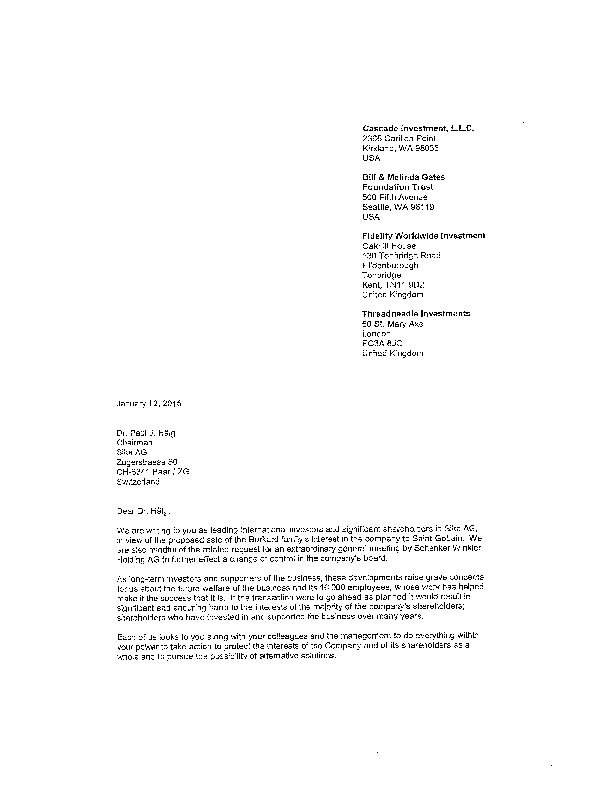