Following an in-depth analysis, the board of directors of Sika has decided on April 14, 2015 to restrict the voting rights of Schenker-Winkler-Holding AG (SWH) at the annual general meeting to 5% of all registered shares, to the extent that such a restriction is necessary to prevent an early change of control to Saint-Gobain.

For all other agenda items SWH’s voting rights were not restricted.

At the annual general meeting the shareholders approved most of the proposals of the board and predominantly followed its recommendations. The following resolutions were taken:

The annual report, the annual financial statements and the consolidated financial statements for 2014 were approved. The shareholders supported the board’s proposal for a gross dividend of CHF 72.00 per bearer share and CHF 12.00 per registered share, representing a 26.3% increase compared to the previous year's distribution.

The proposal by the shareholder group led by Ethos Foundation for the removal of the opting-out clause was rejected.

The request of the shareholder group consisting of Cascade Investment L.L.C., Bill & Melinda Gates Foundation Trust, Fidelity Worldwide Investment and Threadneedle Investments for a special audit was accepted by the general meeting. The special audit will examine whether the company, in particular the representatives of SWH on Sika’s board, have provided the Burkard family or Saint-Gobain with non-public information over the last 24 months By approving this proposal the shareholders have rejected a counter-proposal of SWH.

The second request of the shareholder group Cascade/Bill & Melinda Gates Foundation Trust/Fidelity/Threadneedle for the appointment of a special expert committee, consisting of Peter Montagnon, Peter Spinnler and Jörg Walther, was also approved by the shareholders. By this a control body is established that will supervise the future conduct of the board of directors following a possible change of control in order to prevent conflicts of interests and disadvantages for the public shareholders as a consequence thereof.

The term of office of the committee will run at least until the annual general meeting 2017. The body will, however, remain inactive as long as the majority of the board of directors consists of individuals who are independent from the family shareholder and Saint-Gobain. The committee will regularly report on its activities. With the approval of the proposal of the group Cascade/Bill & Melinda Gates Foundation Trust/Fidelity/Threadneedle the shareholders have automatically rejected a counter-proposal of SWH. For this agenda item and for the resolution on the special audit a majority of the capital and not of the voting rights was required. 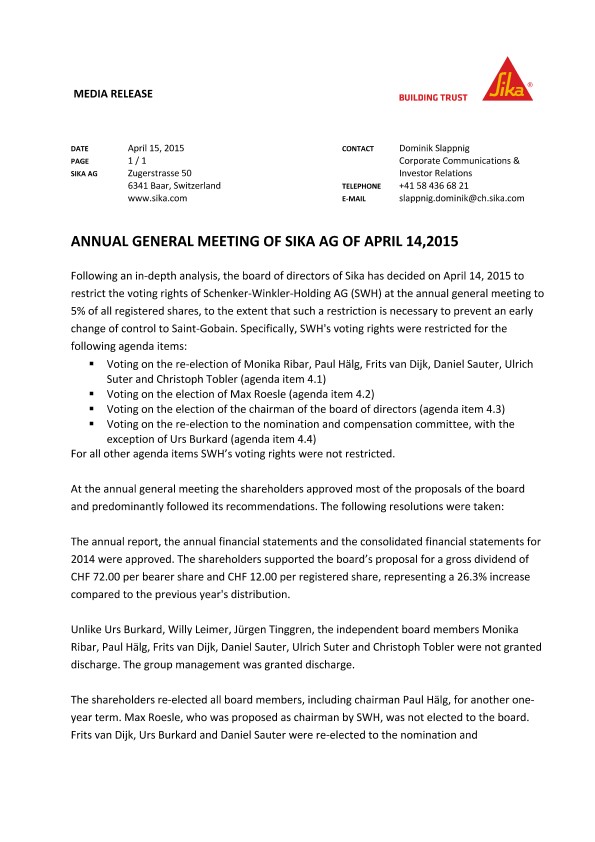 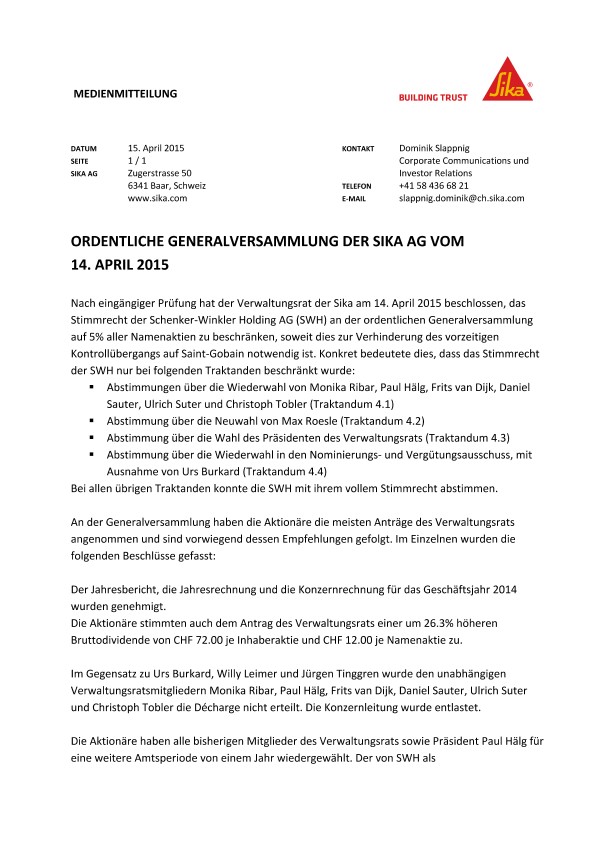