Board Letter to the Sika Shareholders

It is now 12 months since all of us were surprised by the intended sale of the family Burkard's stake in Sika.

On behalf of all non-conflicted Board members I would like to offer you my gratitude for your tremendous support during the last year. With statements at the shareholders' meetings and numerous letters you have expressed your concerns on the detrimental impact the transaction would have on Sika. You have endorsed the actions the non-conflicted Board members have taken to safeguard the interests and success story of Sika.

The Board and Group Management have rejected the change of control in the proposed form since the announcement. The reasons are still the same:

The transaction – which is unparalleled in the world – will thus destroy the very basis on which Sika's growth model is built. It is, therefore, not in the interest of Sika.

While the Board has repeatedly explained the detrimental effects of this transaction, we still miss any conclusive explanation from the potential buyer to justify the claimed industrial logic. We especially note that despite the paramount importance of human resources for Sika's success, Saint-Gobain has still not entered into a constructive dialogue with Sika's Board and management on the obvious shortcomings of the transaction.

Allow me to emphasize the strong performance of our employees under the leadership of the Group Management. Unimpressed by the conflict, they deliver record results and execute the Strategy 2018 ahead of plan. We have reported significant increases in both volumes and market share in all regions in the first nine months of the year, resulting in a 5.5% growth in sales and a 9% rise in net profit. The growth strategy progressed with investments in eight new factories, three new companies and five acquisitions.

These achievements illustrate Sika's policy of “business as usual”. The continued success is made possible by highly motivated employees and the unique spirit that drives them. The success is also due to the commitment and loyalty of our 160 Sika Senior Managers of whom nobody left Sika despite the ongoing conflict.

The Board continues to be available for constructive talks with both the family Burkard and Saint-Gobain. We have repeatedly made alternative proposals to remedy the obvious shortcomings of the intended transaction. I have also written to Saint-Gobain's shareholders, which letter I attach for your information.

Again thank you for your ongoing support. 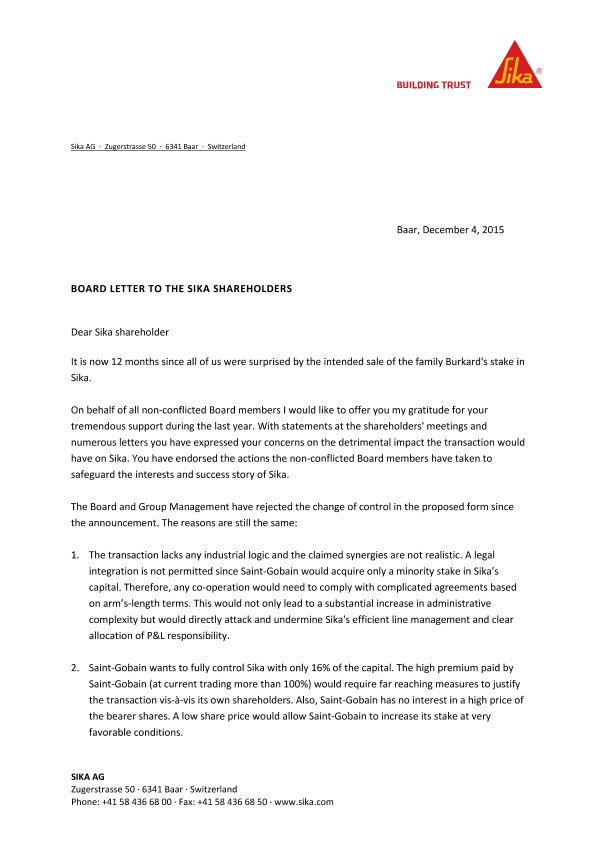