Growth in All Regions, with Above Average Rise in Net Profit

Significant increases in both volumes and market shares were achieved in all regions in the first nine months of the 2015 financial year, with double-digit sales growth in the core markets of Latin America, Africa, Middle East, Eastern Europe, Southeast Asia and the Pacific. At constant exchange rates, sales rose by 5.5% to CHF 4.095 billion, despite the sharp business decline in China.

With the negative growth in the Chinese market excluded, sales rose by 6.8%. The strength of the Swiss franc led to conversion effects of –7.4%, and thus to a slight –1.9% decline in sales in terms of Swiss francs. Margins could be further improved, in particular by volume growth, continuing efficiency improvements and lower commodity prices, leading to an above-average rise in profit. Net profit increased by 9.0% to CHF 338.2 million (previous year: CHF 310.2 million).

Jan Jenisch, CEO: “We have continued our growth in the third quarter, achieving a sales increase of more than 5%. Our growth strategy progressed with investments in eight new factories and three new national subsidiaries. Under challenging global market conditions, our 17,000 employees have demonstrated their competence and commitment and once again achieved a record result. Given the strength of the Swiss franc, earnings growth of 9% is a very convincing result.”

The region EMEA (Europe, Middle East, Africa) increased sales by 4.4% in the first nine months. Growth was accelerated by the positive business performance in Eastern Europe, Africa and the Middle East. Sales in Western Europe did not quite match the extremely strong prior-year result. The expansion of production capacities, with new factories in Dubai, Nigeria, Ivory Coast, Russia and La Réunion, will stimulate additional future growth in the region. New national subsidiaries were established in Tanzania and Ethiopia.

Latin America and North America recorded the strongest sales growth. Despite a difficult market environment in Brazil, gains in market share led to a 10.9% increase in sales in Latin America. Investment in new factories in Paraguay and Argentina and the launch of new products are paving the way for future growth.

In North America, the healthy US construction sector led to a 7.7% increase in sales. The expansion of production capacities is in line with the positive outlook and a significant growth driver for the future. Growth in the region Asia/Pacific slowed to 1.3% owing to the negative market trend in China. On the other hand, double-digit sales increases were achieved in Southeast Asia and the Pacific. A first factory was opened in Sri Lanka and a new national subsidiary was established in Myanmar.

Sika’s accelerated growth in the emerging markets continues to generate very good results, with sales growing by 8.1%. The high-margin mortar business – a core component of Sika’s Strategy 2018 – posted above-average performance, with sales growth of 11.6%. Sika has further expanded its fast-growing mortar business in recent months by making three acquisitions – BMI in the USA, CTA in Australia and Duro-Moza in Mozambique.

For the fourth consecutive year both the operating result and net profit have increased, reaching record highs in the current year. Volume growth, ongoing efficiency improvements and reduced commodity prices more than made up for the strength of the Swiss franc and led to above-average margin increases.

With investments in new factories and the establishment of new national subsidiaries, the progress of the growth model continues in 2015. Sika expects sales growth of 5% on the basis of constant exchange rates. Margins for the year as a whole are expected to rise at above-average rates thanks to continued volume growth, efficiency improvements and lower commodity prices. The unknown outcome of Saint-Gobain’s hostile takeover attempt remains an element of uncertainty for the future. 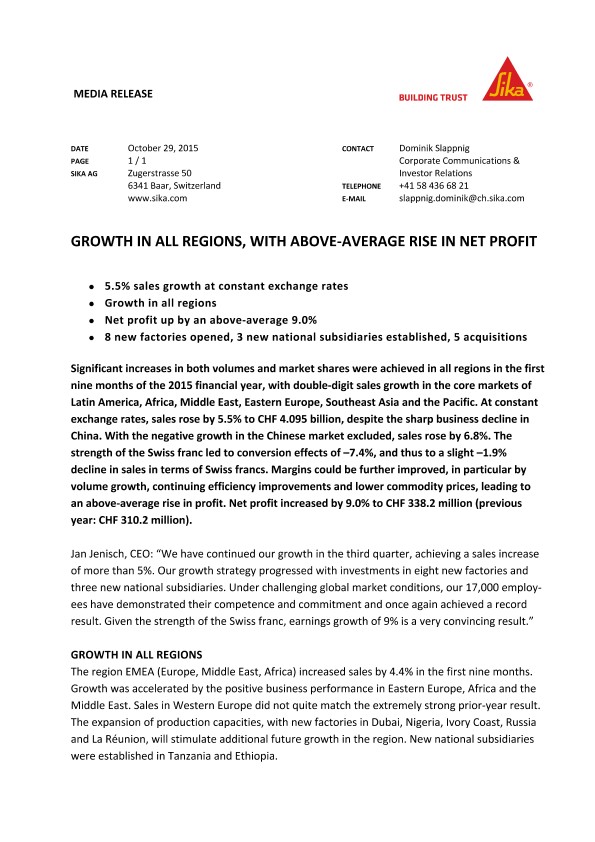 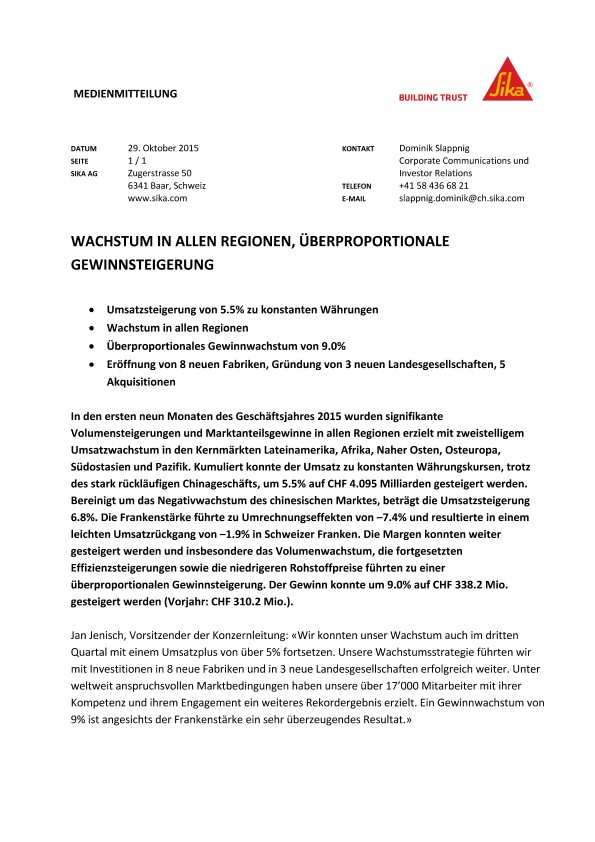 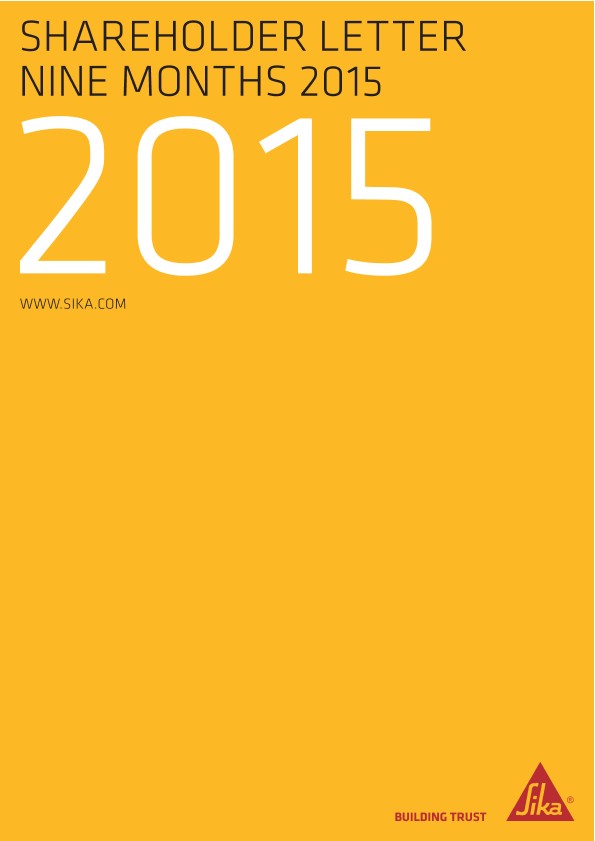 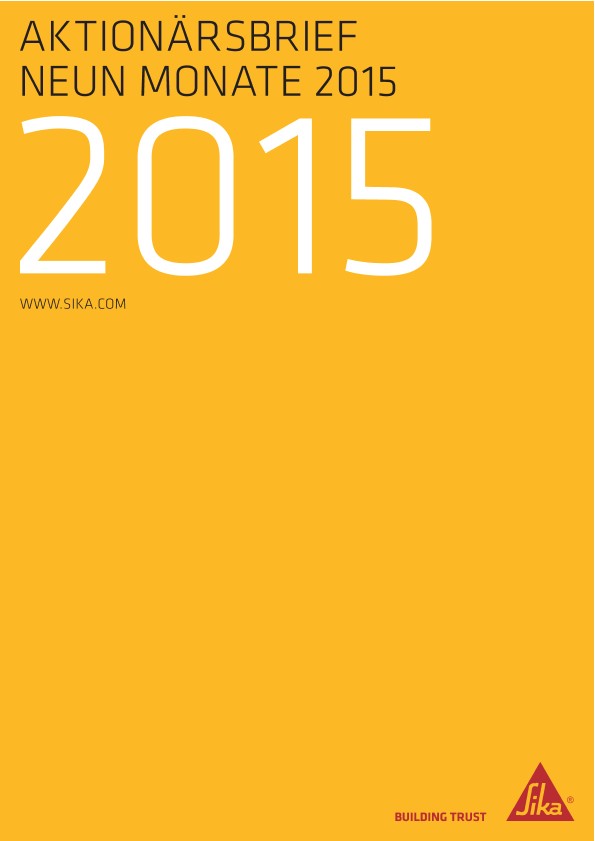