The Sika success story continues. The implementation of Strategy 2018 is well under way. Sales are at record levels in all regions. All relevant growth targets for full-year 2014 have been exceeded. An above-average increase in net profit is expected for the business year 2014.

In the fourth quarter of 2014, Sika's consolidated net sales rose by 5.1% despite a very strong prior-year period (+17.8%). There was a considerable decrease in negative currency effects. On a currency-adjusted basis, sales were up 4.6%.

Sales for full-year 2014 rose by 13.0% to CHF 5.57 billion. Sika thus significantly exceeded its growth targets. All regions contributed to this growth and set new sales records. The negative currency effect for the full year was -4.7%. Sales in Swiss francs increased by 8.3% after adjustment for currency effects.

Sika CEO Jan Jenisch: "We exceeded our growth targets not only in the last quarter of 2014 but also throughout the entire financial year. These record results were achieved thanks to our employees, who use their expertise and demonstrate huge commitment every day as they implement our growth model. Our Strategy 2018, under which we are accelerating the build-up in the emerging markets, investing in new factories and launching new products, is producing results that exceed our targets and expectations."

Record Sales In All Regions

Sales in the region EMEA (Europe, Middle East, Africa) increased by 13.3% in the year under review. Visible growth drivers in the Middle East and Africa and the moderate recovery seen in the southern European markets had a positive impact on the region’s development.

North America recorded a 7.9% increase in sales. Construction projects that had been shelved in recent years are now being implemented, and a greater number of investments are being made in infrastructure projects and commercial buildings.

The region Asia/Pacific grew by 12.8%, achieving sales of over CHF 1 billion for the first time. The majority of countries achieved double-digit growth rates and increased their market share.

At 15.9%, sales growth remained consistently high in Latin America in 2014. In a demanding business environment, Sika benefited from its strong market presence.

Accelerated development and expansion in the emerging markets continued in 2014. New factories were opened in Brazil, Mexico, Indonesia, Singapore, India and Serbia. Two additional plants were commissioned in the USA. The founding of six new international subsidiaries in Sri Lanka, Bosnia-Herzegovina, Albania, Mozambique, Ivory Coast and Nigeria has created a basis for tapping these new markets.

Sika expects an above-average increase in net profit for the full year. With sales growth exceeding expectations and gross margins improving in the fourth quarter, the operating result (EBIT) is expected to exceed CHF 600 million.

On December 8, 2014, Sika stated its position on the change of control to Saint-Gobain, and on December 17, 2014, it also presented concrete proposals for ensuring that the Sika success story continues. The Board of Directors and Group Management reject the change of control in the currently proposed form. However, they will continue to act in the best interest of Sika and its stakeholders, and this includes holding constructive talks with all the parties involved. The aim is to continue Sika's successful growth strategy without hindrance. 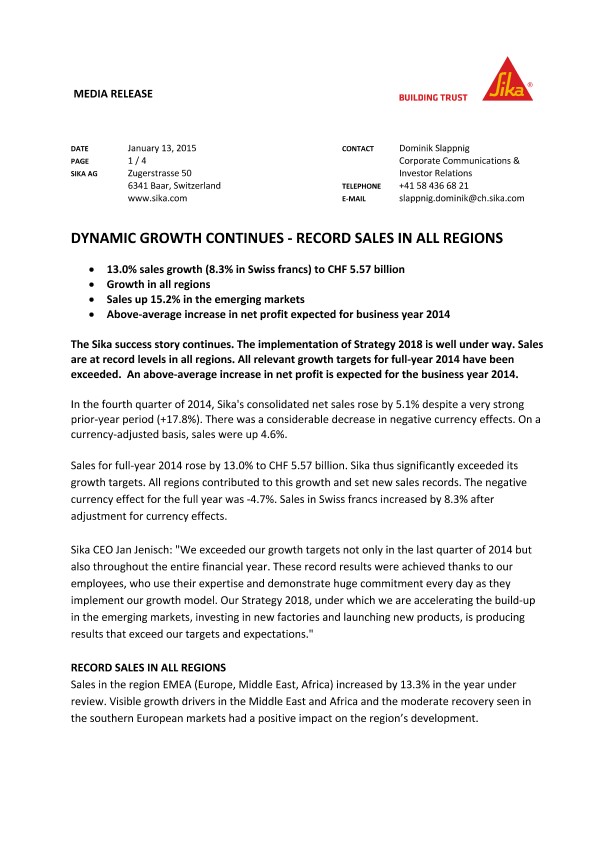