The first nine months of 2016 continued the dynamic sales growth trend with an increase of 6.3% in local currencies. The 5.2% organic growth rate exceeded targets. The stable exchange-rate situation resulted in a modest currency impact (-0.5%) and very pleasing sales growth of 5.8% in Swiss francs to a new record of CHF 4.33 billion.

Despite a challenging third quarter, sales growth continued in all regions and a new quarterly record in operating profit (EBIT) margin of 15.6% (previous year: 13.7%) was achieved. Thus the third quarter marked the 19th consecutive quarter of margin improvement. The outstanding results are based on Sika’s Growth Model with increasing gross margins and disproportionately low cost development. Operating profit, net profit and cash flow posted new record values in the first nine months of the year. Operating profit (EBIT) improved by 20.6% (+ CHF 101 million), net profit rose by 22.9% and cash flow by 43.8%.

Jan Jenisch, CEO: “In 2016, we have successfully continued our growth strategy, with four additional national subsidiaries and eight new factories. The commitment and performance of our employees in what is now 97 countries are the cornerstones of our success. Our sales growth and our ability to improve our margins quarter by quarter are impressive results of our strategy execution. I would like to express my thanks to our global team for their tremendous dedication under partly difficult circumstances. Thanks to this dedication and the strength of our growth model, we can confidently look forward to a record year 2016 and the years to come.”

GROWTH in all regions

The region EMEA (Europe, Middle East, Africa) increased sales in local currencies by 5.3% in the first nine months. Demand in the Western European market, with the core markets of Germany, the UK, France, Spain and Italy, came in at a healthy level. Good growth rates were seen in Eastern Europe. The strongest rise in sales was achieved in Africa, with an increase of more than 20%. Sika has 18 national subsidiaries and 14 production sites on the African continent, and continues to expand its presence. New national subsidiaries have been established in Kuwait, Cameroon and Djibouti, and a further mortar factory opened in Kryoneri, near Athens.

The highest growth was generated by the region North America with a sales increase of 9.9% in local currency. The main growth drivers here are the investments in sales force and the accelerated expansion of the supply chain from 11 to 21 manufacturing sites in the fast-growing metropolitan areas over the past two years. Sika also made two acquisitions during the reporting period with L.M. Scofield, the American market leader in color additives for ready-mix concrete, and FRC Industries, a leading manufacturer of fibers for concrete. Both fields of activity are high-growth market segments of the North American construction industry.

The region Latin America recorded a 5.6% sales increase in local currencies. Mexico, Argentina and Chile developed strongly. By contrast, the continuing economic crisis in Brazil and a significant fall in the value of some local currencies led to a downturn in business activity. Investments in the region included a new mortar products factory in Ecuador, an automotive factory for adhesives and acoustics solutions in Brazil, and the establishment of a new national subsidiary in Nicaragua.

Growth in the region Asia/Pacific increased by 3.8%. Double-digit sales gains were achieved in Southeast Asia and the Pacific area. China reported positive growth figures in the third quarter after six quarters of decline. Sales in Japan were stable. The latest investments in the region include opening a new factory in Perth on the west coast of Australia. Also during the period under review, a second factory for mortar and concrete admixtures was built in Saraburi, Thailand. The first factories were opened in Phnom Penh, Cambodia, and in Yangon, Myanmar, respectively.

Strategy 2018 was successfully continued in the first nine months of 2016 with new record results achieved. The annual targets for 2016 can be confirmed. Sales of around CHF 5.8 billion are expected, as well as a disproportionately high increase in margins with operating profit (EBIT) between CHF 780 and 800 million. The number of growth investments is ahead of schedule with four new national subsidiaries and eight new factories. The unknown outcome of Saint-Gobain’s hostile takeover attempt remains an element of uncertainty for the future. 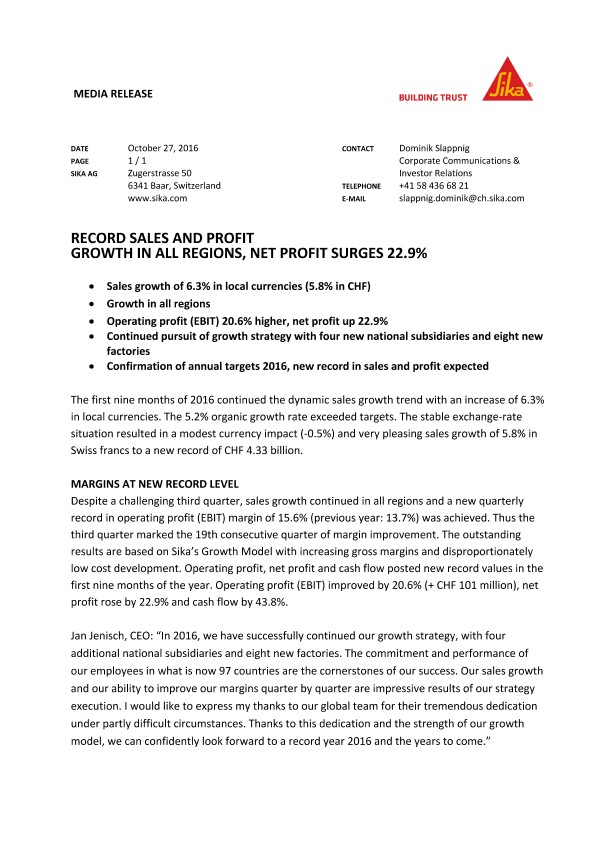 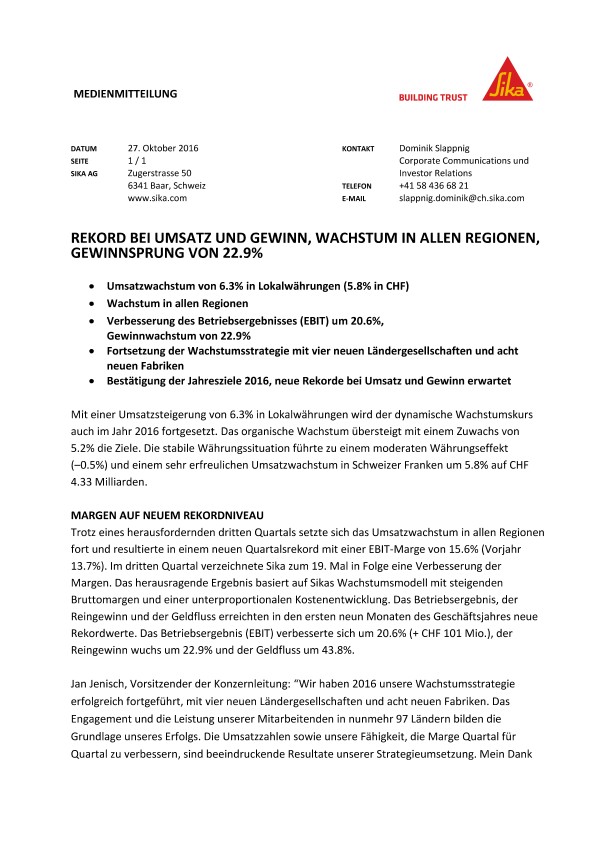 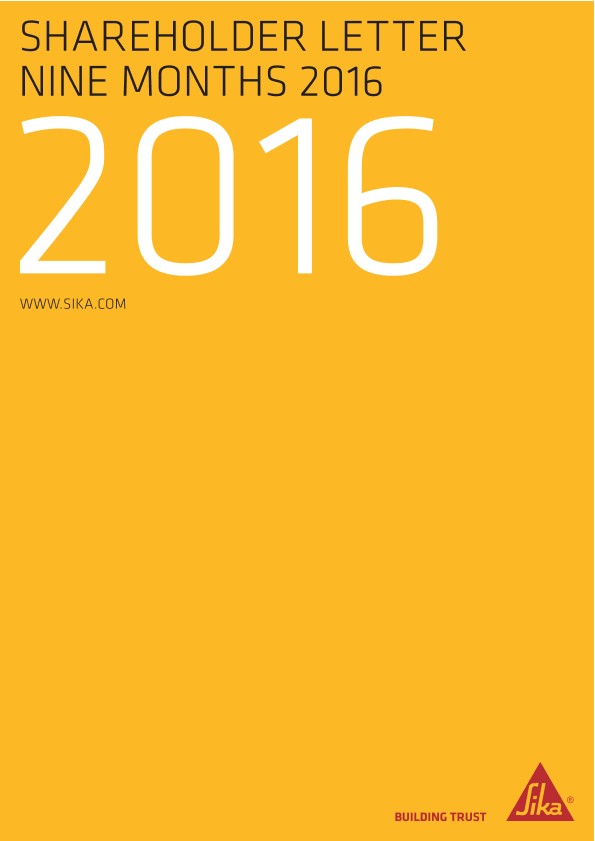 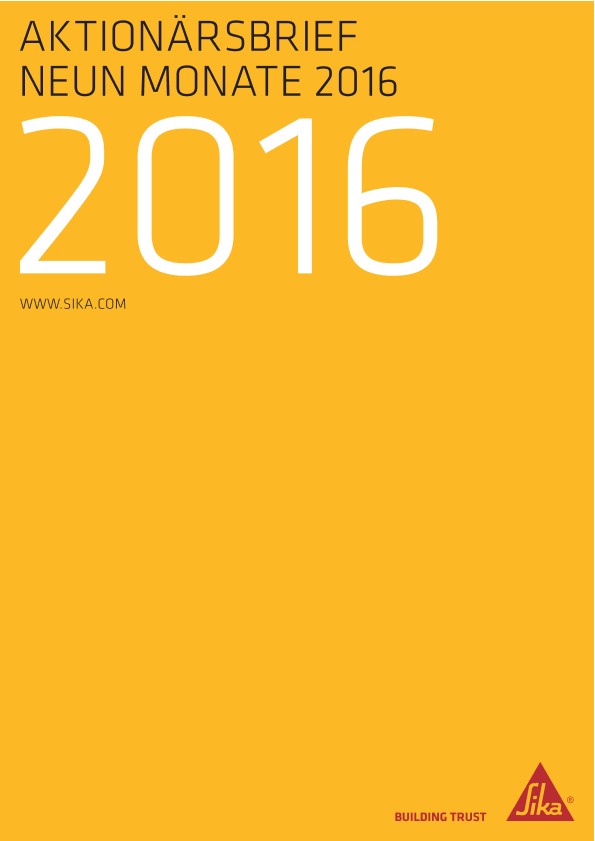