In the 2015 business year, the profitable growth strategy continued with a record year and sales of CHF 5,489.2 million. This equates to an increase of 6.2% in local currencies. All regions contributed to the broad-based growth, as did investments in new factories and national subsidiaries. High growth momentum and disciplined cost management led to new record figures of CHF 673.3 million (+6.3%) for EBIT, CHF 465.1 million (+5.4%) for net profit and CHF 451.5 million (+8.1%) for operating free cash flow.

Jan Jenisch, CEO: "We are delighted that our growth strategy continues to be successful despite the challenging market conditions worldwide. Our thanks in this respect go in particular to the 17,281 employees whose expertise and commitment have brought us another record result. Their energy and ideas have taken Sika to the next level of performance. For the 2016 business year, we are confident we can successfully continue our growth strategy and invest in a further six to eight new factories and three to four new national subsidiaries."

All regions achieved sales increases and market share gains during the 2015 business year, with double-digit sales growth in the core markets of the USA, Mexico, Africa, the Middle East, Southeast Asia and the Pacific. In cumulative terms and in local currencies, sales increased by 6.2%. Excluding the negative growth in the Chinese market, sales rose by 7.4%. The strength of the franc led to conversion effects of -7.7%, and thus to a marginal 1.5% decline in sales in Swiss franc terms to CHF
5,489.2 million.

In the past financial year, the region EMEA (Europe, the Middle East and Africa) increased sales by 5.6%, benefiting from the good business performance in Eastern Europe, Africa and the Middle East. Sales in Western Europe even slightly exceeded the previous year’s strong result.

The greatest sales growth was achieved in the region Latin America. Despite a difficult market environment in Brazil, market share gains in other countries resulted in sales rising by 9.5%. North America recorded a sustained high level of growth, increasing sales by 8.4%. In the USA, continuing market development and the healthy construction sector, where investment in infrastructure and commercial projects is increasing, led to significantly higher volumes.

Growth in the region Asia/Pacific slowed to 2.1% owing to the market downturn in China. However, double-digit sales increases were achieved in Southeast Asia and the Pacific.

Sika's accelerated growth in the emerging markets continued to generate compelling results, with sales rising by 7.9%. The high-margin mortar business – a core component of Sika's Strategy 2018 – put in an above-average performance, with sales growth of 12.9%. Sika further expanded its fast-growing mortar business in the past year by opening five new factories and completing three acquisitions.

In the region Latin America, production capacity was expanded with new factories in Paraguay and Argentina. In Philadelphia, the fifth largest city in the USA, a new factory was commissioned for mortar and concrete admixtures. In the region Asia/Pacific, Sika's first factory in Sri Lanka was opened, while a new national subsidiary was established in Myanmar.

In January 2015, Sika took over Dura-Moza, a company based in Mozambique that manufactures and distributes mortar and tile adhesives. This acquisition will accelerate development and market penetration in Mozambique. In March, Sika acquired BMI, a US company that manufactures and distributes mortar products and systems for the construction industry.

This strong business performance once again underscores the necessity of safeguarding Sika's successful business model in the interests of all stakeholders. Along with its public shareholders, Sika's Board of Directors, Group Management, 160 Senior Managers and employee representatives remain opposed to Saint-Gobain's hostile takeover bid, which they believe would fundamentally jeopardize the Sika success story. There is still no evidence to suggest there is any industrial logic behind the transaction.

Saint-Gobain – a competitor – wants to control Sika by holding just 16% of its capital. This would result in a conflict of interests. Since it is intended that Saint-Gobain would have a majority on the Board of Directors, the interests of public shareholders would no longer be adequately represented.

The Board of Directors and Group Management will therefore continue to act in the interests of Sika and its stakeholders with the aim of guaranteeing the unimpeded continuation of Sika's successful growth strategy.

BOARD OF DIRECTORS PROPOSES PAYMENT OF 8.3% HIGHER DIVIDEND

The strategy review conducted in 2015 has prompted the Board of Directors to modify its targets for the three remaining business years up to 2018. Sika is now aiming for an EBIT margin of 12-14% (previously >10%) and an operating free cash flow of 8% (previously >6%).

The company is also aiming to increase its return on capital employed to 25% (previously >20%) by 2018. The accelerated expansion in growth markets will continue, with investment in six to eight new factories per year and the establishment of new national subsidiaries.

For the current business year, the general conditions in some markets and the currency fluctuations remain a challenge. Even under these conditions, the continuation of Strategy 2018 promises good results. The expectation is sales growth of 6-8% and an above-average increase in margins. Strategy 2018 will be continued in 2016 with the opening of six to eight new factories and three to four national subsidiaries. 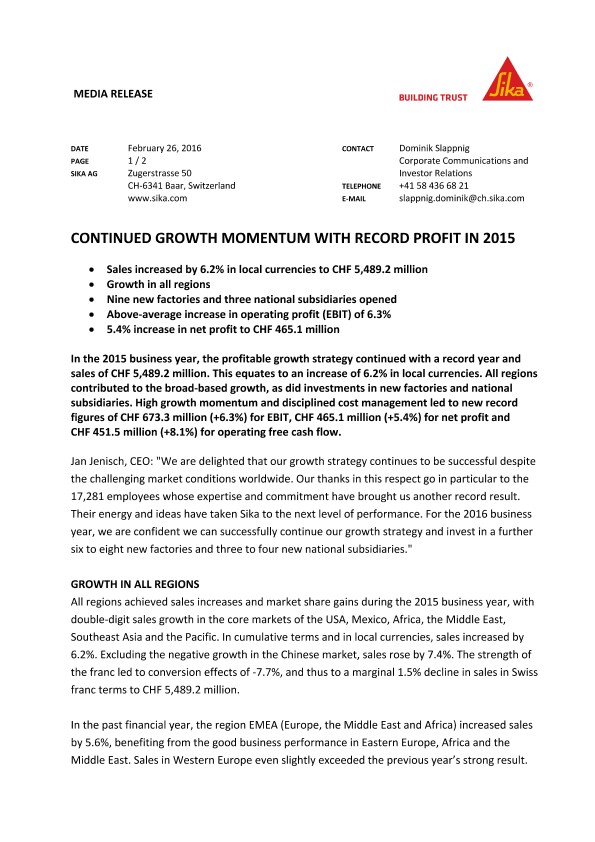 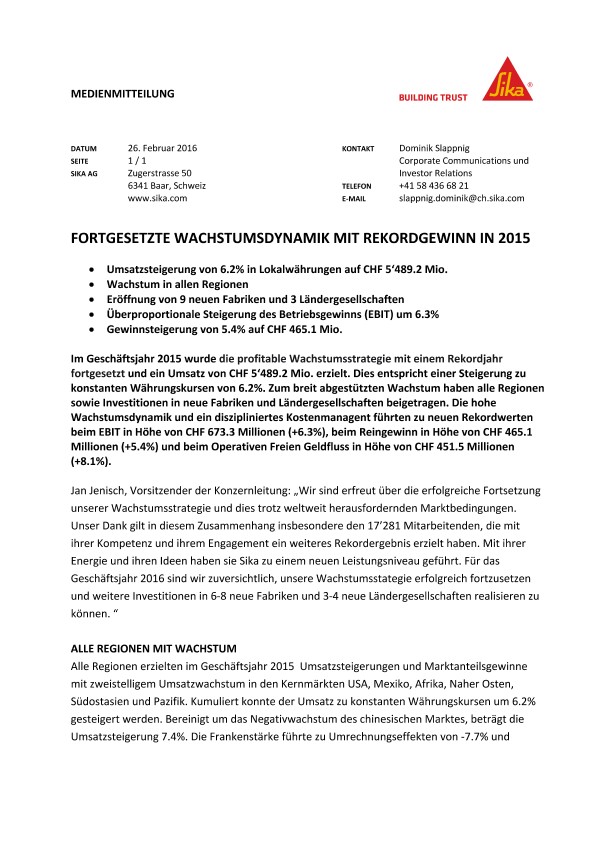 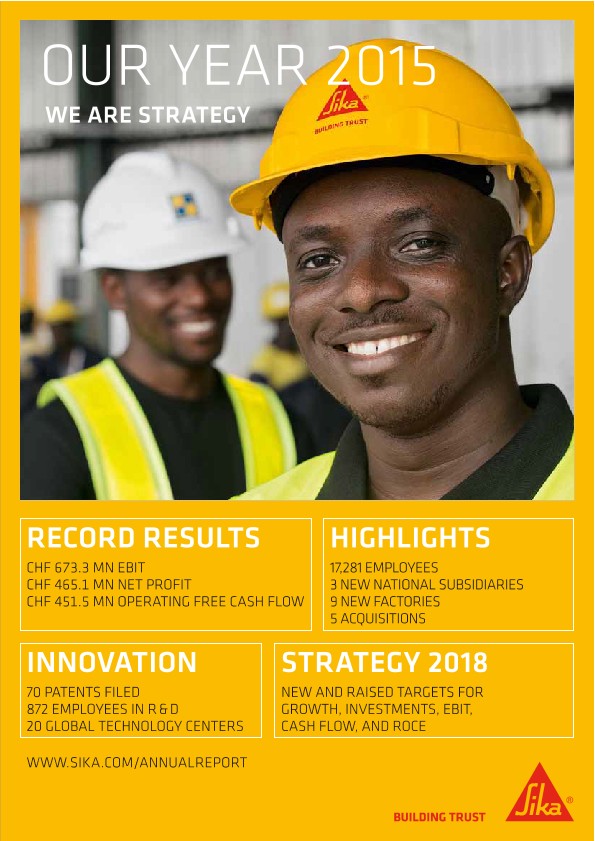