With sales growth of 7.9% in local currency, Sika continued on its successful growth trajectory in the first nine months of the current financial year, achieving record sales of CHF 4,627.5 million. As part of the implementation of the strategic targets for 2020, two further national subsidiaries were founded, four new factories opened and three acquisitions made – the aim being to press ahead with the expansion in high‐growth business areas and markets. Sales growth in Swissfrancs over the past nine months came to 6.8% after taking a negative currency effect into account (‐1.1%).

"With a further sales increase of 7.9%, which is at the upper end of our defined target range, as well as a 14.9% surge in net profit, we are systematically delivering our growth model and achieving record results. We are positioning ourselves early in emerging economies and are well established in mature markets. This enables us to sell our product solutions at all stages of the life cycle of construction properties, from new‐build to refurbishment work. This has resulted in excellent double‐digit growth rates in Eastern Europe, Africa, North America, and the Pacific area, with our growth significantly outpacing that of the market in many countries. In the automotive business we are benefiting from the trend towards lightweight construction, and our sales growth is once again firmly in double digits." Paul Schuler, CEO of Sika

GROWTH in all regions

Sales in region EMEA (Europe, Middle East, Africa) increased by 6.5% in the first nine months (previous year: 5.3%). The core markets of France, Italy and the UK achieved solid growth rates. Eastern Europe and Africa experienced double-digit growth. Dar es Salaam, Tanzania, saw its first factory for concrete admixtures brought into operation, while concrete admixture and mortar production in Almaty, Kazakhstan, was relocated to a new, expanded site. In Russia, a new production line for PVC membranes was set up at the factory in Lobnya, near Moscow. Just recently, manufacturing capacity was expanded at Lahore, Pakistan, with the opening of a new factory for mortar products and concrete admixtures. In addition, Sika's presence in West Africa was further strengthened through the founding of a new national subsidiary in Senegal.

In the first nine months Bitbau Dörr, a leading supplier of waterproofing systems, was acquired in Austria, while ABC Sealants, a well-known manufacturer of sealants and adhesives for the interior finishing sector, was taken over in Turkey. KVK Holding, which is based in the Czech capital, Prague, also joined the Sika Group. The company is an established supplier of waterproofing and roofing systems as well as a wide range of mortar products.

At 16.7%, the North America region posted the strongest growth once again (previous year: 9.9%), of which 8.2% was through acquisitions. Sika boosted its business volume significantly in the USA achieving growth of around 20%, thus continuing to grow much more quickly than the construction market. Targeted investments in North America contributed substantially to this positive business performance. These include the development of the sales organization, the acquisition of companies and the significant expansion of the supply chain with new factories located close to fast-growing metropolitan areas. The conclusion of the takeover of Rmax Operating, LLC during the reporting period enabled a leading US manufacturer of polyiso insulation for complete building envelope solutions (roofing and wall systems) to be integrated into the Sika Group.

The Latin America region increased sales by 1.7% in the first nine months, compared with 5.6% in the same period last year. Some large countries in the region, including Mexico and Argentina, produced above-average performance. In Brazil, the persistently difficult economic and political situation continued to have a negative impact on business performance. Furthermore, construction activity has been subdued in countries that are dependent on the raw material sector. The supply chain in Mexico was further expanded through investment in a new factory for mortar products and concrete admixtures in Coatzacoalcos. Sika's presence in Central America was also reinforced by the foundation of a new national subsidiary in El Salvador.

Sales in the region Asia/Pacific rose by 4.8% (previous year: 3.8%). The markets in Southeast Asia, with the exception of Indonesia and Singapore, achieved high growth rates. In Singapore, investment in state-funded residential construction projects, and in Indonesia investment in infrastructure, remained at a low level. In China, the construction industry stabilized further, enabling Sika to achieve high single-digit growth.

The strategic targets for 2020 were successfully implemented in the first nine months of 2017, leading to record results. The strong performance supports the target for the full year – namely, a 6-8% increase in sales to more than CHF 6 billion for the first time. Volatile and rising raw material prices present a challenge in the current year. Operating profit (EBIT) is expected to once again increase at a disproportionately high rate, reaching between CHF 880 million and 900 million for the full-year 2017. The unknown outcome of Saint-Gobain's hostile takeover attempt remains an element of uncertainty for the future. 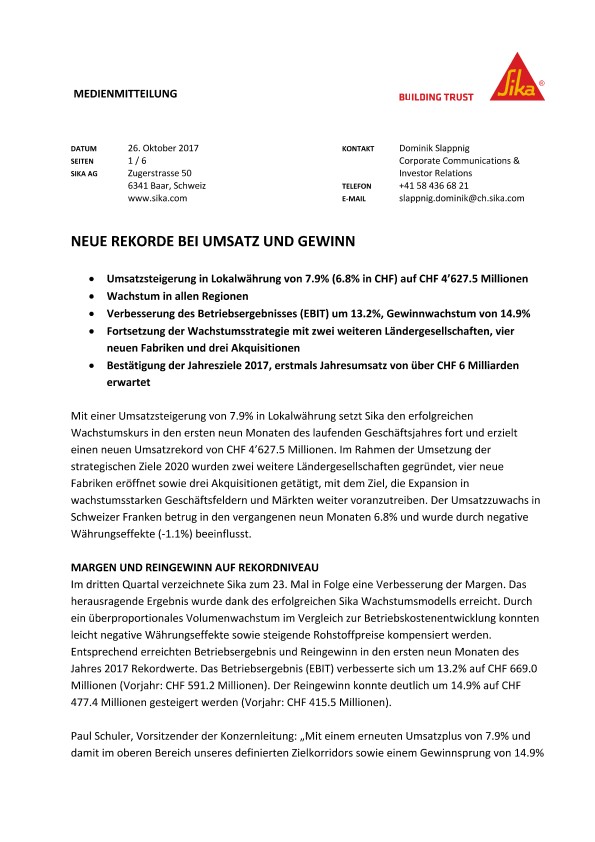 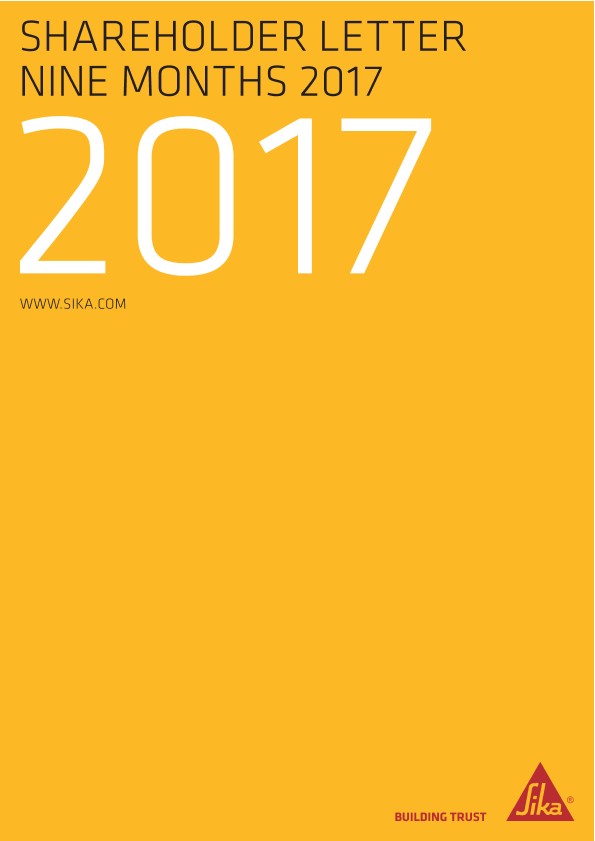 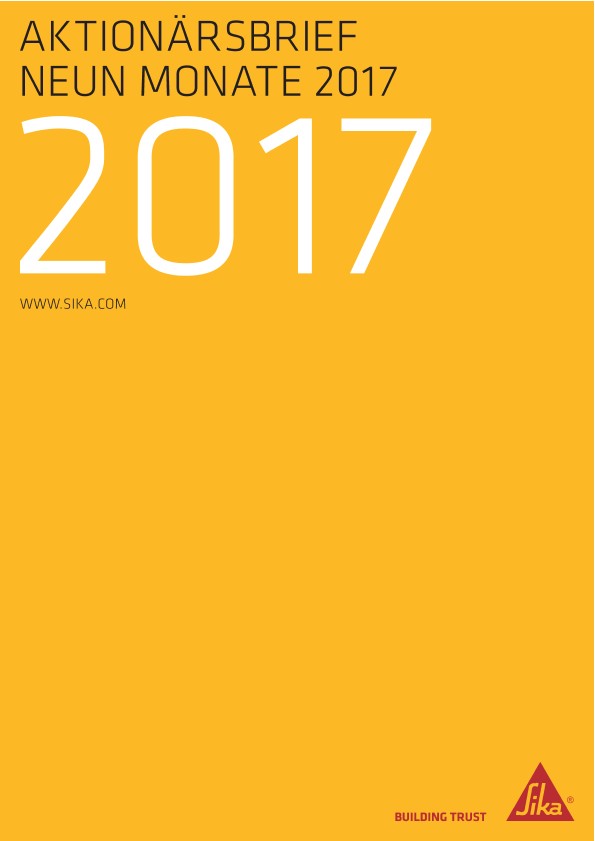