The Sika success story continued in 2016, another record year. In local currencies, sales increased by 5.5% to CHF 5,747.7 million. Growth momentum coupled with disciplined cost management led to new record figures of CHF 795.3 million (+18.1%) for the operating profit and CHF 566.6 million (+21.8%) for net profit. 17 key investments made in the period under review will drive future growth further forward. Since the targets for Strategy 2018 have been reached ahead of schedule, they are once again being raised.

Jan Jenisch, CEO: "We continued our growth strategy with great success in the 2016 business year, once again increasing both sales and earnings. Operating profit, net profit, and operating free cash flow reached new records. By opening nine new factories, establishing four more national subsidiaries and acquiring four companies, we have laid the foundations for ongoing future growth. These 17 key investments, our well-filled product pipeline and our strong sales organization give us reason to look to the future with optimism. My thanks go to our global management team and our 17,419 employees, whose unfailing dedication and tremendous commitment have brought us another record year."

All regions managed to lift sales and gain further market share. Strong, above-average growth rates were recorded in the USA, Mexico, the UK, Africa, Southeast Asia, Australia and the automotive segment. In cumulative terms and in local currencies, sales were up 5.5%. The strength of the Swiss franc led to conversion effects of -0.8%, and thus to a 4.7% increase in sales in Swiss-franc terms to CHF 5,747.7 million.

Sales in the North America region rose by 7.8% in local currencies. This is due in particular to the accelerated expansion of the supply chain and the investments in the sales force in fast-growing metropolitan areas.

The Latin America region recorded a 5.1% sales increase in local currencies. Mexico, Argentina and Chile all developed strongly. By contrast, the continuing economic crisis in Brazil and significant falls in the value of some local currencies led to a downturn in business activity in several countries in the region.

Growth in the Asia/Pacific region was reported at 3.6% in local currencies. The extremely dynamic performance of the markets in Southeast Asia and the Pacific area translated into substantial sales gains. Sika also posted stable second-half growth rates in China.

The accelerated expansion into growth markets continued in 2016 as well, with a total of 17 key investments in nine new factories, four additional national subsidiaries, and four acquisitions.

In the EMEA region a new concrete admixture plant was opened in the Ethiopian capital Addis Ababa, and a mortar factory came on stream in Kyroni, near Athens. New national subsidiaries were established in Kuwait, Cameroon and Djibouti.

With the aim of generating momentum for future growth, three acquisitions were made in the North America region: L.M. Scofield, a leading producer of color additives for ready-mix concrete, and FRC Industries, a manufacturer of fibers for concrete, both joined the Group. The Rmax acquisition enables the expansion of the portfolio for building envelope, wall and roofing insulation technologies.

Investments in Latin America included a new plant for mortar products in Guayaquil, Ecuador, an automotive factory for adhesives and acoustic solutions in São Paulo, Brazil, as well as the establishment of a new national subsidiary in Nicaragua in the capital Managua.

In the Asia/Pacific region, leading mortar producer Ronacrete Ltd. in Hong Kong was acquired. New factories were also opened in Perth, Australia, in Saraburi, Thailand, in Phnom Penh, Cambodia, and in Yangon, Myanmar.

896 Sika employees in R&D drive our innovative strength, many of them working on basic research and the development of new products at the 20 Global Technology Centers. In the 2016 financial year, 72 new patent applications were filed, and a large number of new products were launched in all target markets.

Since the targets of Strategy 2018 had been achieved two years early, Sika’s strategic goals were reviewed in the second half of 2016 in conjunction with senior managers worldwide. The Board of Directors subsequently reaffirmed the growth model and raised the targets. Sika is now aiming for an EBIT margin of 14-16% (previously 12-14%) and operating free cash flow greater than 10% (previously more than 8%). The aim is to achieve a return on capital employed in excess of 25%. By 2020, 30 new factories are to be commissioned and 8 new national subsidiaries established. The annual sales growth target remains at 6-8%. Sika intends to increase EBIT to more than CHF 1 billion by 2020.

POSITION OF THE BOARD OF DIRECTORS UPHELD BY THE COURT

In its decision of October 27, 2016, the Cantonal Court Zug denied all requests of Schenker-Winkler Holding AG (SWH). The Court held that the share transfer restriction (“Vinkulierung”, art. 4 of Sika’s articles of association) applies to the sale of the Sika shares held by SWH to Saint-Gobain. This clear decision by the court of first instance reinforces the position of the independent members of the Board of Directors and legitimizes Sika’s actions over the last two years.

By opening nine new factories, establishing four more national subsidiaries and acquiring four companies, Sika laid the foundations for future growth in 2016. These 17 key investments, the well-filled product pipeline and the strong sales organization give the Group reason to look to the future with optimism.

The goal for the 2017 business year is to continue the growth strategy, increasing sales by 6-8% to an initial figure of CHF 6 billion, opening 8 new factories, and establishing 3 national subsidiaries. EBIT and net profit should continue to increase at a disproportionately high rate. 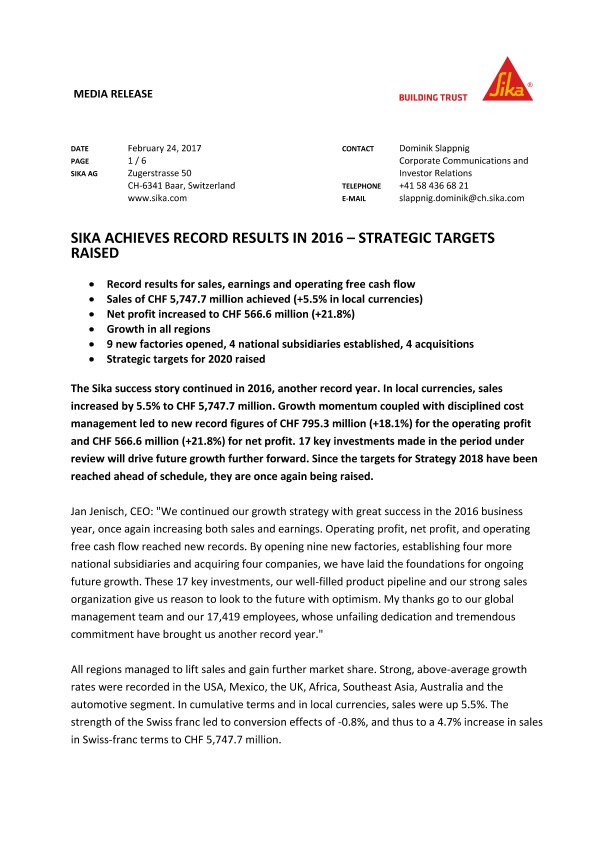 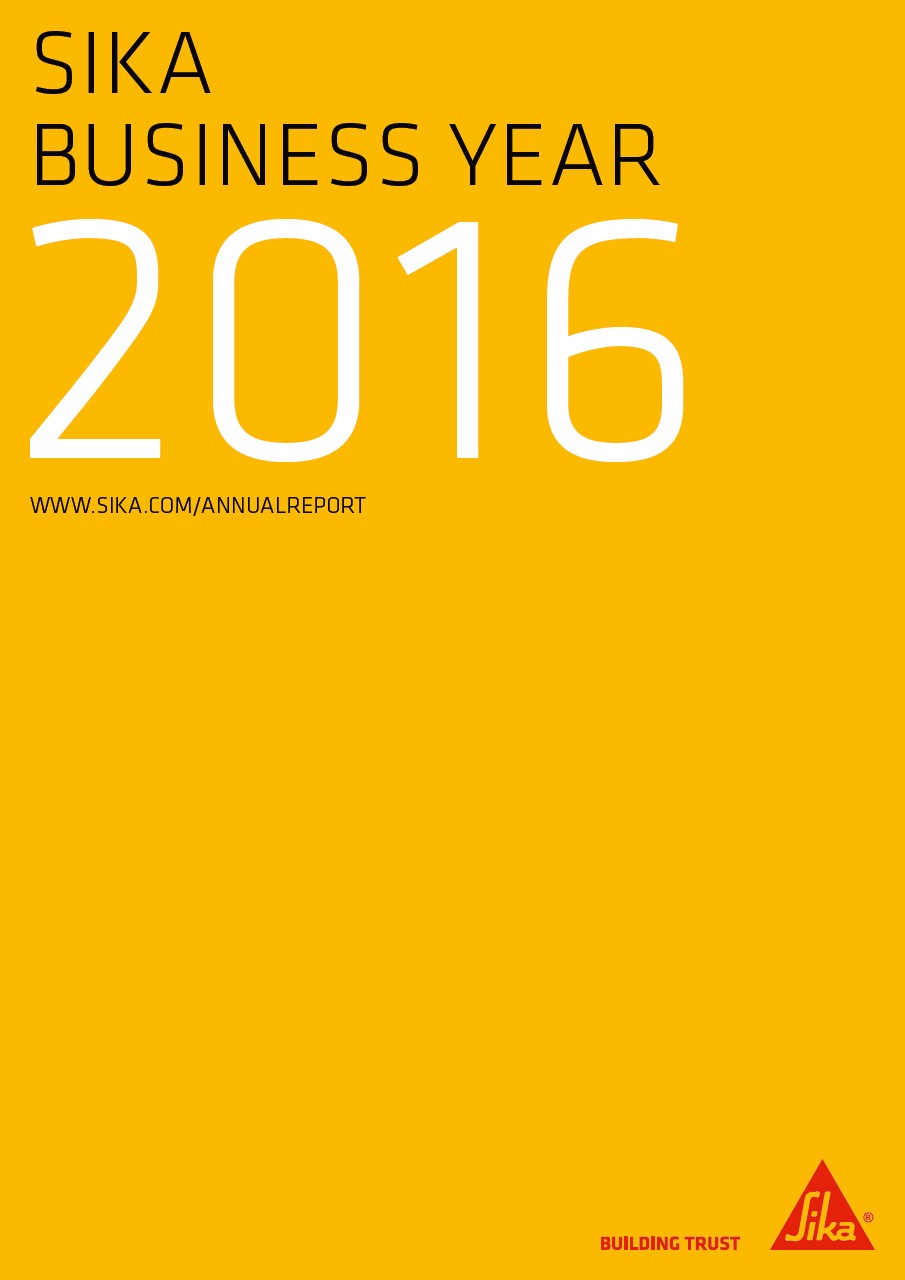 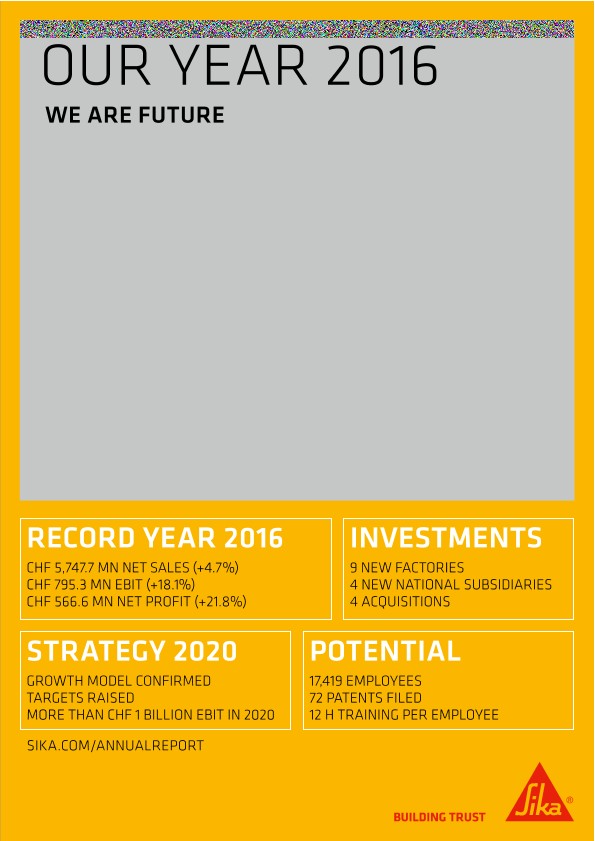