▪ Sales growth of 8.1% (6.7% in CHF) to CHF 2,994.9 million
▪ Growth in all regions
▪ Net profit up 16.0% to CHF 285.7 million
▪ Continuation of the growth strategy with the foundation of a new national subsidiary, opening of three new factories, acquisition of Bitbau Dörr in Austria
▪ Confirmation of annual targets of 6-8% sales growth and disproportionately high growth in profitability

With sales growth of 8.1% in local currency, Sika continues its successful growth trajectory in the first half of 2017 and achieves a new sales record of CHF 2,994.9 million. Targeted investments in new products, national subsidiaries and factories as part of Sika’s growth strategy provided growth stimuli. In the first half of the year, the negative currency effect (-1.4%) reduced sales growth in Swiss francs to 6.7%.

"With a clear sales increase of 8.1% and a surge in net profit of 16.0%, we are continuing to consistently and successfully deliver our growth strategy. We posted double-digit growth rates in Eastern Europe, Africa, North America, Argentina, the Pacific area and in our automotive business, and we have clearly grown much faster than the market in a number of countries. The positive performance in the first half of 2017, the opening of a further national subsidiary, and the commissioning of three new factories all bring us one step closer to achieving our strategic targets for 2020. Sika’s success is based on team effort. Thanks to the commitment of our employees and the strength of our growth model, we can look forward to the further business performance in the second half of 2017." Paul Schuler, CEO of Sika

In the first half of the year, sales in the EMEA region (Europe, Middle East, Africa) increased by 7.0% (previous year: 6.6%). The core markets Germany, France, Switzerland, Italy and the UK achieved solid growth rates. Eastern Europe and Africa posted double-digit growth. Bitbau Dörr, a leading manufacturer of waterproofing systems, was acquired in Austria. Furthermore, a new factory for concrete admixtures was opened in Tanzania and a further national subsidiary was founded in Senegal. In Kazakhstan, concrete admixture and mortar production in Almaty was relocated to a larger site.

At 17.4%, it was the North America region that posted the strongest growth (previous year: 12.7%), of which 8.7% was through acquisitions. Sika boosted its business volume significantly in the USA achieving strong double-digit growth of around 20%, thus growing much more quickly than the North American construction market. Targeted investments that have been made in North America over the last few years contributed substantially to this positive business performance. These include the investment in sales force, the acquisition of companies and the expansion of the supply chain with new factories close to fast-growing metropolitan areas.

In the Latin America region sales increased by 2.7% in the first half-year, compared to 5.9% in the corresponding period of the previous year. In particular, the large countries in the region, including Mexico and Argentina, produced above-average performance. In Brazil, the effects of the difficult economic and political situation continued to have a restrictive impact on business. Furthermore, construction activity in the raw material-based countries in the region has been subdued. In the southeast of Mexico, a new factory for mortar products came into operation.

Sales in the Asia/Pacific region increased by 4.1% (previous year: 4.6%). The markets in Southeast Asia, with the exception of Indonesia and Singapore, achieved high growth rates. In Singapore, investment in state-funded residential construction projects remained at a low level, while in Indonesia investments in infrastructure fell. In China, the construction industry continued to stabilize in the first half of 2017, enabling Sika to achieve high single-digit growth.

The strategic targets 2020 were successfully pursued in the first half of 2017, with new record results achieved. The strong start to the year supports the target for the full year, which aims at a 6-8% increase in sales to more than CHF 6 billion for the first time. Volatile and rising commodity prices present a challenge in the current year. EBIT and net profit are once again expected to increase at disproportionately high rates. The successful growth strategy with the new targets for 2020 will continue in 2017. The unknown outcome of Saint-Gobain’s hostile takeover attempt remains an element of uncertainty for the future. 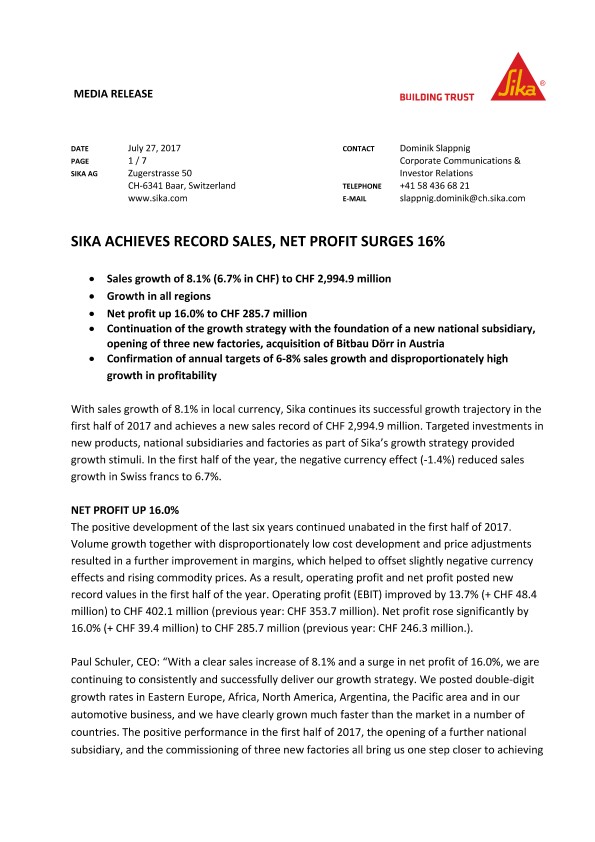 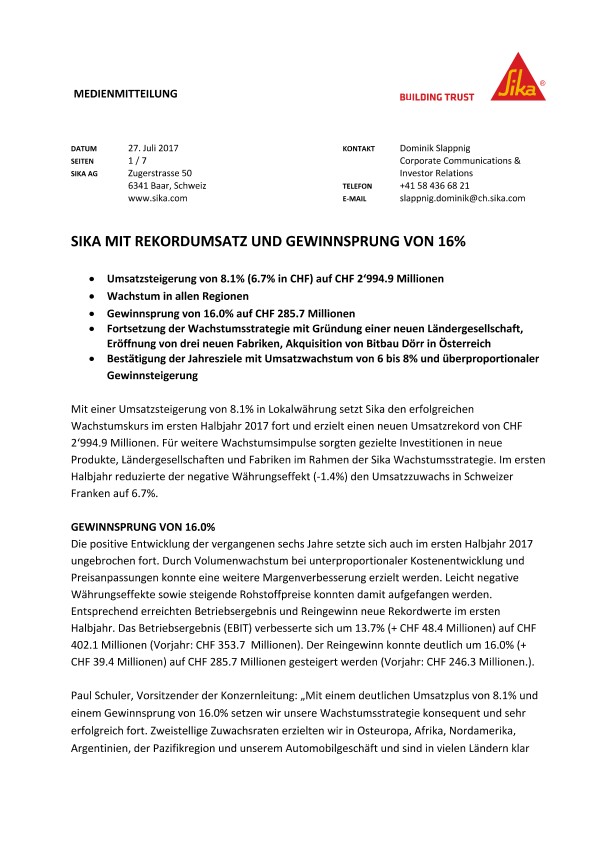 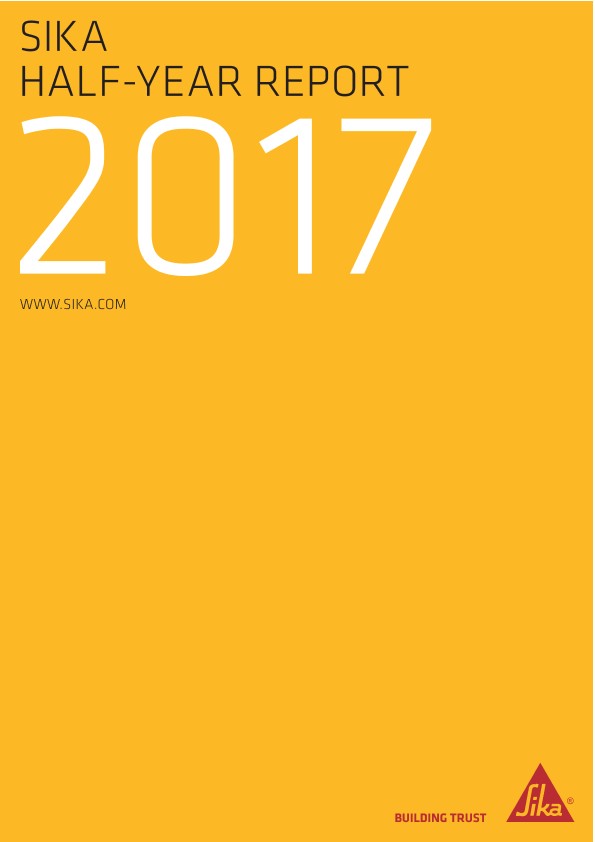 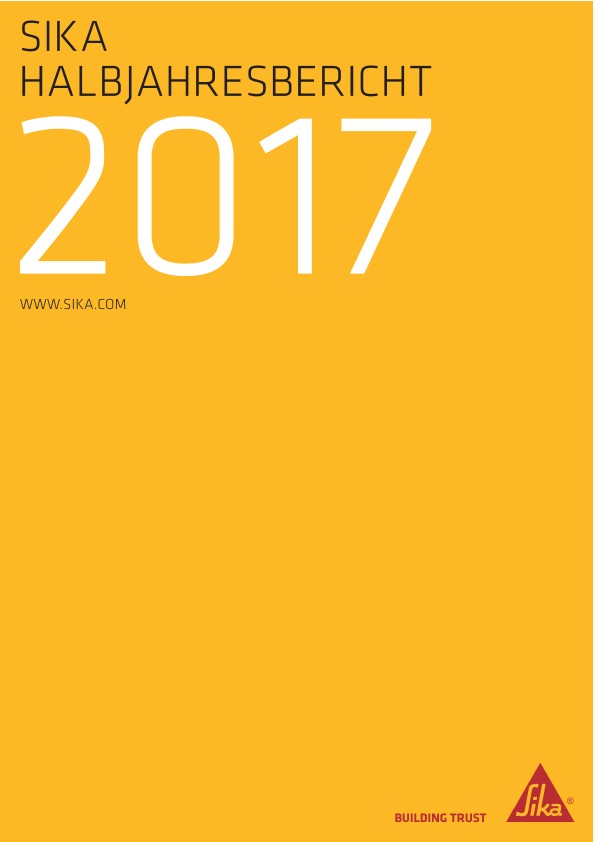