Strong Start to the Year with 10.7% Sales Growth in the First Quarter of 2017

▪ 10.7% sales growth in local currencies to CHF 1,389.0 million
▪ Dynamic growth in all regions
▪ Opening of one new factory, acquisition of one company
▪ Sales to exceed CHF 6 billion in 2017

With double-digit sales growth in the first quarter, a new sales record of CHF 1,389.0 million was set. This equates to an increase of 10.7% in local currencies (previous year: 8.3%). A moderate currency effect (-1.7%) led to strong sales growth in Swiss francs of 9.0%. High organic growth of 8.5% was recorded. The solid growth in all regions was boosted by additional working days compared with the previous year.

Jan Jenisch, CEO: “The strong start to the year is the result of our successful strategy implementation. Our investments in new products, national subsidiaries and factories are paying off, enabling us to exploit the potential of growth markets for Sika quickly. We will be implementing our growth model with raised targets for 2020, and opening eight new factories and a further three national subsidiaries in 2017.”

At 19.2%, it was the North America region that posted the strongest growth (previous year: 12.6%), of which 9.7% was through acquisitions. Sika boosted its business volume significantly in the USA, achieving strong double-digit growth of over 20%. Investments in expanding the supply chain and sales force in fast-growing metropolitan areas, and the upswing in the construction sector, contributed substantially to this successful business performance.

With a sales increase of 6.7% in the first quarter of this financial year, growth in the
Latin America region exceeded the 4.0% achieved in the equivalent period of the previous year. Mexico, Argentina and Uruguay produced above-average performance, but the consequences of the economic crisis continued to have an impact on business in Brazil. In the southeast of Mexico, a new mortar production facility came into operation.

Growth in the Asia/Pacific region increased to 6.8% (previous year: 4.3%). The markets in South-east Asia and the Pacific area achieved the highest growth rates, recording substantial rates of increase. Business in China developed well, with double-digit sales growth in the first quarter.

The strong start to the year supports the outlook for the business year 2017. Sika targets a 6-8% rise in sales to more than CHF 6 billion for the first time. Volatile and rising commodity prices present a key challenge in the current financial year. EBIT and net profit should continue to increase at a disproportionately high rate. The growth strategy will be pursued in 2017 with the opening of eight new factories and the founding of a further three national subsidiaries.

Net Sales in the first three months of 2017 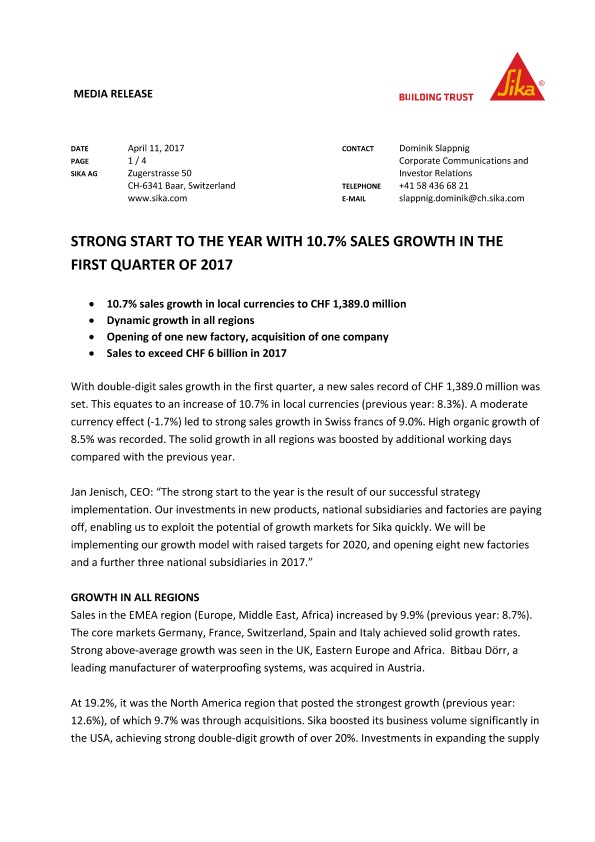 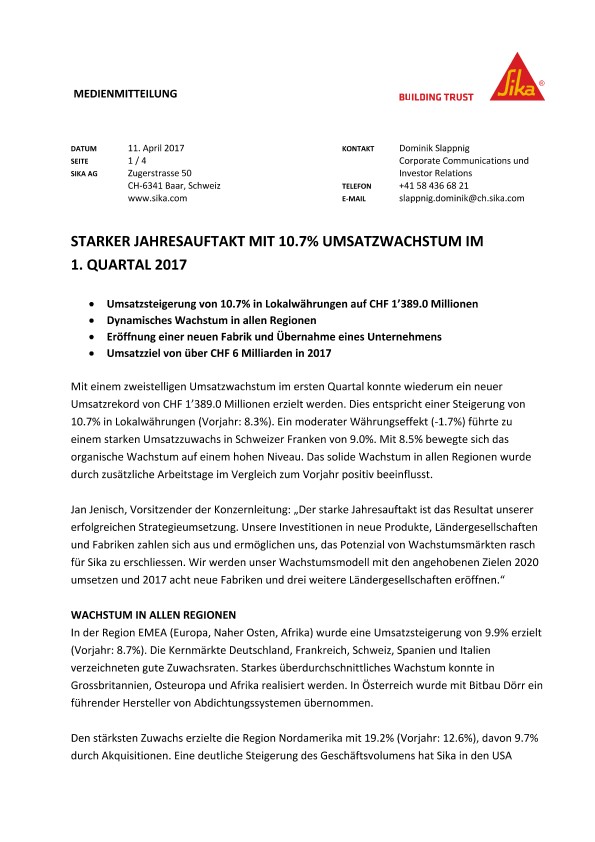