▪ Sales growth of 8.9% in local currencies to CHF 6.25 billion in 2017
▪ Accelerated fourth‐quarter growth of 12.0%
▪ Growth in all regions
▪ Opening of 9 factories, founding of 3 national subsidiaries, acquisition of 7 companies
▪ Disproportionately high growth in profit expected for the year as a whole
▪ Outlook 2018: Sales increase of more than 10% expected

Sika proved its ability to generate strong growth once again in 2017, increasing sales in local currencies by 8.9% to the equivalent of CHF 6.25 billion. Development in the fourth quarter was particularly dynamic, with growth in local currencies amounting to 12.0% and organic growth coming in at 8.5%. The positive development of business in all regions, together with investments in new factories, the founding of further national subsidiaries and the market launch of new products all contributed to Sika’s strong growth. A record net profit figure is expected for the 2017 financial year.

Over the last year, Sika succeeded in increasing its sales by 8.9% in local currencies to a total of CHF 6.25 billion, thereby significantly exceeding the CHF 6 billion mark for the first time. The fourth quarter was characterized by dynamic growth. All regions managed to boost sales and gain further market share. Disproportionately high growth rates were achieved in the USA, Mexico, Argentina, China, Southeast Asia, Pacific, the Middle East, Eastern Europe and Africa, as well as in the automotive area.

"We continued to successfully implement our growth strategy in the 2017 financial year, generating an 8.9% increase in sales. As a result, we expect to break new records for both the operating result and net profit. With nine new factories, three further national subsidiaries, and seven company takeovers, we have made significant investment in growth markets as well as in growth platforms in the form of product technologies and distribution channels. These 19 strategic investments, our pipeline with innovative quality products and our global presence – we now have 100 national subsidiaries and more than 200 factories – allow us to look toward the future with optimism. I am grateful to our global workforce of more than 18,000 employees and the management team, who have together delivered another record sales year thanks to their loyalty, their expertise and their impressive commitment." Paul Schuler, CEO of Sika

In 2017, sales in the EMEA region (Europe, Middle East, Africa) increased by 7.4% in local currencies (previous year: 4.8%). The major EU countries with the core markets of France, Italy and the United Kingdom, recorded strong growth rates. The Middle East, Eastern Europe and Africa all delivered double‐digit growth. In Africa, Sika’s presence was further strengthened through the founding of a new national subsidiary in Senegal and the commencement of operations at three new factories. In both Dar es Salaam, Tanzania, and Douala, Cameroon, the first factories for concrete admixtures were brought into operation, while a second factory for the local production of mortar products was established in Luanda, Angola. In Kazakhstan, concrete admixture and mortar production in Almaty was transferred to a larger site. In Russia, a new production line for PVC membranes was set up at the factory in Lobnya, near Moscow. Just recently, manufacturing capacity was expanded at Lahore, Pakistan, with the opening of a new factry for mortar products and concrete admixtures. A new facility for the production of high‐performance, reinforcing fibers for concrete clients in the EMEA region commenced operations at the Troisdorf site in Germany. Bitbau Dörr, a leading supplier of waterproofing systems, was acquired in Austria, while ABC Sealants, a well‐known manufacturer of sealants and adhesives for the interior finishing sector, was taken over in Turkey. KVK Holding, which is based in the Czech capital, Prague, also joined the Sika Group. The company is an established supplier of waterproofing and roofing systems as well as a wide range of mortar products.

The North America region posted the strongest growth of 18.4% (previous year: 7.8%), of which 8.5% was generated through acquisitions. With a sales increase of around 20%, Sika significantly boosted its business volume in the USA, thus growing at a much faster rate than the local construction market in 2017. Targeted investments in North America over the last few years contributed substantially to this positive business performance. These include the development of the sales organization, the implementation of the growth strategy through the acquisition of companies, and the significant expansion of the supply chain with new factories located close to fast‐growing metropolitan areas. At the end of last year, a new factory for concrete admixtures and mortar was opened near Houston, with a view to tapping into the huge growth potential of the construction market in Texas and the wider south‐west of the USA.

The Sika Group’s offering for concrete contractors was expanded with the takeover of Butterfield Color Inc., a leading manufacturer of decorative concrete floors and systems in the USA, while at the end of the year it also acquired Emseal Joint Systems, Ltd., a high‐performance supplier of structural expansion joints.

The Latin America region increased sales by 3.2% (previous year: 5.0%). Both Mexico and Argentina generated above‐average growth. Construction activity in this region is still subdued in the countries that are more dependent on the raw material sector. The supply chain in Mexico, a strongly growing market, was further expanded through investment in a new factory for mortar products and concrete admixtures in Coatzacoalcos. Sika's presence in Central America was also reinforced by the foundation of a new national subsidiary in El Salvador.

The acquired brands of Grupo Industrial Alce have strengthened Sika's presence in Mexico in respect of both major projects and local specification capabilities. Moreover, the additional production site close to Mexico City facilitates the rapid supply of liquid‐applied and bituminous membranes to this huge metropolis.

Sales in the Asia/Pacific region rose by 5.2% (previous year: 3.6%). High growth rates were achieved in China, the Pacific area and the markets of Southeast Asia, with the exception of Singapore, where the construction economy has weakened on the back of lower subsidies for state‐funded residential construction projects. Sika reached a major milestone in Asia: following the founding of a new national subsidiary in Bangladesh, the Group is now represented in 100 countries worldwide.

In “Other Segments and Activities” Sika achieved a sales growth of 13.8% (previous year: 11.6%). The automotive business, which is managed centrally on a global basis, forms a key part of this segment. With an organic growth of 19.3% in the fourth quarter, Sika significantly exceeded market growth. At the year‐end Faist ChemTec Group was acquired, a leading provider of acoustic systems for the automotive industry, which is headquartered in Worms, Germany.

For the business year 2017, operating profit (EBIT) is expected to increase at a disproportionately high rate, reaching between CHF 880 million and 900 million.

In the business year 2018, Sika expects a sales increase of more than 10%. Volatile and rising commodity prices will continue to present a challenge in the current year. In China, for example, access to raw materials has been impaired by environmental constraints introduced by the government. Operating profit (EBIT) should enjoy a disproportionate high rise in 2018.

With investments in nine new factories, three additional national subsidiaries and seven acquisitions, the basis for future growth has been established. These 19 key investments, together with the well‐filled pipeline of new products and the strong sales organization, allow the Group to look with much confidence to the future. 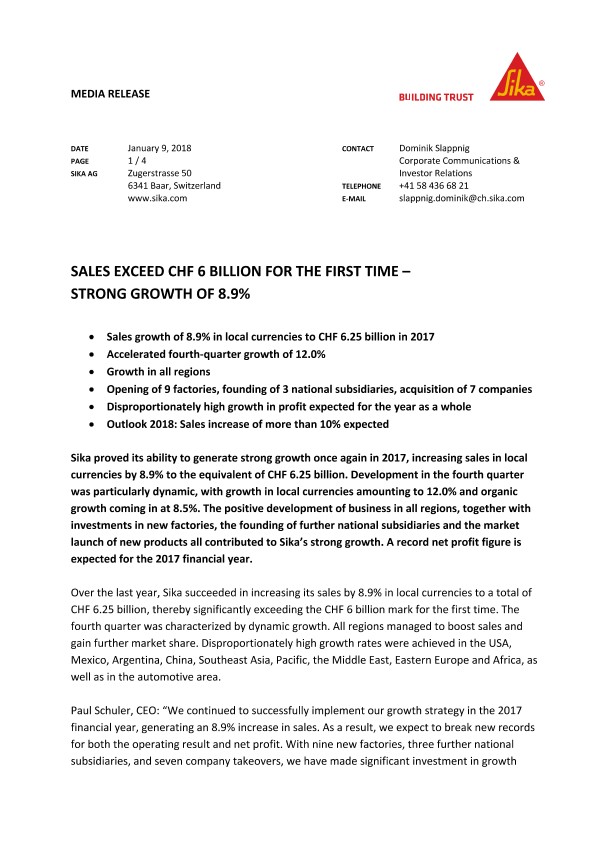 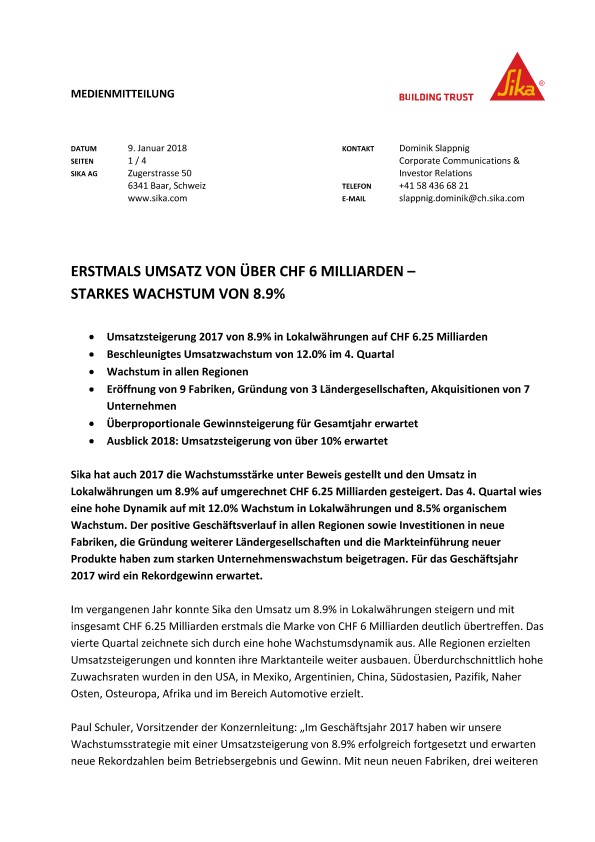