Sika AG Announces the Launch of an Offering of up to CHF 1,300 Million Subordinated Mandatory Convertible Notes Due 2022

Sika AG ("Sika") announces the launch of an offering (the "Offering") of up to CHF 1,300 million subordinated mandatory convertible notes due 2022 (the "Notes"). Sika intends to use the net proceeds from the Offering to fund the recently announced acquisition of Parex and for general corporate purposes.

The Notes will be mandatorily converted into new or existing registered shares of Sika at maturity, subject to the early conversion rights of Sika and noteholders in accordance with the terms and conditions of the Notes.

The Notes will be issued at 100% of their principal amount in denominations of CHF 200,000. The Notes are expected to carry interest of between 3.75% and 4.00% per annum payable annually in arrears. The Notes are expected to have a minimum conversion price equal to the reference share price and a maximum conversion price set at a premium of between 12.5% and 15.0% over the reference share price.

The reference share price is expected to be equal to the share price determined in a concurrent placement of existing shares from hedging transactions of individual mandatory convertible notes investors. The Notes will be subordinated obligations of Sika, as described in the terms and conditions of the Notes.

Sika will announce the final terms of the Offering, including the coupon, maximum conversion price, reference share price and issue size after completion of an accelerated bookbuilding process, which is expected to be finalized before opening of business on January 23, 2019.

The Offering consists of a public offering in Switzerland and private placements of Notes to professional investors only in other jurisdictions. The Notes will be offered to investors outside the United States in compliance with Regulation S under the US Securities Act of 1933, and otherwise in accordance with applicable securities laws, rules and regulations.

The Settlement of the Offering is expected to take place on January 30, 2019. An application will be made for the listing and trading of the Notes on SIX Swiss Exchange Ltd. Sika intends to apply for the Notes to be rated by S&P.

Sika has agreed to a lock-up period expiring 90 days after the date on which the pricing terms of the Notes are finalized.

IMPORTANT NOTICE
NO ACTION HAS BEEN TAKEN BY SIKA, THE JOINT BOOKRUNNERS OR ANY OF THEIR RESPECTIVE AFFILIATES THAT WOULD PERMIT AN OFFERING OF THE NOTES OR POSSESSION OR DISTRIBUTION OF THIS PRESS RELEASE OR ANY OFFERING OR PUBLICITY MATERIAL RELATING TO THE NOTES IN ANY JURISDICTION WHERE ACTION FOR THAT PURPOSE IS REQUIRED. PERSONS INTO WHOSE POSSESSION THIS PRESS RELEASE COMES ARE REQUIRED BY SIKA AND THE JOINT BOOKRUNNERS TO INFORM THEMSELVES ABOUT, AND TO OBSERVE, ANY SUCH RESTRICTIONS.

SOLELY FOR THE PURPOSES OF THE PRODUCT GOVERNANCE REQUIREMENTS CONTAINED WITHIN: (A) EU DIRECTIVE 2014/65/EU ON MARKETS IN FINANCIAL INSTRUMENTS, AS AMENDED (“MIFID II”); (B) ARTICLES 9 AND 10 OF COMMISSION DELEGATED DIRECTIVE (EU) 2017/593 SUPPLEMENTING MIFID II; AND (C) LOCAL IMPLEMENTING MEASURES (TOGETHER, THE “MIFID II PRODUCT GOVERNANCE REQUIREMENTS”), AND DISCLAIMING ALL AND ANY LIABILITY, WHETHER ARISING IN TORT, CONTRACT OR OTHERWISE, WHICH ANY “MANUFACTURER” (FOR THE PURPOSES OF THE MIFID II PRODUCT GOVERNANCE REQUIREMENTS) MAY OTHERWISE HAVE WITH RESPECT THERETO, THE NOTES HAVE BEEN SUBJECT TO A PRODUCT APPROVAL PROCESS, WHICH HAS DETERMINED THAT: (I) THE TARGET MARKET FOR THE NOTES IS ELIGIBLE COUNTERPARTIES AND PROFESSIONAL CLIENTS ONLY, EACH AS DEFINED IN MIFID II (EXCEPT FOR IN SWITZERLAND, WHERE THE NOTES ARE THE SUBJECT OF A PUBLIC OFFERING, WHICH MAY INCLUDE OFFERINGS TO NON-PROFESSIONAL INVESTORS); AND (II) ALL CHANNELS FOR DISTRIBUTION OF THE NOTES TO ELIGIBLE COUNTERPARTIES AND PROFESSIONAL CLIENTS ARE APPROPRIATE. ANY PERSON SUBSEQUENTLY OFFERING, SELLING OR RECOMMENDING THE NOTES (A "DISTRIBUTOR") SHOULD TAKE INTO CONSIDERATION THE MANUFACTURERS’ TARGET MARKET ASSESSMENT; HOWEVER, A DISTRIBUTOR SUBJECT TO MIFID II IS RESPONSIBLE FOR UNDERTAKING ITS OWN TARGET MARKET ASSESSMENT IN RESPECT OF THE NOTES (BY EITHER ADOPTING OR REFINING THE MANUFACTURERS’ TARGET MARKET ASSESSMENT) AND DETERMINING APPROPRIATE DISTRIBUTION CHANNELS.

THE TARGET MARKET ASSESSMENT IS WITHOUT PREJUDICE TO THE REQUIREMENTS OF ANY CONTRACTUAL OR LEGAL SELLING RESTRICTIONS IN RELATION TO ANY OFFERING OF THE NOTES.

FOR THE AVOIDANCE OF DOUBT, THE TARGET MARKET ASSESSMENT DOES NOT CONSTITUTE: (A) AN ASSESSMENT OF SUITABILITY OR APPROPRIATENESS FOR THE PURPOSES OF MIFID II; OR (B) A RECOMMENDATION TO ANY INVESTOR OR GROUP OF INVESTORS TO INVEST IN, OR PURCHASE, OR TAKE ANY OTHER ACTION WHATSOEVER WITH RESPECT TO THE NOTES.

THIS DOCUMENT DOES NOT CONSTITUTE AN OFFER OR INVITATION TO SUBSCRIBE FOR OR PURCHASE ANY SECURITIES NOR DOES IT CONSTITUTE A PROSPECTUS WITHIN THE MEANING OF ARTICLES 652A OR 1156 OF THE SWISS CODE OF OBLIGATIONS OR A LISTING PROSPECTUS PURSUANT TO THE LISTING RULES OF THE SIX SWISS EXCHANGE. ANY DECISION TO PURCHASE ANY SECURITIES REFERRED TO HEREIN SHOULD BE SOLELY BASED ON THE RELEVANT PROSPECTUS, WHICH IS EXPECTED TO BE PUBLISHED ON OR AROUND THE DATE HEREOF BY SIKA AG AND IS AVAILABLE FREE OF CHARGE AT UBS AG, PROSPECTUS LIBRARY, P.O. BOX, CH-8098 ZURICH, SWITZERLAND (TELEPHONE: +41 44 239 47 03, FAX: +41 44 239 69 14 OR E-MAIL: SWISS-PROSPECTUS@UBS.COM).

ANY DECISION TO PURCHASE ANY OF THE NOTES SHOULD ONLY BE MADE ON THE BASIS OF AN INDEPENDENT REVIEW BY A PROSPECTIVE INVESTOR OF SIKA’S PUBLICLY AVAILABLE INFORMATION. NEITHER THE JOINT BOOKRUNNERS NOR ANY OF THEIR RESPECTIVE AFFILIATES ACCEPT ANY LIABILITY ARISING FROM THE USE OF, OR MAKE ANY REPRESENTATION AS TO THE ACCURACY OR COMPLETENESS OF, THIS PRESS RELEASE OR SIKA’S PUBLICLY AVAILABLE INFORMATION.

THE INFORMATION CONTAINED IN THIS PRESS RELEASE IS SUBJECT TO CHANGE IN ITS ENTIRETY WITHOUT NOTICE UP TO THE SETTLEMENT DATE.

EACH PROSPECTIVE INVESTOR SHOULD PROCEED ON THE ASSUMPTION THAT IT MUST BEAR THE ECONOMIC RISK OF AN INVESTMENT IN THE NOTES OR THE SHARES TO BE ISSUED OR TRANSFERRED AND DELIVERED UPON CONVERSION OF THE NOTES AND NOTIONALLY UNDERLYING THE NOTES (TOGETHER WITH THE NOTES, THE “SECURITIES”). NEITHER SIKA NOR THE JOINT BOOKRUNNERS MAKE ANY REPRESENTATION AS TO (I) THE SUITABILITY OF THE SECURITIES FOR ANY PARTICULAR INVESTOR, (II) THE APPROPRIATE ACCOUNTING TREATMENT AND POTENTIAL TAX CONSEQUENCES OF INVESTING IN THE SECURITIES OR (III) THE FUTURE PERFORMANCE OF THE SECURITIES EITHER IN ABSOLUTE TERMS OR RELATIVE TO COMPETING INVESTMENTS.

EACH OF SIKA, THE JOINT BOOKRUNNERS AND THEIR RESPECTIVE AFFILIATES EXPRESSLY DISCLAIMS ANY OBLIGATION OR UNDERTAKING TO UPDATE, REVIEW OR REVISE ANY STATEMENT CONTAINED IN THIS PRESS RELEASE WHETHER AS A RESULT OF NEW INFORMATION, FUTURE DEVELOPMENTS OR OTHERWISE. 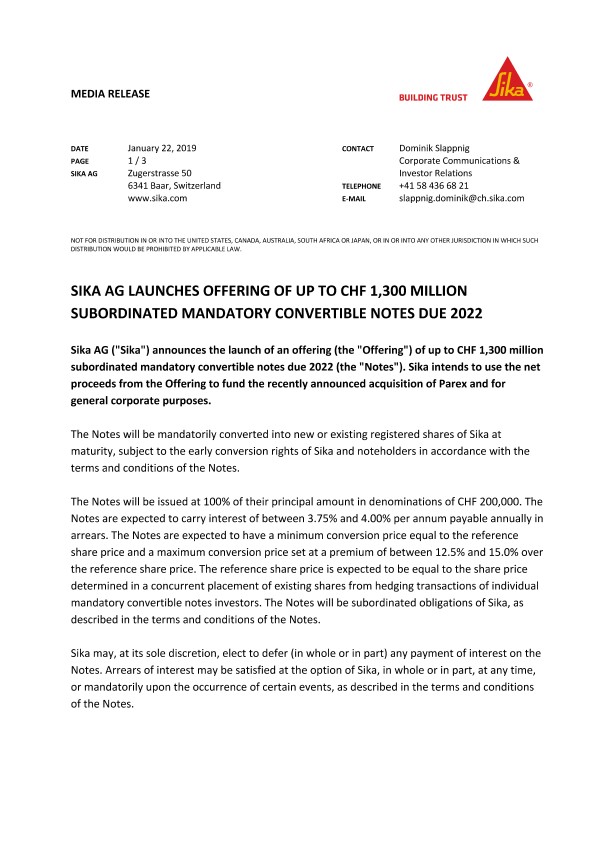 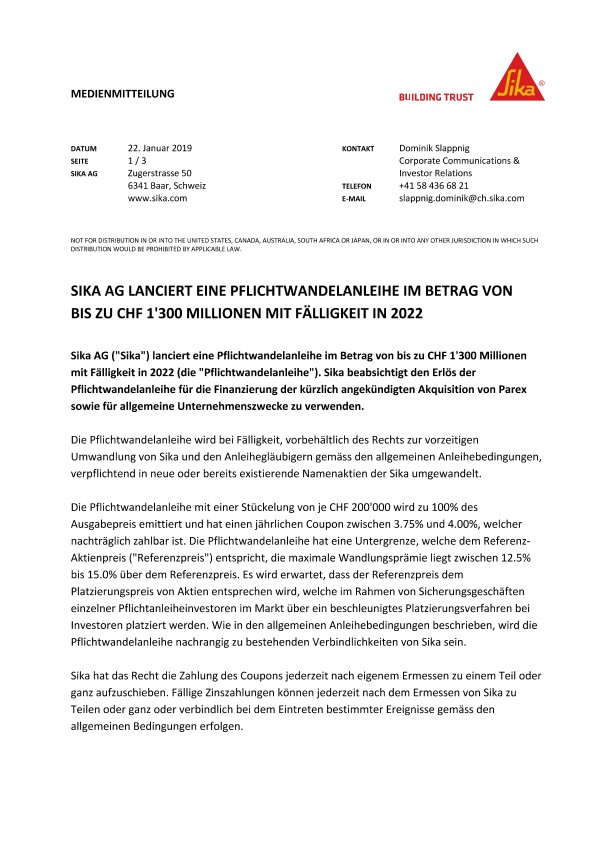