▪ Sales growth of 13.7% in local currencies to CHF 7.09 billion in 2018
▪ Strong growth in all regions
▪ Continued investment in supply chain expansion with opening of 11 factories, 1 national subsidiary, and 4 acquisitions
▪ Outlook 2019: in line with the strategic targets, sales growth of 6-8% and over-proportional profit increase are expected

Sika proved its ability to generate very strong growth in 2018, increasing sales in local currencies by 13.7% to the equivalent of CHF 7.09 billion. The positive development of business in all regions, together with continued investments in new factories, the establishment of another national subsidiary, and the strategic focus on big cities to capture the business potential of the megatrend urbanization contributed to Sika’s strong growth.

Over the last year, Sika succeeded in increasing sales by 13.7% in local currencies to a total of CHF 7.09 billion, thereby exceeding the CHF 7 billion mark for the first time. All regions managed to boost sales and gain further market share. Above-average growth rates were achieved in Eastern Europe, Africa, the Middle East, USA, Indonesia, India, China, and in the Global Business segment.

"We made further significant progress with our growth strategy in fiscal year 2018 and have made good use of the additional momentum afforded to us by the settlement of the takeover dispute. Our 13.7% increase in sales meant we broke through the CHF 7 billion barrier for the first time. With 11 new factories, an additional national subsidiary and four acquisitions, we have invested a great deal in our supply chain in the past year so that we can benefit from the growth in global construction markets and further expand our market position. We owe this record result to the great efforts of the 19,500 people who work for Sika worldwide – and for that I would like to thank them." Paul Schuler, CEO of Sika

With the acquisition of Index Construction Systems and Products in Italy, Sika gained a leading manufacturer of waterproofing systems for roofs and building structures. In the reporting period Sika also acquired Polypag, a Swiss-based manufacturer and developer of polyurethane foam systems, as well as Arcon Membrane, a major manufacturer of roofing and waterproofing systems in Romania. New factories for concrete admixtures and mortar products were commissioned in Senegal, Saudi Arabia, Dubai, Azerbaijan, Kazachstan, and Russia.

The newly established Americas region recorded local currency growth of 11.7% in 2018 (previous year: 12.6%). Including acquisitions, USA managed to record double-digit growth thanks to investments and market initiatives in metropolitan areas. The development of business in Brazil and Colombia was above-average. The basis for further growth in Central America was laid with the establishment of a new national subsidiary in Honduras. With the acquisition of the global Concrete Fibers business from Propex Holding, LLC, Sika has further invested in the high growth market for concrete fibers. New production plants for concrete admixtures and mortars were opened in Peru and Guatemala.

Growth in the Asia/Pacific region amounted to 5.5% in local currencies (previous year: 5.4%). Here the highest growth rates were recorded by India, Indonesia, and China. In Vietnam, a state-of-the-art facility for mortar production has come on stream in the Bac Ninh plant alongside the existing production of concrete admixtures. This has enabled Sika to expand its supply chain in this large construction market.

The new Global Business segment recorded a growth rate of 29.2% in local currencies (previous year: 11.5%), of which 23.0% is attributable to the acquisition of Faist ChemTec. This new segment includes the globally managed businesses automotive, Advanced Resins (formerly Axson Technologies), and Faist ChemTec. Advanced Resins and Faist ChemTec are established providers of components and solutions for automotive and other industries. A new automotive factory for the production of acoustic and body reinforcement systems was opened in Querétaro, in order to derive even greater benefit from the strong Mexican automotive market.

For the business year 2018, a record operating profit (EBIT) in the range of CHF 940 million to 960 million is expected. With investments in eleven new factories, one additional national subsidiary, and four acquisitions, the basis for continued growth has been established. These 16 key investments, together with the well-filled pipeline of new products and the strong sales organization, allow Sika to look to the future with much confidence.

In the business year 2019, Sika expects a sales increase in line with its Growth Strategy 2020 targets of 6 to 8% and an over-proportional rise in profits. Depending on the closing date of the Parex transaction, sales are expected to exceed CHF 8 billion. The execution of the Growth Strategy will continue in 2019 with the opening of new factories and further acquisitions. The  new Strategy 2023 will be communicated at the Capital Markets Day on October 3, 2019. 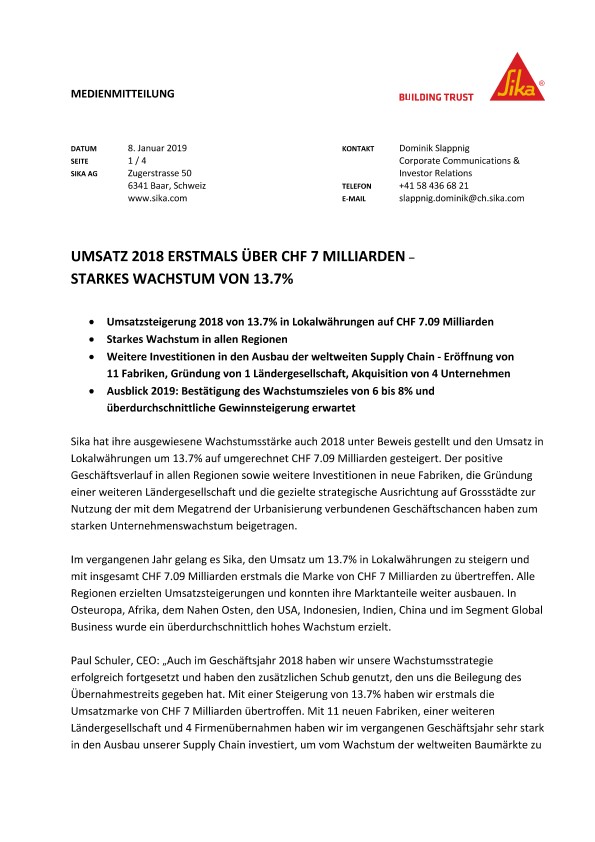