Sika once again delivered record results in 2019. Sales in Swiss francs rose by 14.4% year-on-year to CHF 8,109 million, which equates to an increase of 16.3% in local currencies. Operating profit increased by 11.5% to CHF 1,055 million, thereby surpassing the billion-franc threshold for the first time. Net profit was recorded at CHF 759 million, representing a year-on-year growth of 10.4%. Operating free cash flow doubled versus the previous year, amounting to CHF 1,026 million.

"With strong growth of 16.3% and sales reaching CHF 8.11 billion, we surpassed our CHF 8 billion sales target for fiscal 2019. In a challenging market environment, we achieved record results in operating profit, profit, and cash flow, and we are convinced that we will be able to sustain our positive growth momentum over the coming years. With our new Strategy 2023, we are moving the performance of our organization to the next level. The business potential opening up for Sika places us in an outstanding position for sustainable and profitable growth. I would like to thank our worldwide workforce of over 25,000 people for their tremendous dedication and for the unique way they identify with our organization." Paul Schuler, CEO of Sika

Sika can look back on a highly successful 2019. It was a year in which numerous projects were realized to set the course for an even stronger performance, in particular the acquisition of Parex, the largest in Sika’s history. With sales of CHF 1.2 billion on an annualized basis and more than 4,500 employees, this takeover makes a significant contribution in bringing Sika to the next level of growth.

The new 2023 growth strategy was launched and publicly unveiled in October 2019. The strategic targets include annual growth in local currencies of 6–8% and an increased EBIT margin target of 15–18%, which is to be achieved from 2021 onward. In addition to these ambitious financial targets, the most important elements of the company’s new strategic direction include the introduction of an eighth Target Market, “Building Finishing”, a focus on operational efficiency, and the targeted orientation of the Group toward sustainability.

In 2019, Sika launched around 100 important new products and confirmed its innovation leadership. For example, new, sustainable solutions with improved performance have been developed in the areas of low-emission epoxy resin floor coatings and hemp-based, cement-free mortars. Sika has also been making progress with new concepts for future building, such as modular construction and 3-D concrete printing. At the end of 2019, Sika won the Swiss Technology Award in the “Innovation Leaders” category for a ground-breaking new adhesive technology. SikaForce® Powerflex, which combines the properties of elastic and high-strength structural adhesives in a single product, enables manufacturers of cars, rail vehicles, buses, and trucks to implement new, lighter, more ecological vehicle concepts while maintaining body stiffness, good elasticity – and thus ideal mechanical properties.

Growth in All Regions

In a challenging market environment, Sika has grown more strongly than the market in all regions.

The EMEA region (Europe, Middle East, Africa) reported a sales increase in local currency of 11.6% in 2019, amounting to CHF 3,432 million. A strong development was seen with double-digit growth rates in Africa and high single-digit growth in Eastern Europe. In Belarus, Sika acquired Belineco, a specialist manufacturer of polyurethane foam systems. In Romania, the company agreed to acquire Adeplast, a leading manufacturer of mortar products and thermal insulation solutions. This deal is expected to close in the first quarter of 2020. Production capacity was expanded in Egypt, Qatar, Serbia, Senegal, Cameroon, and Ethiopia, with new factories opened for concrete admixtures and mortars.

The Americas region continued to focus its business activities on the largest metropolitan areas and generated impressive sales growth in local currency of 19.2% in 2019, amounting to CHF 2,162 million. Growth momentum was particularly pronounced in North America. In Latin America, political tensions in countries such as Mexico, Chile, and Ecuador, are leaving their mark on local construction industries. Brazil, Colombia, and Peru all posted strong growth rates. In Canada, the acquisition of King Packaged Materials in the reporting period brought a market leader in concrete repair systems into the Group.

Growth in the Asia/Pacific region in local currency reached 35.1%, amounting to CHF 1,585 million. This figure includes a significant acquisition effect of 30.3%, in particular deriving from the Parex acquisition. The highest organic growth rates were recorded in China, India, and the Philippines. In China, Sika acquired Crevo-Hengxin, a manufacturer of silicon-based sealants and adhesives. The newly acquired range of products opens up cross-selling opportunities in the extended distribution channels. Furthermore, a new factory in the Bekasi district on the outskirts of Jakarta commenced operations in Indonesia in the reporting period. Sika now produces concrete admixtures and mortar products for the local construction market in three factories.

The Global Business segment recorded a growth rate in local currency of 3.0% with sales amounting to CHF 930 million. Sika gained further market share in the Automotive area in 2019, despite the sharp decline in global production figures in this sector. The megatrends in modern automotive construction, which are dominated by electro-mobility and lightweight construction, are opening up new avenues with significant long-term growth potential for Sika, thanks to multi-material designs and new adhesive technologies, as well as heat management in modern battery technologies for electric vehicles.

With sales of CHF 8,109.2 million in 2019, Sika was able to surpass the sales mark of CHF 8 billion for the first time. This equates to growth of 14.4% in Swiss francs and 16.3% in local currencies. Organic growth reached 3.3% (previous year: 6.8%). The material margin recorded a year-on-year increase from 53.0% to 53.6%. Operating profit (EBIT) improved by 11.5% to CHF 1,055.1 million (previous year: CHF 945.9 million). The operating result includes one-time costs incurred in connection with the takeover of Parex. Excluding one-off and acquisition effects in 2019, EBIT would have recorded an over-proportional increase. The tax rate was brought down further and amounted to 21.5% in the year under review (previous year: 23.0%), which meant that net profit also set a new record of CHF 758.5 million, equivalent to a rise of 10.4%.

Higher Dividend to Be Proposed

In keeping with the double-digit increase in net profit and the strong development of operating free cash flow, the Board of Directors will be proposing a 12.2% increase in the gross dividend to CHF 2.30 at the Annual General Meeting of April 21, 2020.

Strategy 2023, which was unveiled in October, is designed to expand the company’s growth model and align the organization for continued long‐term success and profitable growth. By targeting six strategic pillars – market penetration, innovation, operational efficiency, acquisitions, strong corporate values, and sustainability – Sika is seeking to grow by 6‐8% a year in local currencies by 2023. It is aiming for a higher EBIT margin of 15‐18% from 2021 onward. Projects in the areas of operations, logistics, procurement and product formulation should result in an annual improvement in operating costs equivalent to 0.5% of sales.

The prerequisites for further dynamic growth have been put in place with the launch of the new 2023 growth strategy and investments in seven new factories and five acquisitions. Thanks to these twelve key investments, pronounced innovative strength, and a clear sales focus, Sika is in an outstanding position for the future.

For the 2020 financial year, due to the higher acquisition impact, Sika is expecting a sales increase of more than 10% in local currencies, as well as an over-proportional increase in profitability. The unknown impact of the coronavirus on the development of the end markets is an element of uncertainty. 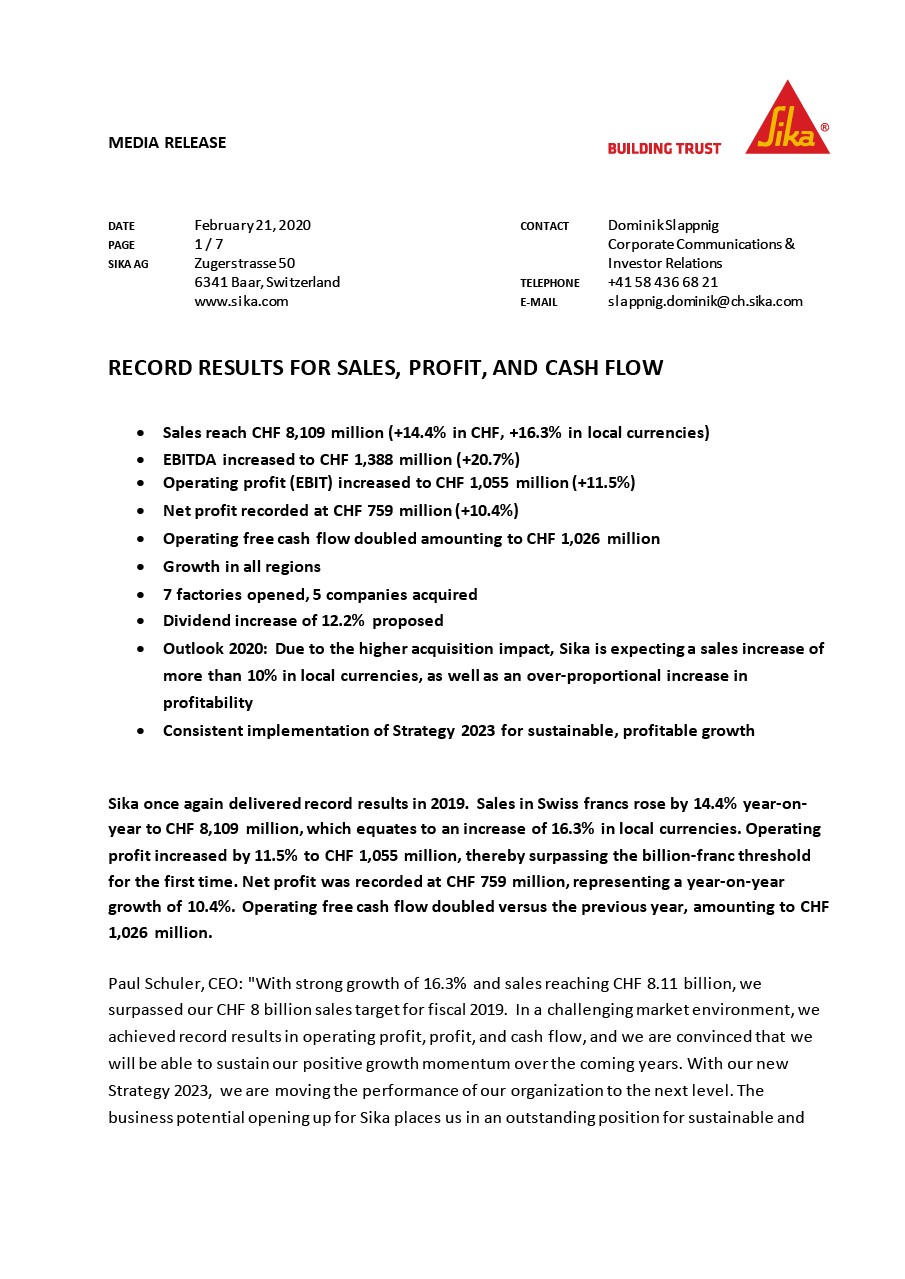 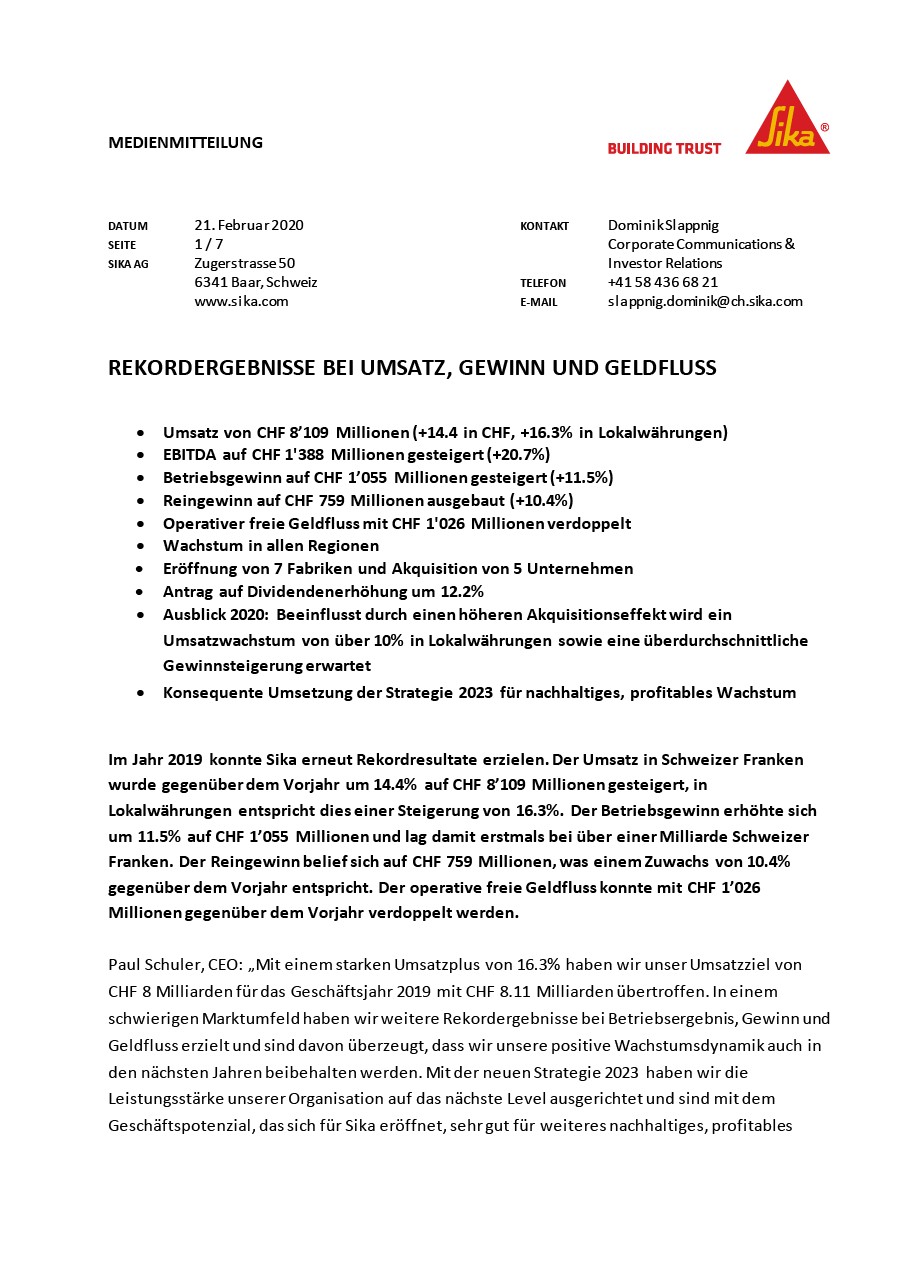 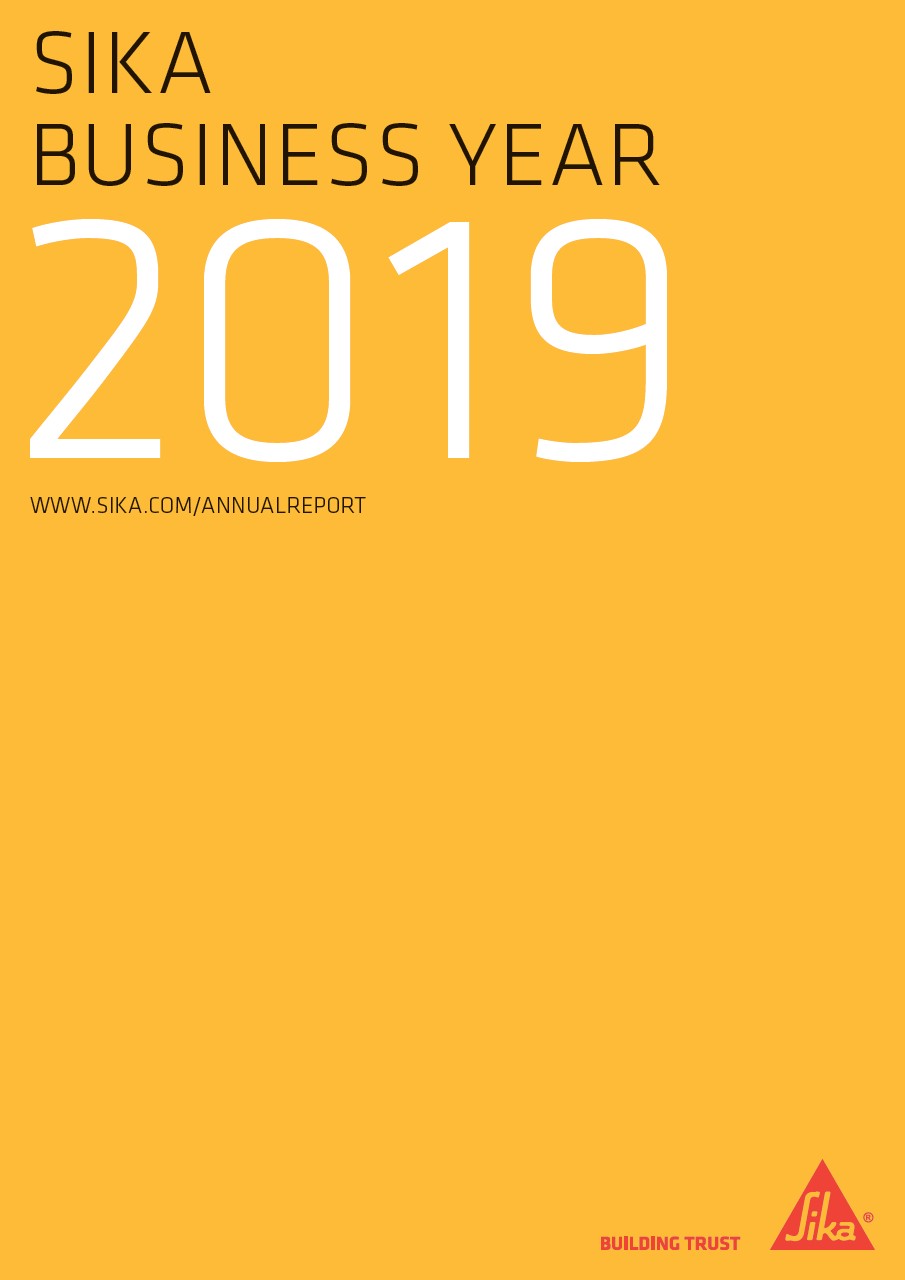 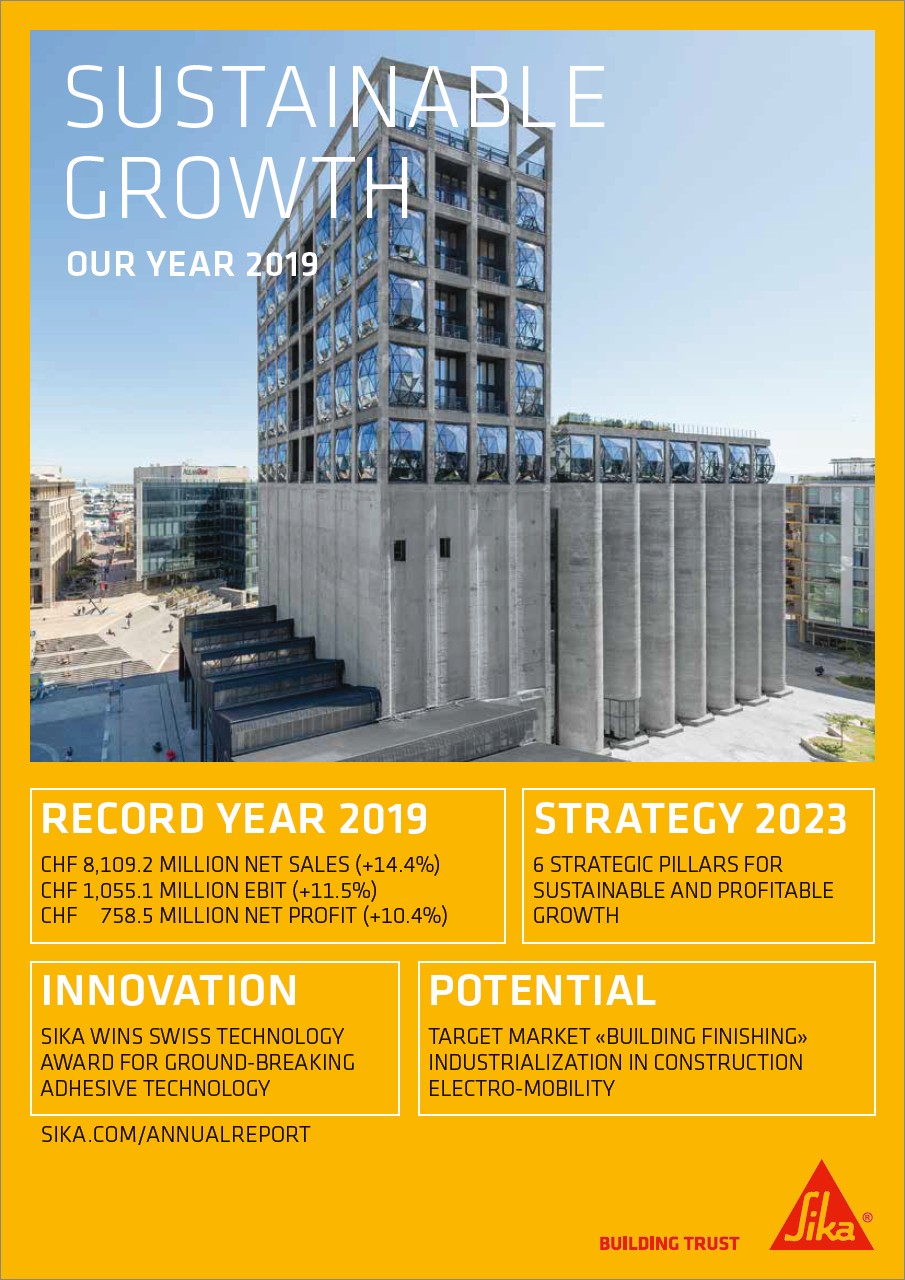 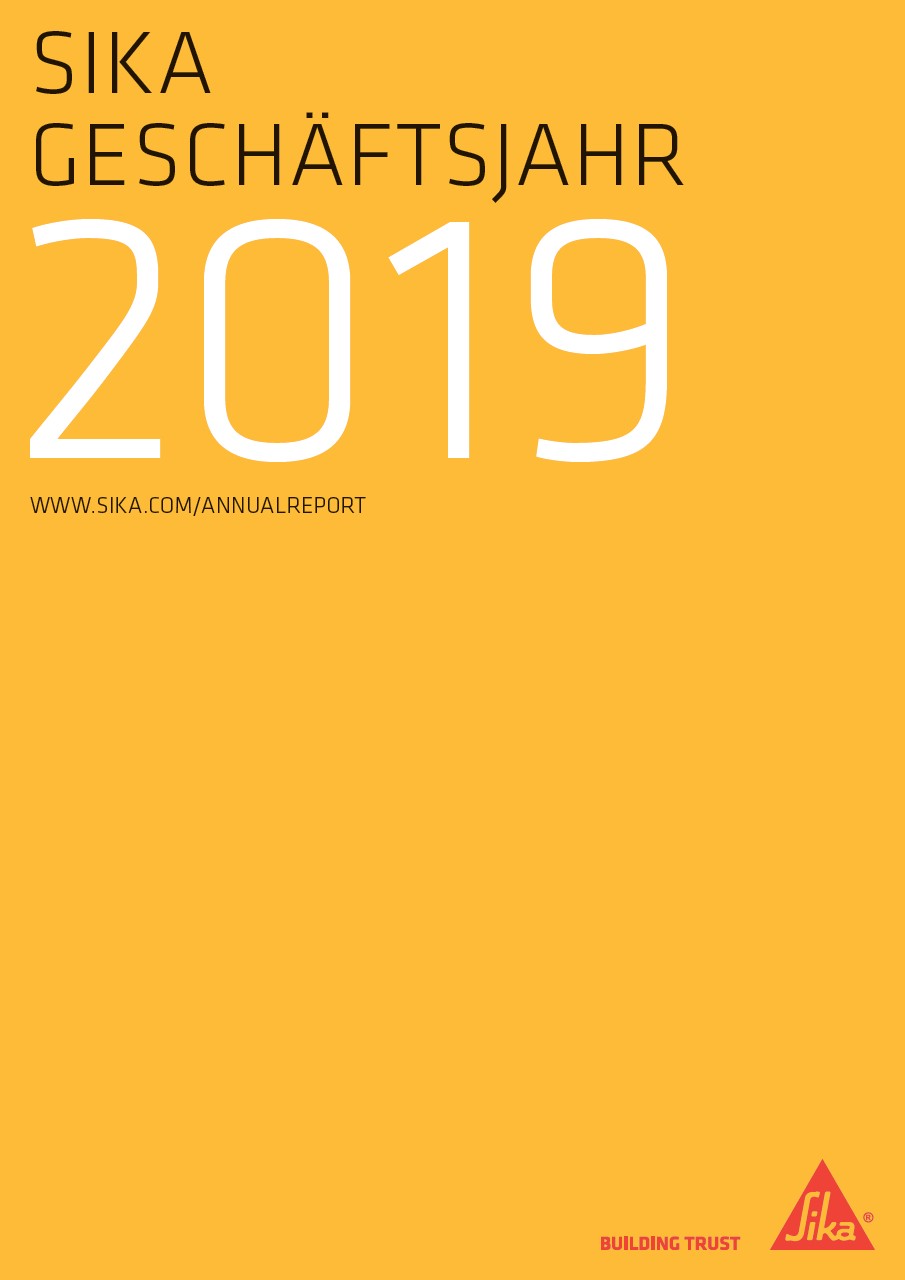 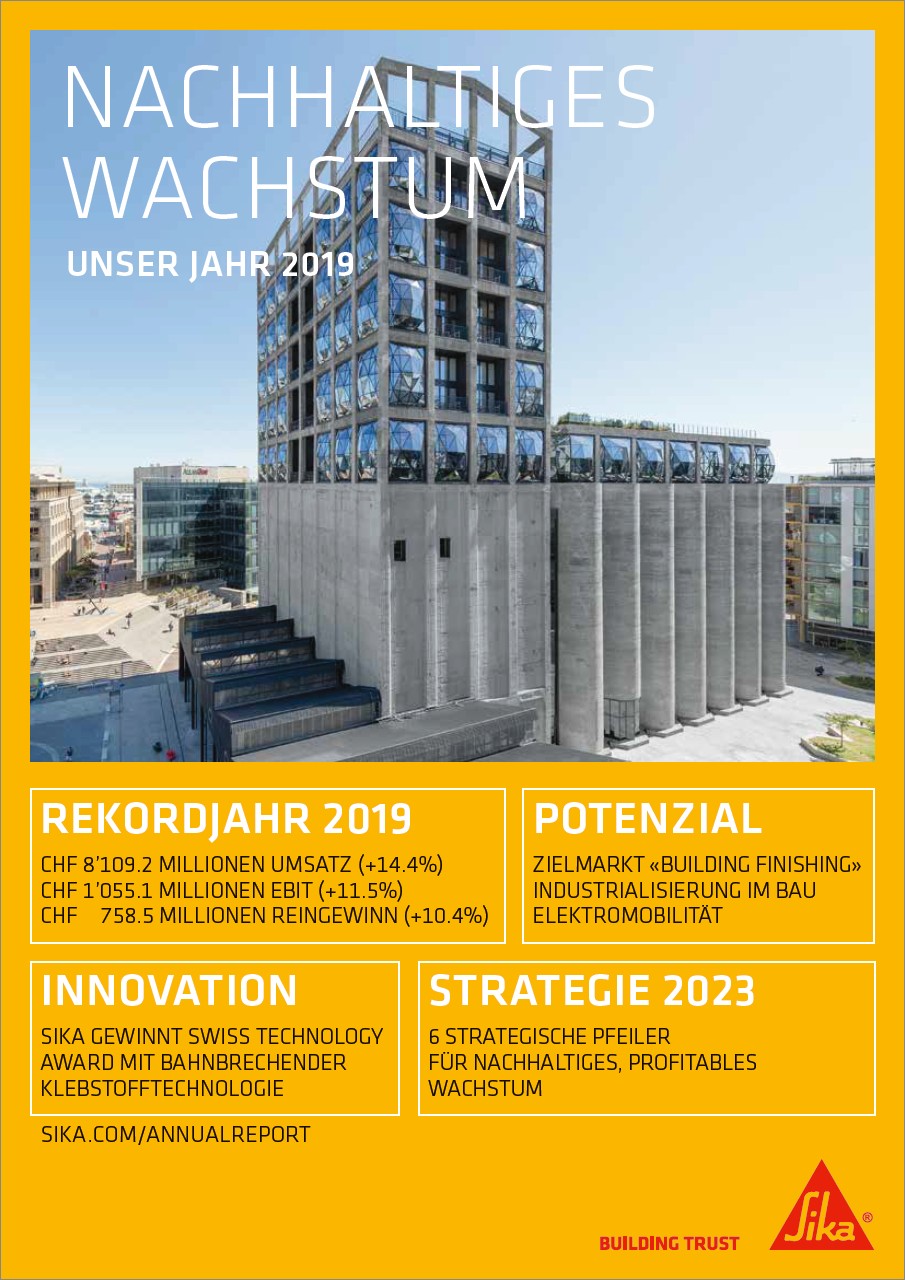