Sika posted a 6.6% increase in sales in the first half of 2011, achieving net sales of CHF 2 231.5 million. In local currencies, Sika lifted sales by 19.5%. The currency effect for the first half-year stood at -12.9%. Margins were squeezed by the rising raw material prices.

Margins were squeezed by the rising raw material costs. Although price rises have been implemented, these can only be passed on to the market after a certain time lag. Consequently, the gross result in rela­tion to sales dropped below the previous year’s level to 51.9%. At the level of operating profit before depreci­ation, the narrowing margins were partly offset by effi­ciency gains. The EBITDA margin now totals 10.8% (2010: 13.6%).

Expansion in all regions

Adjusted for exchange rates, Sika’s sales grew in all regions. The emerging countries continued to record positive trends, with significant growth rates in terms of local currencies: sales in the Asia/Pacific region increased by 52.2%, with new acquisitions accounting for 27.8%. Latin America continued to perform strongly, with sales up by 24.4%. At 10.2%, growth in IMEA (India, Middle East, Africa) was to some extent dampened by the po­litical unrest in North Africa and the Middle East.

The picture in the more mature markets was as follows: ex­panding market access in North America paved the way for a 25.4% rise, including an acquisition effect of 8.5%. Europe North grew by 14.8% as the region bene­fited heavily from the mild winter. The figures for Europe South eased gently upwards by 3.7% despite flagging markets.

The first half-year witnessed a brisk demand for both construction sector and industrial manufacturing prod­ucts. In terms of local currencies, sales to the construc­tion sector rose by 21.7%, with acquisitions accounting for 6.0%. For the sector industry, the growth in local currencies ran to 11.4%, including an acquisition effect of 0.2%.

The price situation for the key raw materials needed by Sika remains challenging. The uptrend in raw material prices witnessed in the second half of 2010 failed to level off in the first half-year and, in some cases, even gathered pace. At the same time, it was only possible to pass on higher material costs to the market with a certain time lag.

The difficult situation in Europe’s peripheral countries has worsened, thereby denting the performance of the relevant national organizations. Nor were the results helped by the political unrest in North Africa and the Middle East.

The sharp appreciation of the Swiss franc compared with the first half of 2010 has taken its toll. The ex­change rate shifts negatively impacted sales to the tune of -12.9%. This almost exclusively corresponds to translation effects. The Group’s decentralized organi­zation and the fact that procurement, manufacturing and sales take place in the same currency area, provide a good natural hedge against exchange rate movements.

Sika expects the positive trends in the emerging countries to continue into the second half – in contrast to the somewhat mixed picture predicted for the mature markets. Sika should still be able to exceed average market growth rates and win new mar­ket share. Sika assumes that raw material prices will remain high. However, given the price increases implemented, the pressure on margins should ease during the course of the year. 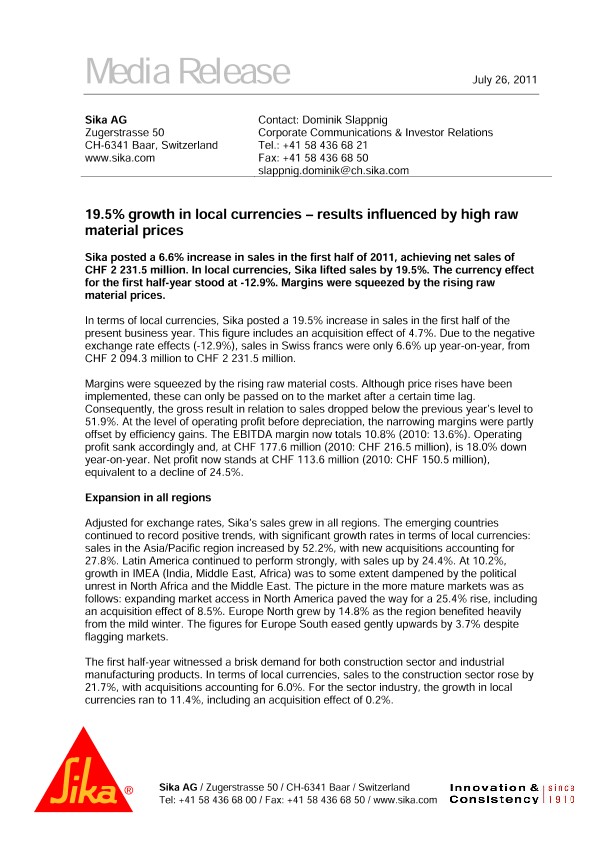 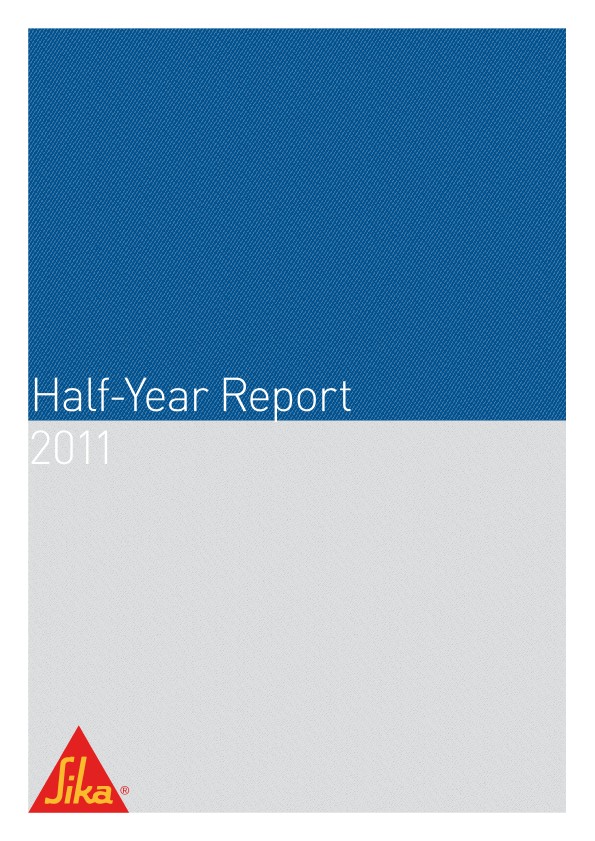