In the first nine months of the business year Sika expanded its market share and reduced operating costs. In addition the company benefited from lower raw material prices in comparison with those of the previous year period. The decline in sales in local currencies slowed to 5.2% (half-year -6.3%). Sales decreased by 11.6% in Swiss francs to CHF 3 132.6 million. The operating profit of CHF 321.8 million before restructuring costs lay 18% (half-year -40.8%) below that of the previous year.

Conditions in the company’s target markets did not change significantly during the period under review. Sika nevertheless succeeded in expanding its market share in some markets. The decline in sales has thus slowed somewhat, amounting to 5.2% in local currencies for the first nine months of the business year (half-year -6.3%).

Included is an acquisition effect of 2.3%. Exchange rate fluctuations had a negative effect of 6.4%, so that sales in Swiss francs decreased by 11.6% from CHF 3 543.1 million to CHF 3 132.6 million in comparison with the previous year period.

While Sika achieved double-digit growth rates in emerging countries such as China and Indonesia, sales decreased in OECD nations (Japan, Australia, New Zealand). Adjusted for exchange rates, sales of products for the construction industry declined by 2.1% during the first nine months of the business year, including an acquisition effect of 3.0%. The decrease in sales of products for industrial manufacturing (primarily in vehicle construction) amounted to 16.6%.

Sika benefited during this reporting period from significantly lower raw material prices in comparison with the previous year period. Gross profit in relation to net sales improved by 2.1 percentage points to 55.1%. Operating costs before restructuring declined all in all by 6.3% (adjusted for acquisitions by more than 9%).

In particular the reduction of other operating expenses by CHF 80 million added to this result. At CHF 321.8 million, the operating profit before extraordinary restructuring costs lay 18% (half-year -40.8%) below that of the previous year, yielding a margin of 10.3% (previous year 11.1%).

Restructuring costs in the amount of CHF 22.7 million impacted the income statement in the third quarter. Operating profit (EBIT) amounted to CHF 299.1 million, corresponding to a decline of 23.8% in comparison with the previous year period. The EBIT margin reached 9.5% (previous year 11.1%). Consolidated net profit totaled CHF 199.9 million, or 6.4% (previous year 7.3%) of sales.

Although the global economy overall appears to have reached the low point of the recession, the economic prospects for the construction industry and for large areas of industrial manufacturing remain unpredictable. Sika anticipates positive impulses in the area of infrastructure projects as a result of the economic stimulus programs introduced by many countries, whereby it remains open when these impulses will actually be felt. On the other hand the company perceives few signals for early recovery in the area of commercial construction, since in view of large excess capacity private investors have little incentive for new investments.

Residential construction will persist at a low level. Market development in the area of industrial manufacturing is in large part dependent on consumer purchasing. Rising unemployment figures and stagnating or declining consumption make it apparent that the situation is still unstable, and that confidence in an economically balanced future has not yet returned.

In its target markets Sika will continue to exploit existing market opportunities intensively and pursue its cost reduction efforts further. Therefore additional restructuring costs are anticipated in the fourth quarter. 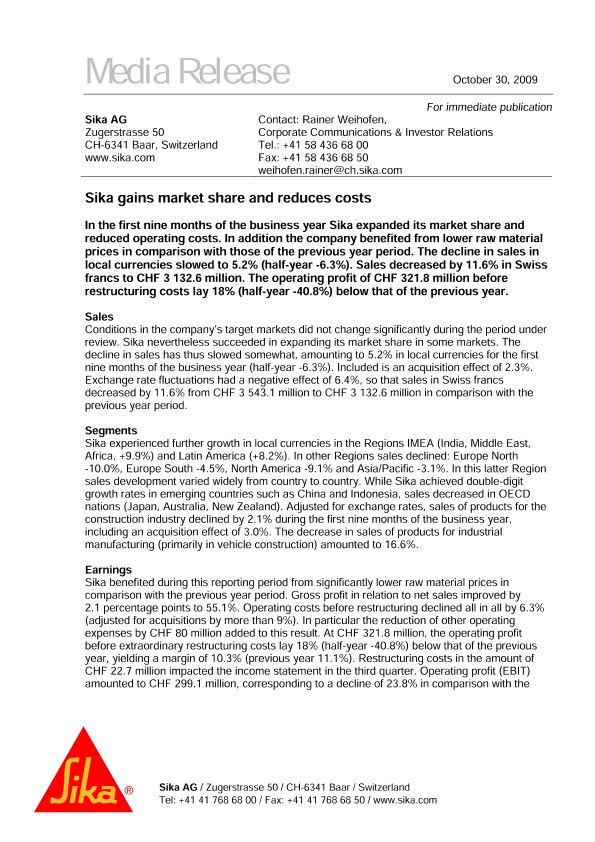 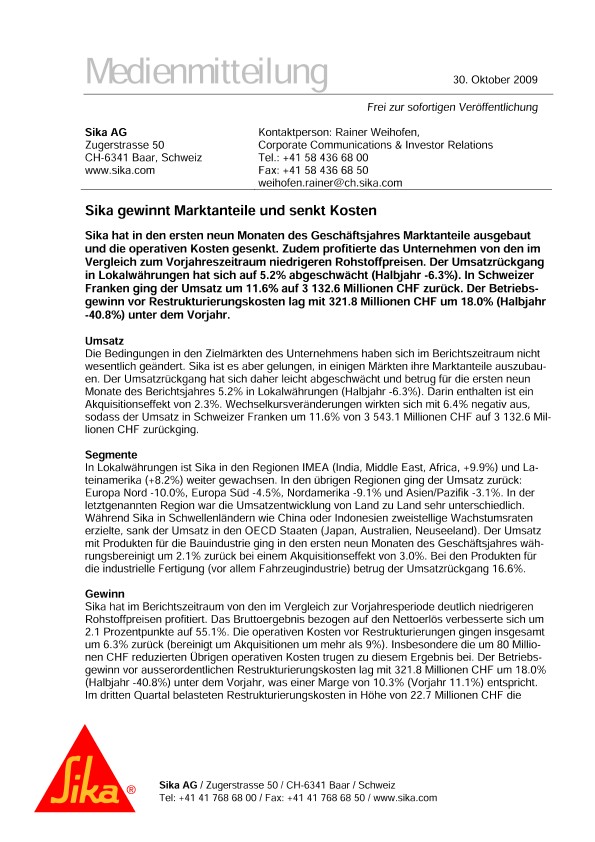