Continued Growth in a Difficult Environment

The Sika Group increased sales in 2008 by 7.3% in terms adjusted for exchange rates. In Swiss francs this yielded a net result of CHF 4.625 billion, 1.1% higher than that of the previous year. Operating profit before depreciation, EBITDA, amounted to CHF 556.1 million, and consolidated net profit to CHF 267.4 million. Overall Sika achieved the second highest result in the company’s history.

Despite the effects of the declining construction industry in various countries felt throughout the Group in the fourth quarter of the reporting year, growth in the Construction Division, adjusted for exchange rates, was satisfactory at 9.2%.

In the Industry Division on the contrary, the substantially collapsed production figures in vehicle construction in the fourth quarter limited sales growth to an exchange rate-adjusted 0.6%. All Regions contributed to Group growth. The best results were achieved as in the previous year in the Regions IMEA (India, Middle East, Africa; +33%) and Latin America (+25%).

Above all three factors influenced the result negatively:

Short-term forecasts in the present environment are very difficult. Due to the spreading economic crisis Sika reckons with a decline in demand in many of the markets that are relevant for the company. The Construction Division feels the cooling demand with some delay, and on the other hand will also profit later from an economic recovery. Economic stimulus packages announced in many countries will help in the infrastructure sector to compensate growth slumps in private commercial construction. It is nevertheless entirely open when these effects will be felt.

Sika will employ the current business year to increase the efficiency of production facilities, the global supply chain and the whole organization further. Production facilities that are not operating optimally will be decommissioned and local production capacity adapted to demand.

In accordance with the Group’s decentralized structure the regional companies will develop individual programs in order to profit from available growth opportunities and – where necessary – adjust cost structures quickly to respective market conditions. These programs could also affect jobs. In view of the corporate structure Sika does not consider comprehensive, worldwide plans for personnel reduction to be an adequate response.

Overall Sika considers its long-term growth chances intact. The growth course consistently pursued during the past years will orient itself during the recessionary phase towards reduced or negative growth with adapted costs. 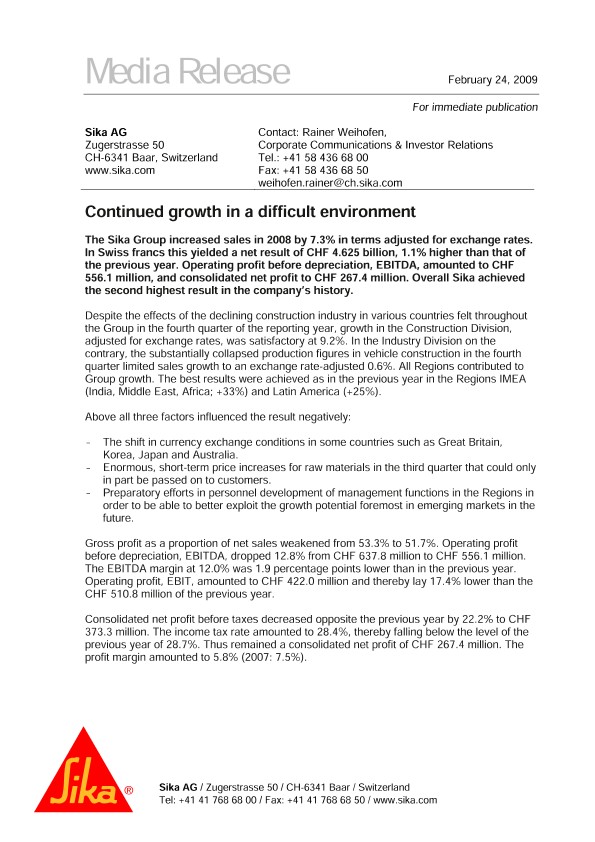 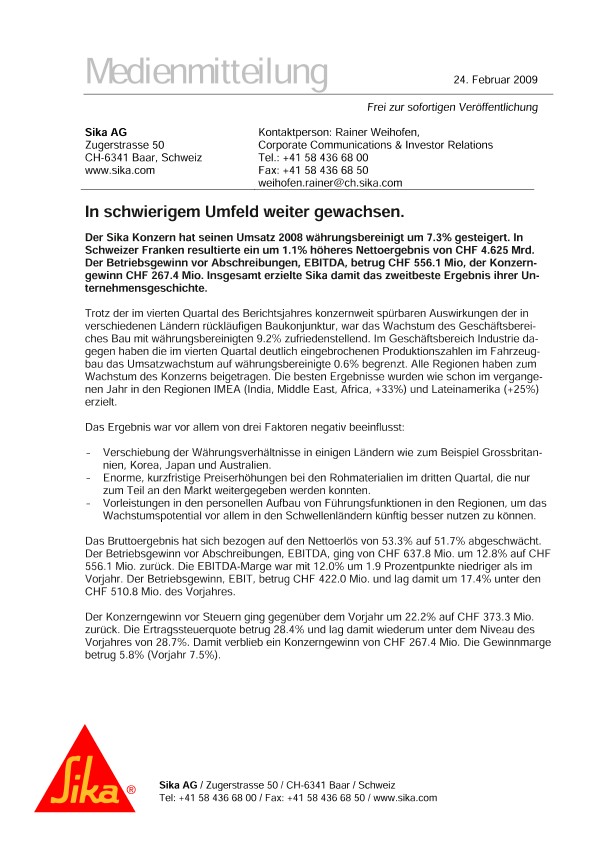