Despite mixed market performances, reticence on the part of public sector customers and rising raw material prices, Sika succeeded in lifting sales and net profit and is confident about 2011. The emerging markets in Latin America and Asia offer the greatest potential.

Owing to the significant increase in sales achieved in emerging markets, the proportion of Sika Group sales generated by these countries rose to 36%.

The strong franc was not without influence on the sales figures. The overall currency effect of -3.9% almost exclusively corresponds to a translation effect. The currency effect was particularly substantial in the final quarter of 2010. The Group’s decentralized regional structuring and the largely local-based generation of value added at Sika’s 120-plus locations in 74 countries provides a good natural hedge against exchange rate movements.

Raw material prices witnessed steep increases in 2010, owing primarily to low supplier capacity at the beginning of the year coinciding with increased demand. The fact that higher raw material prices could only be passed on to sales prices after a certain time lag squeezed the gross margin. Overall, Sika increased its gross profit to CHF 2.385 billion (2009: 2.295 billion), corresponding to a gross margin of 54.0%.

Sika’s unchanged investment strategy is geared to consolidating its global presence, built up during the last few years, and unlocking new markets or expanding its existing activities. To encourage focused growth, selected markets, customers, technologies and products are prioritized. Given the changed economic climate triggered in many parts of the world by the financial crisis, Sika has reviewed all investment plans and adjusted these to the new conditions. The volume of investment during the period under review therefore remained below the level of the previous years at CHF 100 million.

Proposals of the board of directors

The Board of Directors proposes to the Annual General Meeting payment of an unchanged gross dividend of CHF 45.00 per bearer share and CHF 7.50 per registered share. In addition, the Board proposes to reduce the nominal value of the bearer shares from CHF 9.00 to CHF 0.60 and that of the registered shares from CHF 1.50 to CHF 0.10. The payout sum amounts to CHF 134.0 million, representing approximately 43% (2009: 50%) of consolidated net profit. The proposal is an expression of the consistency of Sika’s dividend payout policy.

Furthermore, the Annual General Meeting is recommended to reelect current Board member Urs F. Burkard and to newly elect Monika Ribar, CEO of Panalpina, to the Board of Directors.

The markets are likely to present a similarly mixed picture in terms of performance in 2011 as they did in 2010. Economists are predicting modest growth for Europe. Much hinges on how the real economy is impacted by the high sovereign debt levels in various European countries, austerity programs and the euro crisis.

The trend toward a moderate recovery should continue in North America. There is a backlog of demand from the infrastructure sector in particular. Unlike Europe and North America the emerging markets continue to witness strong growth. The Asian markets will gain further in significance; the potential for structural growth has not been exhausted by a long way yet.

Renovation work will become an increasingly important factor in the construction sector – in particular in the roofing and waterproofing sectors. Investments in commercial buildings will probably persist at a low level, whereas investments in infrastructure are more likely to increase.

The market recovered surprisingly fast in the industrial sector in 2010 – especially in the motor vehicle segment. Further growth is expected for 2011 as well, albeit at a lower level owing to the higher baseline for comparison. The order books are full, and Sika has won market share with new products.

Sika will continue to consistently pursue its acquisition strategy in 2011, focusing on expanding market access and buying new technologies which fit in well with the existing portfolio and can be globally marketed via Sika’s network.

Sika’s medium-term growth targets envision an 8 to 10% increase in sales per year, with an EBITDA margin in the order of 12 to 14%. Sika seeks to win further market share in its key sales markets, to attain a 20% share in all Regions and target markets in the longer term and to achieve an annual turnover totaling CHF 8 billion in the medium term. 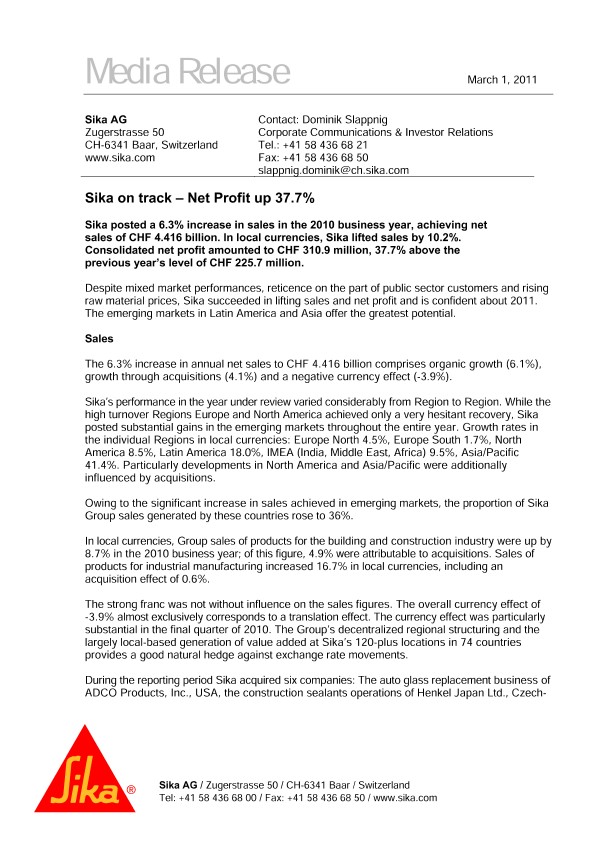 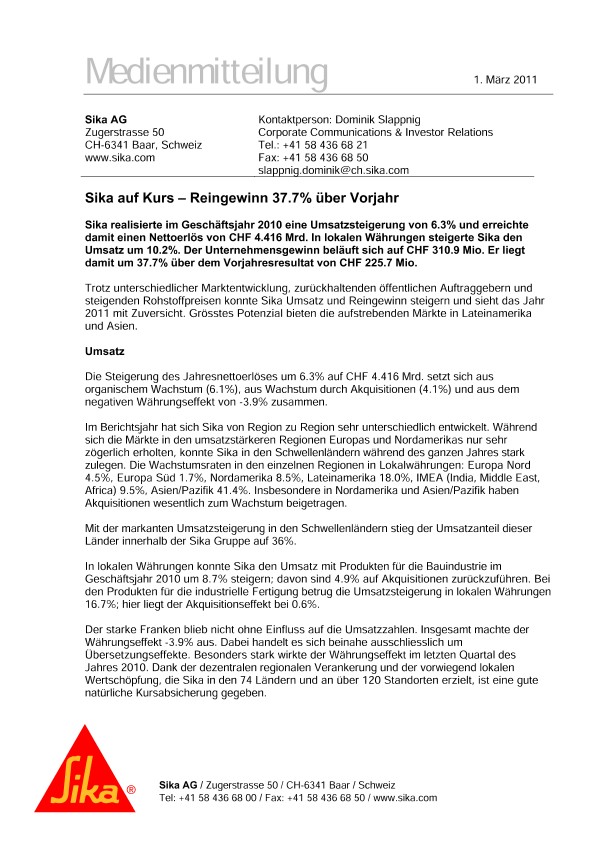 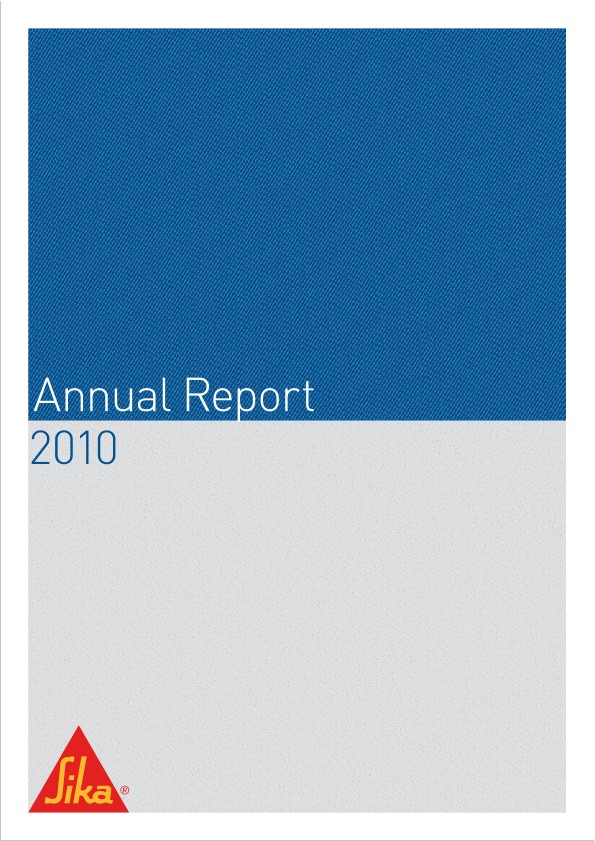 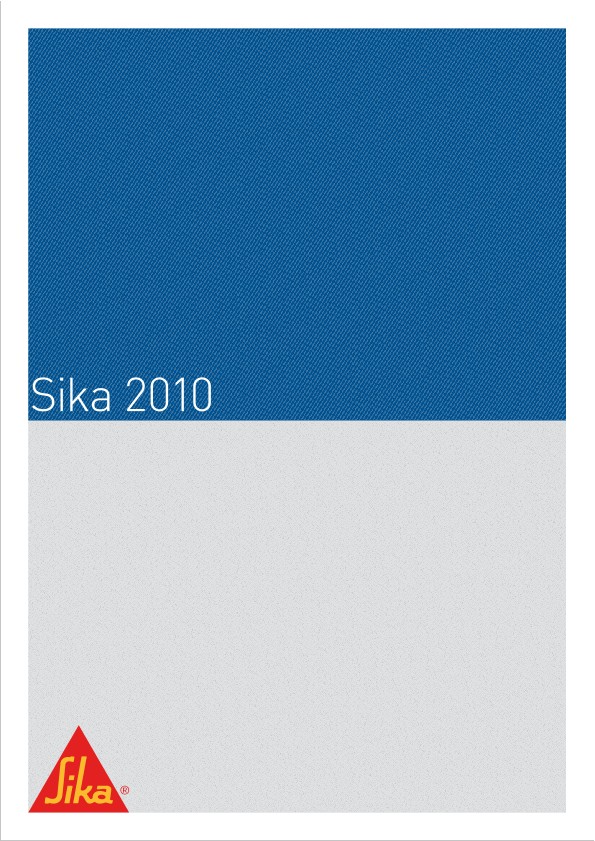