In the 2011 business year, Sika increased sales by 15.5% in local currencies. Owing to the huge rise in prices of raw materials, gross profit declined to CHF 2 304.6 million (previous year: CHF 2 384.9 million), which corresponds to a gross margin of 50.6%. Operating profit fell to CHF 347.1 million (previous year: CHF 439.2 million). Sika is confident that in the 2012 business year it will generate continued growth and improve margins.

Sika expanded in all regions and witnessed strong growth in the emerging markets of Asia/Pacific and Latin America. Sika also increased sales in the Region North America, gaining additional share in a fiercely competitive market. Europe North reported double-digit growth due to a mild winter and strong sales in Germany, Poland and Russia, while Europe South was able to maintain growth in the single-digit range on the back of the markets in France and Great Britain.

Growth in North America and Asia/Pacific was significantly boosted by acquisitions, which accounted for 5.1% and 14.0% respectively.

In 2011 Sika acquired eight firms. Together these companies generated annual sales of about CHF 233.6 million in 2011. Sika usually targets companies for acquisition which provide it with better market access or which possess technologies that are easy to market through Sika’s global sales network.

2011 alone the impact of exchange rate developments in the Swiss franc cost Sika around CHF 545 million in sales (- 12.3%). This corresponds almost exclusively to conversion effects. The Groups decentralized organization and the fact that as a rule purchasing, production, and sales occur in the same currency area provide a natural exchange rate hedge.

2011 material prices rose once again. As these can be passed on through sales prices only with a time lag, gross margins remained under pressure. Thus, gross profit declined to CHF 2 304.6 million (previous year: CHF 2 384.9 million), which corresponds to a gross margin of 50.6% (previous year: 54.0%).

Accordingly, operating profit fell to CHF 347.1 million (previous year: CHF 439.2 million), which resulted in an operating profit margin of 7.6% (previous year: 9.9%). Further efficiency improvements had a favorable effect of 0.8 percentage points on the items personnel expenses and other operating expenses, which partially mitigated the impact of high raw material prices.

At CHF 214.8 million, net profit was down 30.8% on the previous year (CHF 310.6 million). Furthermore, exchange rate effects had a negative impact of about CHF 35 million owing to the fact that headquarter costs are incurred in Switzerland.

Primarily due to foreign exchange effects, net working capital as percentage of net sales increased from 18.2% (previous year) to 19.9%. Operating free cash flow of CHF 186.1 million in the year under review (previous year: CHF 332.2 million) coupled with higher acquisition activity resulted in lower cash and cash equivalents of CHF 536.0 million as of the end of the year (previous year: CHF 938.4 million).

As a consequence, net debt rose to CHF 338.7 million, whereby a bond to the amount of CHF 275 million was repaid at the end of October and, in view of Sika’s solid cash position, was not renewed.

PROPOSALS OF THE BOARD OF DIRECTORS

The Board of Directors proposes to the Annual General Meeting payment of an unchanged gross dividend of CHF 45.00 per bearer share and CHF 7.50 per registered share.

Furthermore, it is recommended to the Annual General Meeting to re-elect current Board members Paul Hälg, Daniel J. Sauter, and Ulrich W. Suter and to newly elect Frits van Dijk, former Executive Vice President and Member of Executive Board of Nestlé responsible for Asia, Oceania, Africa and Middle East. Thanks to his experience in business with emerging markets, in the rollout of new products and in the management of a major conglomerate, Dutch national Frits van Dijk (born 1947) is ideally equipped for his future role on Sika’s Board of Directors. Fritz Studer is not standing for re-election.

As previously announced, after the Annual General Meeting in April Walter Grüebler will be stepping down after about 15 years of service to the Sika Group. His successor, Paul Hälg, unites in his person the necessary specialized market and technological knowledge and experience.

Sika is cautiously optimistic about 2012. Developments in Europe are still overshadowed by uncertainty. Sika will counter this uncertainty with an enhanced focus on customers and, where necessary, strict cost controls. The economy in North America has stabilized at a low level; Sika forecasts renewed growth driven by infrastructure and refurbishment contracts. The emerging markets, with isolated exceptions, will continue to grow rapidly. In addition, the significance of the Asian markets continues to rise; their potential for structural growth has not been exhausted by a long way.

Toward the end of 2011 the upward trend in raw material prices started to tail off. Moreover, Sika’s price increases started to bear fruit in the second half of 2011. These two factors will positively impact the company’s operating profit margin in 2012. Sika will continue to consistently pursue its acquisition strategy in 2012 by focusing on expanding market access and acquiring special technologies which can be globally marketed through its network.

Sika affirms that its medium-term growth targets remain unchanged in 2012. These envisage an increase in sales in local currencies of between 8 and 10% annually with an EBITDA margin of between 12 and 14%. Sika seeks to gain market share in its key sales markets, with the longer-term goal of becoming the market leader in all target markets. 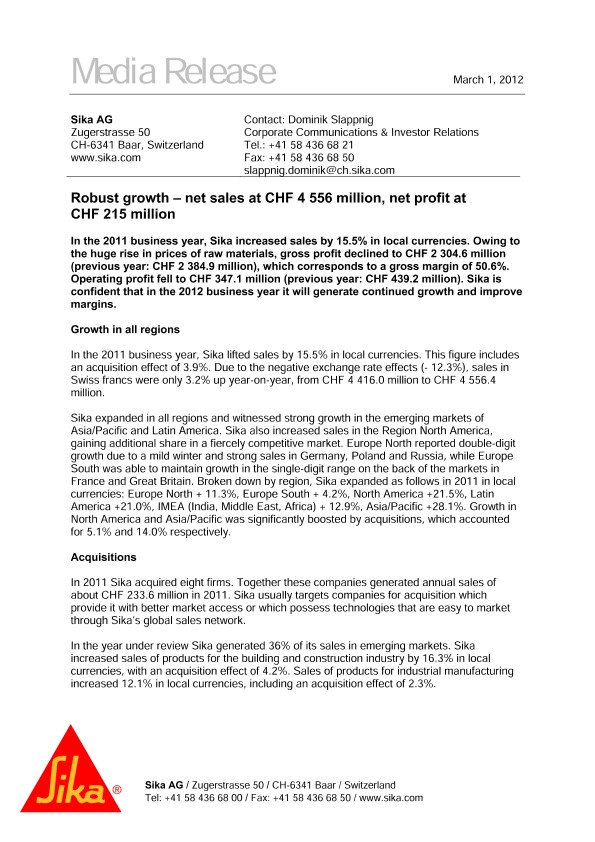 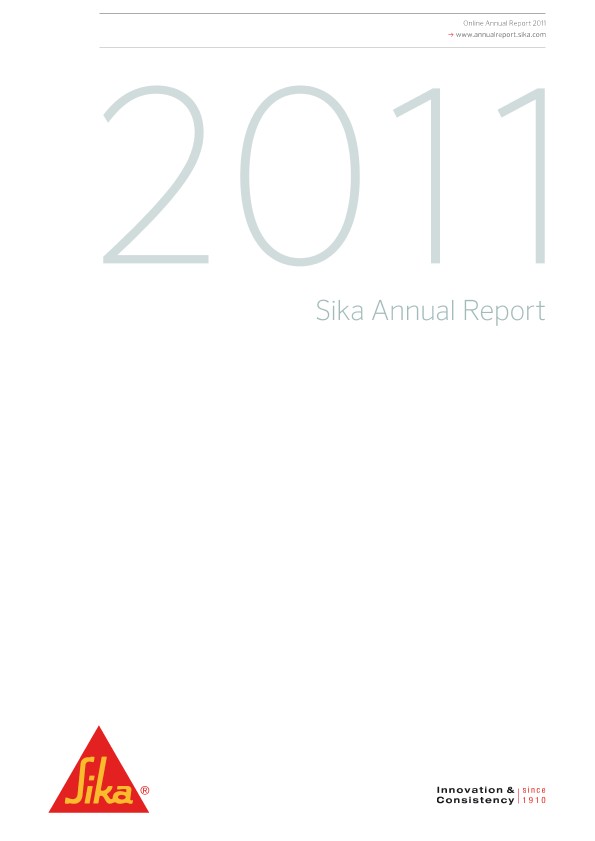 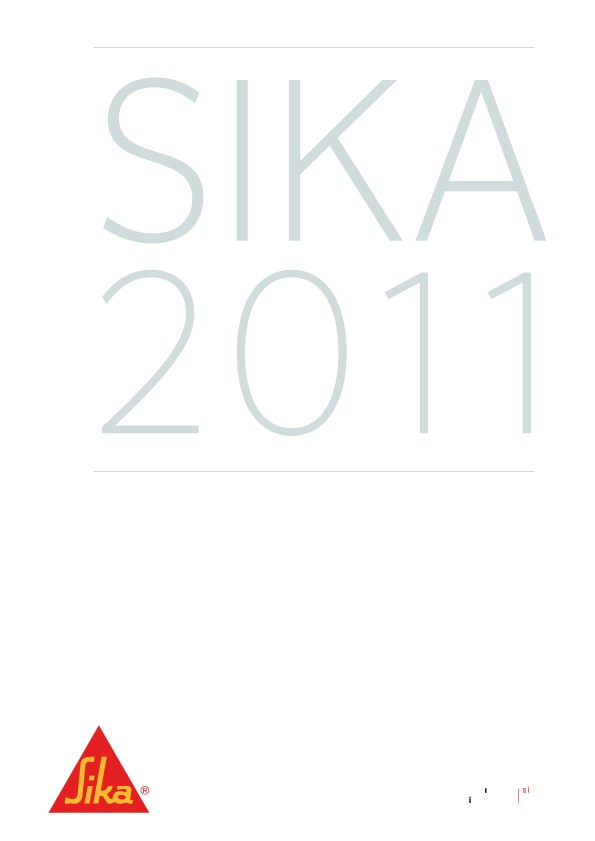