Growth by 24.7 Percent in Local Currencies in First Quarter

Sika increased sales by 14.3% in the first quarter of 2011, achieving net sales of CHF 1 021.2 million. In local currencies, Sika lifted sales by 24.7%. Sika benefited above all from the strong markets in Asia and Latin America and good results in the USA. The mild winter in 2011 compared to the previous year also had a positive impact.

In the first quarter of the current business year, Sika lifted sales by 24.7% in local currencies, including an acquisition effect of 6.6%. Factoring in the negative impact (-10.4%) of currency exchange movements, sales increased by 14.3% in Swiss francs to CHF 1 021.2 million compared to CHF 893.6 million in the first quarter of 2010.

As in the previous year, Sika also benefited in the first quarter from strong demand from the emerging countries. Reporting double-digit growth, North America made a significant contribution to the good result. Construction activity in the Regions Europe North and North America was stimulated by a somewhat mild winter compared to the previous year. The individual Regions achieved the following growth rates in local currencies: Europe North 22.8%, Europe South 8.6%, North America 29.5%, Latin America 26.0%, IMEA (India, Middle East, Africa) 9.4%, Asia/Pacific 61.8%. In North America and Asia acquisitions had a significant impact on growth.

The strong Swiss franc - compared to the first quarter of 2010 - was not without influence. Currency translation effects accounted almost exclusively for the negative impact of -10.4% which exchange rate movements had on sales. The Group’s decentralized regional structuring and the largely local-based generation of value added at Sika’s 120-plus locations in 74 countries provides a good natural hedge against exchange rate movements.

The situation regarding raw materials, a crucial factor for Sika, still poses a challenge. Having already gone up in the second half of 2010, raw materials continued to rise in the first three months of the present year at an even faster rate.

While the positive development seen in the emerging countries is likely to continue, the markets in Europe and North America still present a mixed picture. Even though recovery trends can be identified in individual countries, they do not point to a general development. As the Region IMEA shows, political turmoil can also have an impact on market development. Raw material prices continue to go up and will squeeze margins accordingly as higher material prices can only be passed on to the market after a certain time lag. Sika is sticking to its published medium-term growth targets.

Net Sales in the first three months of 2011 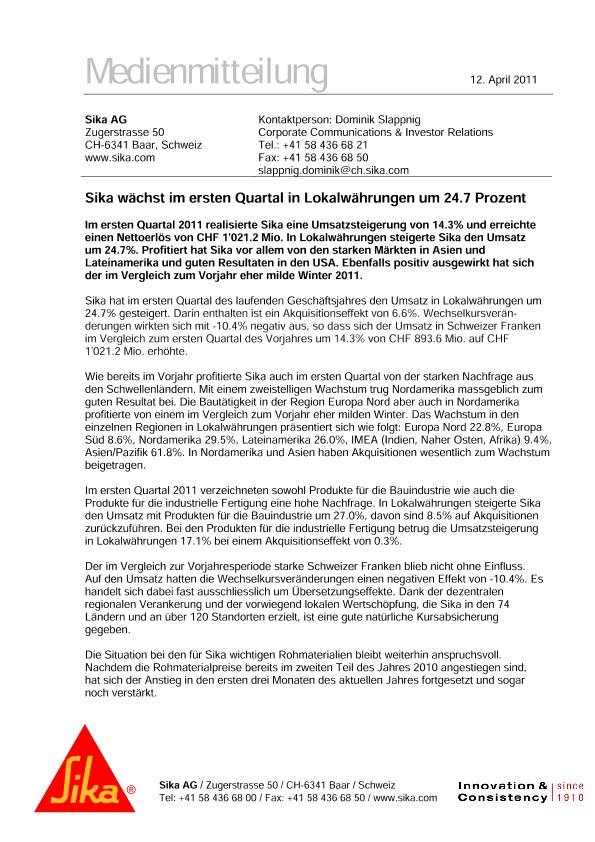