Latin America, Region IMEA (India, Middle East, Africa) and China continue to show solid growth figures, while USA, Europe and some Asian countries register slumps in volume as a result of the financial crisis and also due to currency effects. The drops in volume are notwithstanding lower than the sector average.

At -6% the currency effects remain strongly negative. Adjusted for acquisitions and currency influences, sales declined 9% in comparison with the prior year period. Country-specific cost reduction programs are demonstrating impact, even though with some delay. Sika anticipates further sustained growth for the second half-year in a number of emerging countries, but no general recovery of recessive markets.

In the first half-year of 2009, consolidated Group sales declined by 6.3% in local currencies. Included therein is an acquisition effect of 2.7%. Exchange rate fluctuations brought a negative impact of 6.0%, so that sales in Swiss francs in comparison with the first half-year of the prior year decreased by 12.3% from CHF 2 262.1 million to CHF 1 982.9 million.
Continuation of cost-reduction efforts

Adjusted for currency influences Sika grew further in the Regions IMEA (+9.2%) and Latin America (+9.6%). In the remaining Regions, sales development in local currencies was negative: Europe North -11.6%, Europe South -6.4%, North America -12.0% and Asia/Pacific -2.6%. In almost all countries Sika lies however above the general market development.

Sales of products for the construction industry declined 2.4% during the reporting period with adjustment for currency effects and including an acquisition effect of 3.5%. Among products for industrial manufacturing the decrease in sales amounted to 20.1%, as activities in automotive manufacturing (automobile, trucks and busses) have sputtered along at a very low level since the beginning of the year.

Material costs declined as anticipated during the reporting period. Negative currency effects and the revaluation of inventories undid this somewhat, such that gross profit improved by only 0.7 percentage points in relation to sales. Lower utilization above all of plants in central factories burdened the result. Personnel costs rose slightly, dropping somewhat however when adjusted for acquisitions.

Savings measures in personnel costs will first show impact in the second half-year. Other operating expenses could be reduced in the first half-year in accordance with reductions in volume. Overall the operating profit before depreciation EBITDA declined by 31.1% to CHF 214 million, yielding an EBITDA margin of 10.8%.

Operating profit registered at CHF 148.3 million and thereby lay 40.8% below the prior year. Operating free cash flow increased by CHF 72 million as a result of the reduced net working capital. Cash flows from investment and financing activities were influenced by&nbsp;the successful placement of a five-year bond issue in the Swiss capital market with an amount of CHF 300 million and a coupon of 3.5% per annum. The payment under subscription took place on June 4, 2009. The transaction serves the long-term, general financing of the company.

During the reporting period Sika acquired the English Iotech Group Limited with subsidiaries in Great Britain, USA and Belgium. Iotech is specialized in the formulation, production and distribution of polyurethane liquid membranes and precursor products. Liquid membranes are used worldwide in the market sectors roofing and waterproofing, with application here mainly for renovation and refurbishment of small and mid-sized roofs. The global market for these membranes is strongly fragmented; active are only local or regional suppliers. Growth rates lie above that of the building sector as a whole.

With the exception of Eastern Europe, Sika anticipates further growth in emerging countries in the course of the year, above all due to continually high demand in the area of infrastructure. In the mid-term sales in this segment should show additional positive development, since the economic stimulus programs agreed to by many countries will presumably display their first impact as of 2010. In contrast to this the company sees but few positive signals among commercial buildings for an early recovery. Sika rather anticipates a further decline in building activity, since many companies are postponing their investments.

Residential construction has endured a low ceiling of activity for some time now. Sales are increasingly shifting from new construction to renovation. Sika is well positioned here. Motor vehicle manufacturing will very likely remain in its current low gear. The segments railroad and mass transit busses form an exception, because here again economic stimulus packages could revive demand. Sika sees growth in the area of renewable energy production, in the construction of wind and solar power facilities.

Regarding raw material prices, Sika expects for the entire year some relief in comparison with the prior year, even if prices in the second half-year might increase slightly. Sika will continue its cost-reduction efforts unabated in the second half of the year.

In addition, during the phase of relatively low capacity utilization the company will update the process technology of its production network to the state of the art. Sika strives to maintain the necessary workforce of well qualified employees for a solution-oriented sales approach as far as possible, in order to exploit available market opportunities in our target markets also in periods of crisis. 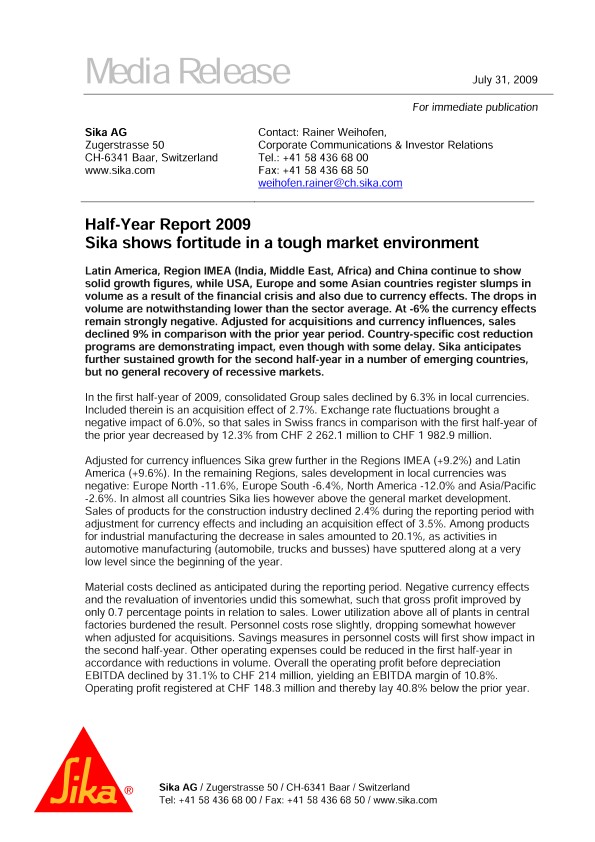 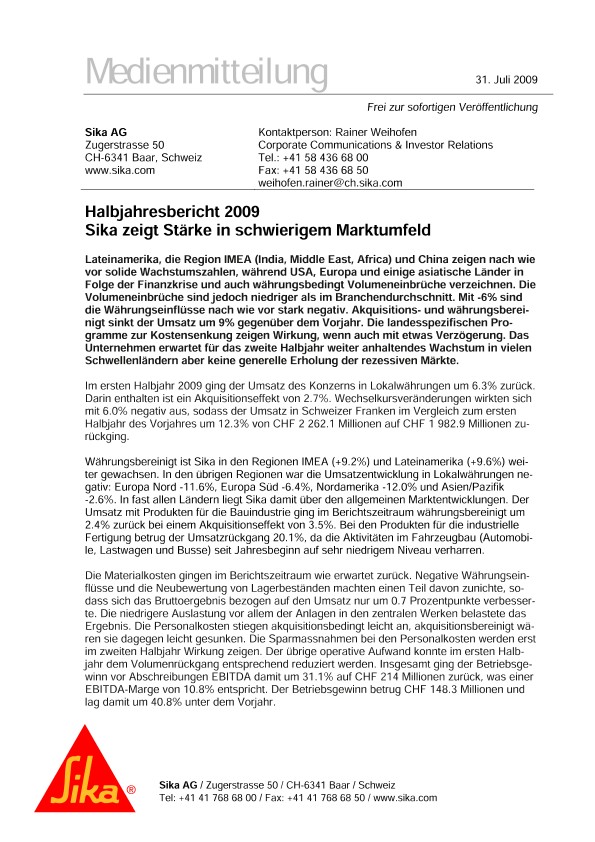