Sika grew in all Regions in the first half-year of 2010 in terms adjusted for exchange rates. In emerging markets, double-digit growth rates were achieved throughout. With material costs initially still low and those for personnel reduced, operating profit increased considerably. For the second half-year the company anticipates sustained growth with rising material costs.

In the first half-year of 2010, Group sales growth in local currency terms amounted to 6.7%. This includes an acquisition effect of 1.9%. Exchange rate fluctuations bore a negative effect of -1.1%, so that in comparison with the first half year of the year prior sales in Swiss francs grew by 5.6% from CHF 1982.9 million to CHF 2094.3 million.

In terms adjusted for exchange rates, Sika grew in all Regions, albeit with substantially varying rates.

Thus the emerging markets achieved double-digit growth throughout, with the highest rate in Region Asia/Pacific at 23.8%. Within this Region, China excelled with a growth rate of some 40%. In Region Latin America sales rose by 15.4%, followed by IMEA (India, Middle East, Africa) with growth of 12.8%. In the traditionally industrial nations growth rates proved lower: North America 5.6%, Europe North 2.2% and Europe South 1.3%. Sika thereby continued to gain market share.

In the first quarter of this year, lingering snowy winters in Europe and North America strongly hindered building activity, substantially impacting sales of products for outdoor applications. Conditions normalized in the second quarter, and overall sales of products for the building industry rose by over 7%. For the entire reporting period sales growth in terms adjusted for exchange rates amounted to 3.5%, including an acquisition effect of 2.2%.

Sales of products for industrial manufacturing accelerated by 20.1% (0.5% due to acquisitions). Contributing to this success were both the considerable number of new vehicle models that Sika won in years 2008 and 2009 and which are now leaving manufacturers’ assembly lines, as well as the substantially boosted production figures for automobiles, busses and also commercial vehicles, in comparison with the same period in the previous year.

During the reporting period the effective material costs remained at the reduced level of the second half-year of 2009, so that as a proportion of sales gross profit improved by 0.9 percentage points.

As a result of cost reduction programs, personnel costs declined as a proportion of sales from 24.4% to 22.6%. Other operating expenses developed in accordance with sales volume. Operating profit before depreciation, EBITDA, improved by 32.8% to CHF 284.2 million, yielding an EBITDA margin of 13.6%. Operating profit amounted to CHF 216.5 million, so lying 46.0% above the reporting period of the previous year.

In the period under review Sika rigorously pursued its acquisition strategy, taking over various companies or parts thereof, among others the automotive glass replacement business of ADCO Ltd., USA, Henkel Japan Ltd.’s building sealants business, and Panbex of the Czech Republic.

By assuming a majority position in the Japanese Dyflex HD Co., Ltd., which with well established brands and distribution channels is market leader in Japan for waterproofing of structures, Sika substantially improved its market position in Japan. Dyflex’s products and technologies complement Sika’s offerings, and the merger of product portfolios enables Sika to provide customers in Japan and the entire Region Asia/Pacific with a full palette of waterproofing systems and solutions. With this acquisition Sika tripled its sales in Japan.

Sika anticipates continued growth for the second half-year, above all in emerging markets. Even if general economic growth should slacken in individual emerging countries, possibilities for growth through greater market penetration remain unrestricted. The mild recovery in North America should continue. Cyclical development in Europe stands entirely open: the effects of governmental debt policy and respectively of the subsequent national remediation measures are not yet foreseeable.

For a number of countries an outlook at present is hardly possible. Raw material prices have risen in recent months and will impact material costs in the second half-year. Whenever possible Sika will transfer this cost increase to sales prices. 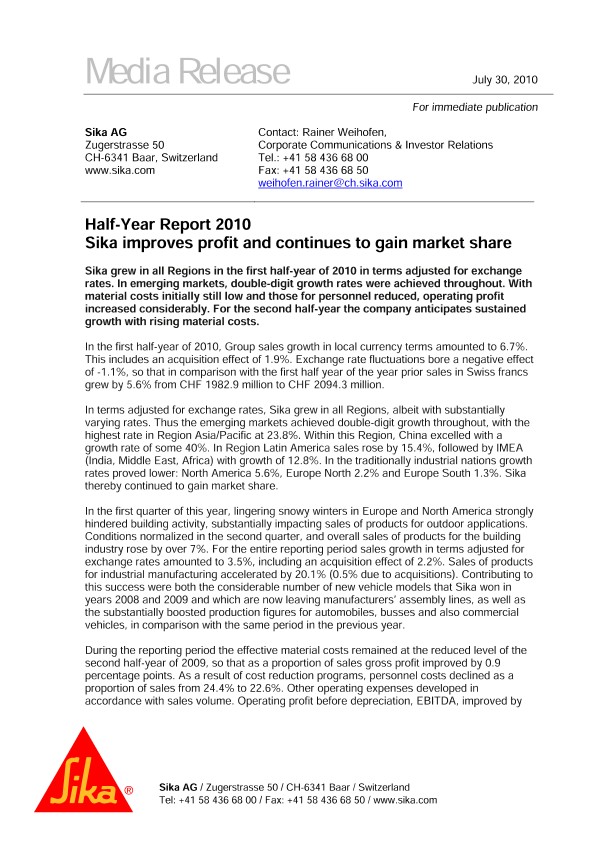 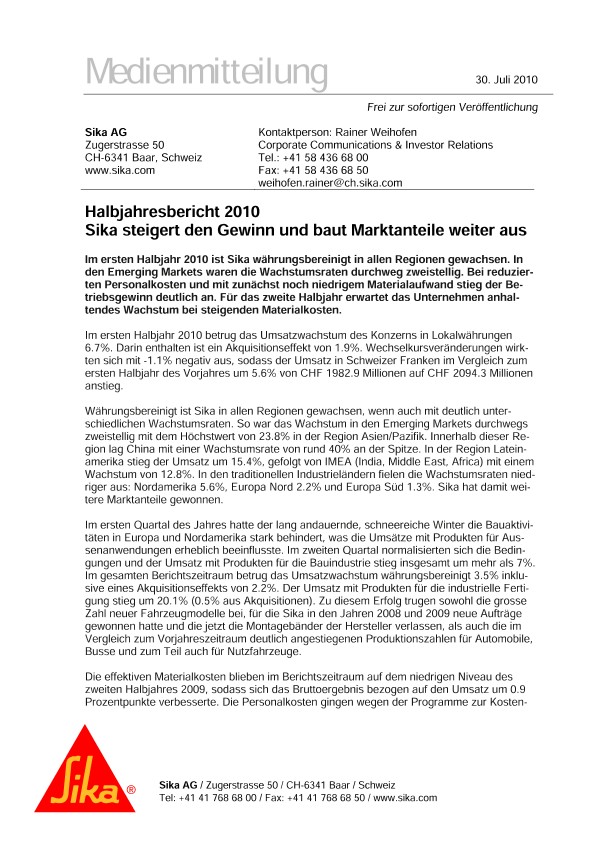 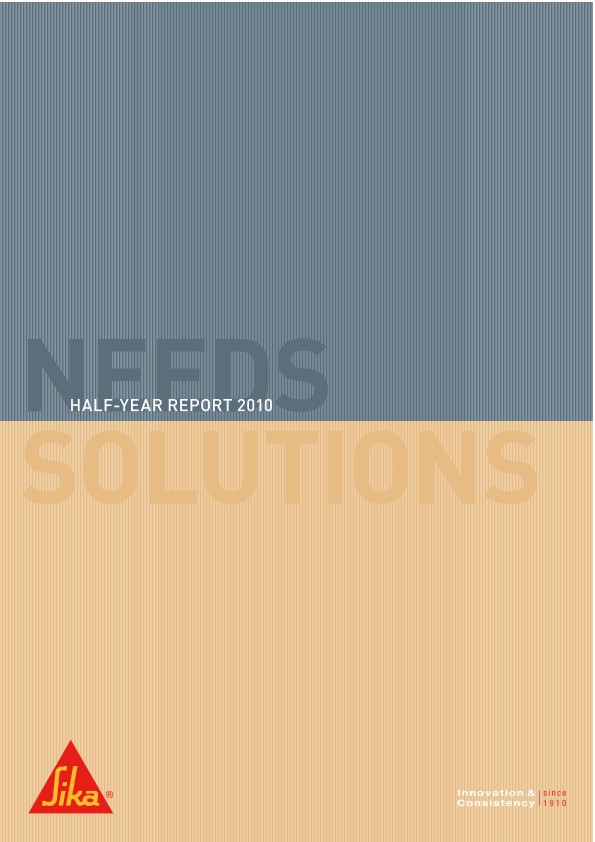 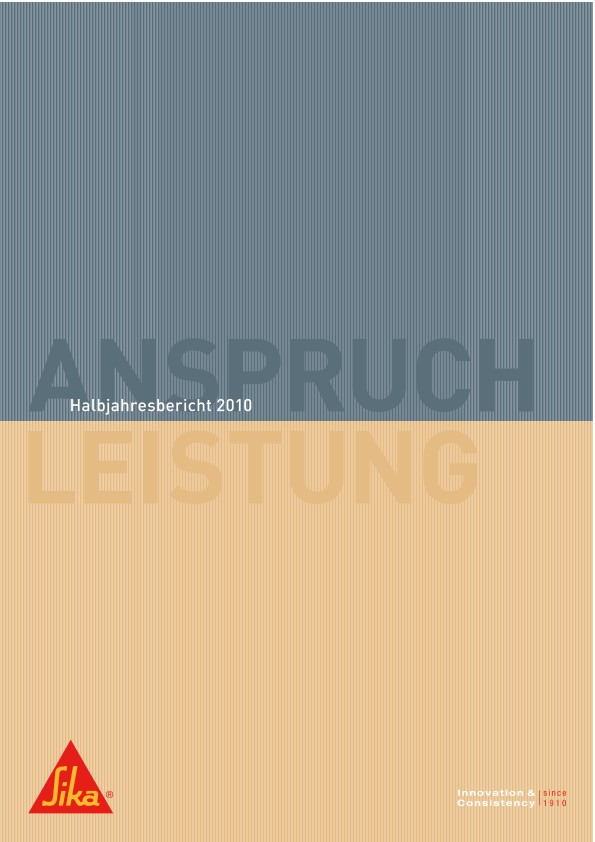