Sika increased sales in the first nine months of the year in local currencies by 8.7%. Consolidated net profit rose in this period by 24.7% to CHF 249.2 million. Business has been driven primarily by strong demand in emerging markets. In addition, sales of products for industry have also advanced measurably.

Sika’s markets showed varying development during the first nine months of the year. While European and North American markets were still volatile, development in Asia, Latin America and IMEA (India, Middle East and Africa) was strong. Total sales rose in comparison with the prior year period by 5.9% from CHF 3 132.6 million to CHF 3 318.6 million. Included in this growth are acquisitions in the amount of 3.4% as well as a negative currency translation effect of 2.8%.

In the first nine months of the year Sika grew in local currencies in all Regions. While growth in more mature markets such as Europe North (3.6%), Europe South (1.6%) and North America (5.6%) turned out to be lower, the emerging markets of IMEA (9.7%), Latin America (17.9%) and Asia/Pacific (37.0%) advanced clearly. Sales of products for the building and construction industry rose overall by 4.1%, while the increase among products for industrial manufacturing amounted to 14.3%.

Gross profit as a proportion of sales stood at 54.7%, declining slightly in comparison with the previous year, mainly due to increased raw material prices. In consequence of acquisitions, costs rose by 3.2%. Despite expansion necessary in the emerging markets, cost efficiency could be improved from 41.6% to 40.6%. The restructuring measures initiated in 2009 are proceeding according to plan.

Operating profit (EBIT) amounted to CHF 368.7 million, signifying an improvement of 23.3% in comparison with the previous year. This increase amounts to 14.6% upon absorption of the 2009 costs of restructuring. The EBIT margin reached 11.1% (prior year 9.5%). The consolidated net profit of CHF 249.2 million showed an increase of 24.7%.

Sika anticipates that the strong market development in the emerging markets in building and construction as well as in industry will continue. Mature markets in Europe and North America however remain difficult to predict, foremost in the building and construction industry. In particular it is not foreseeable how the austerity programs announced by various countries will affect construction activity. Sika is well positioned in these markets and will continue to exploit rigorously occurring opportunities to increase market share.

The company expects a continuation of the positive trend in the area of industry. Sika has secured a number of new projects with product innovations, which will effect sales development advantageously.

Due to continually rising raw material prices, gross profit will remain under pressure also during the fourth quarter. Nevertheless for the entire year of 2010 a decidedly higher net profit is anticipated in comparison with the previous year. 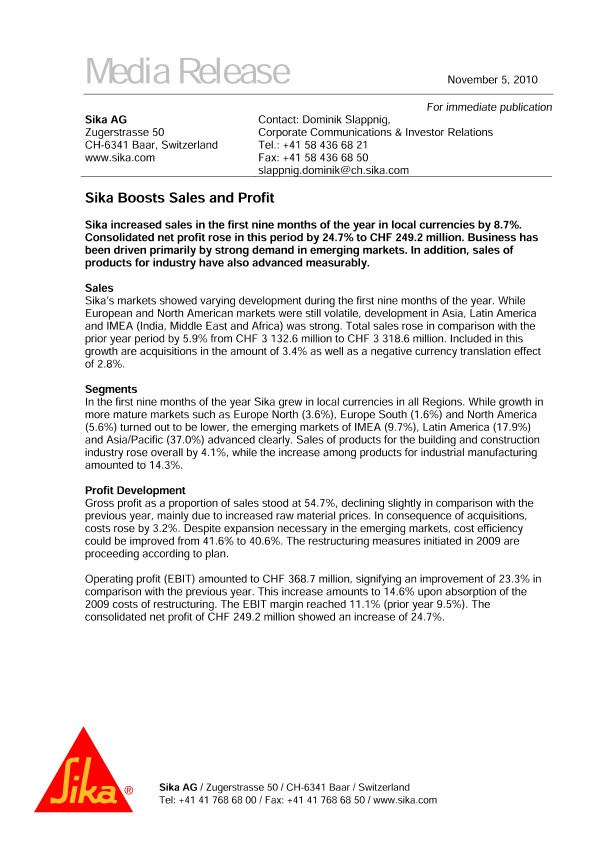 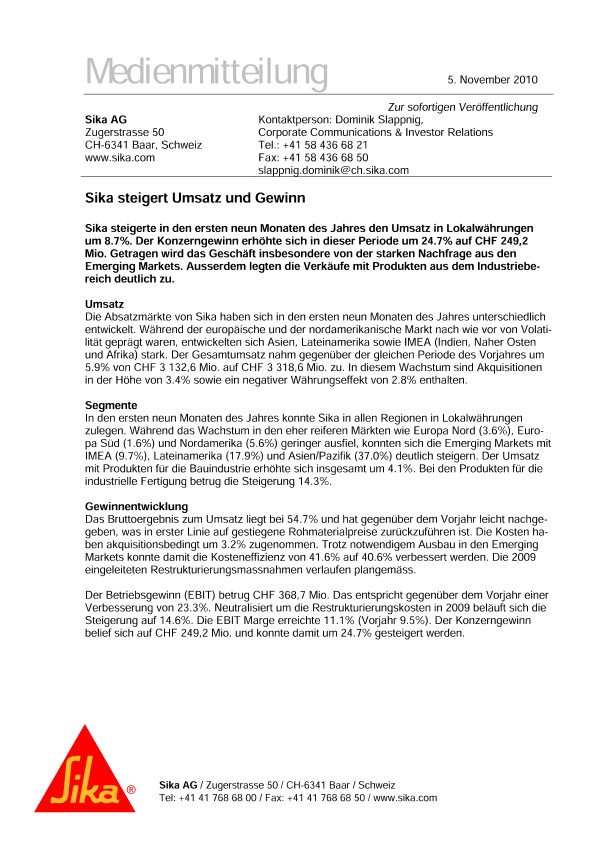