▪ Sales growth of 6.0% to CHF 3 630.1 million (5.4% in local currencies)
▪ 10.1% growth in emerging markets
▪ Significant increase in gross result to 52.6% (previous year: 50.8%)
▪ Above-average 32.3% rise in net profit to CHF 223.9 million
Thanks to its strong global position, Sika lifted net sales by 6.0% in the first nine months of the year despite the challenging environment in Europe. The growth in sales and the substantial widening of the gross result translated into an above-average increase in profitability.

On the back of a strong global presence, acquisition activities and the successful growth strategy in place in the emerging markets, Sika increased net sales by 6.0% to CHF 3 630.1 million (previous year: CHF 3 424.8 million), thus successfully countering the impact of the weak European and Chinese markets.

Looking at the year as a whole, Sika expects the emerging markets to continue driving growth. Construction activity appears to be gradually picking up in China, but the impending change of leadership makes any visible improvement unlikely before 2013. The outlook remains challenging for Europe, while the Region North America can look to deliver a positive performance in the 4th quarter as well.

Sika takes the view that raw material prices will follow a stable trend over the entire year. The company is thus confirming the positive margin development and predicts a substantial year-on-year increase for full year 2012. 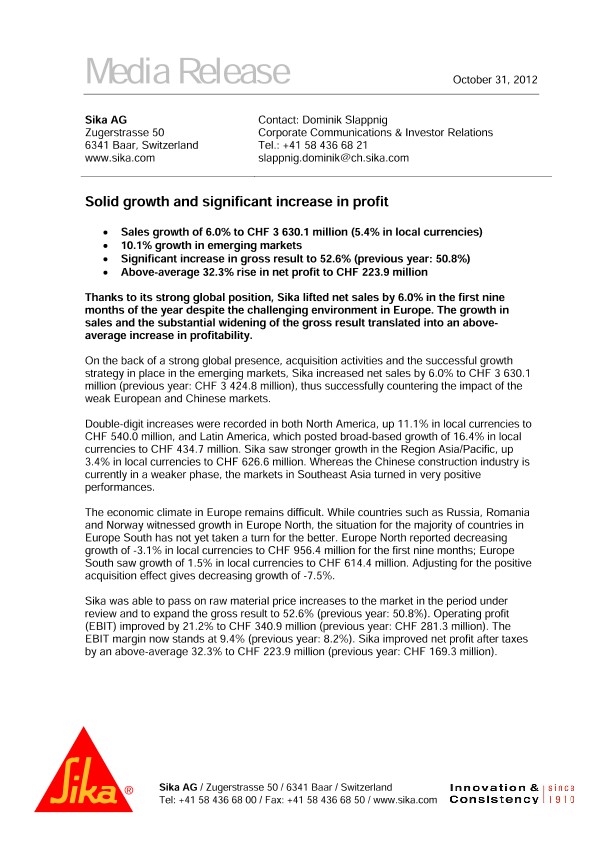