Continuous positive development in emerging markets and the revival of the industry business drove Sika to achievement of 2.3% sales growth in local currencies in the first quarter of 2010, although building activity in Europe and North America was clearly hampered due to weather. Gross margin could be maintained at the high level of the second half-year of 2009.

Sika increased sales in the first quarter of the current business year by 2.3% in local currencies. Included therein is an acquisition effect of 1.3%. Exchange rate fluctuations had a negative effect of -1.7%, so that sales in Swiss francs in comparison with the first quarter of the previous year grew by 0.6% from CHF 888 million to CHF 894 million.

Development in emerging markets was of critical significance for this sales growth. In Region IMEA (India, Middle East, Africa), Sika increased sales in local currencies by nearly 20%. Region Asia/Pacific followed with sales growth of 16.8%, with Sika companies in China (+44%), Vietnam (+31%), Thailand (+23%) and Indonesia (+20%) being particularly successful. In Latin America the company grew its sales in local currencies by 11.2% (Brazil +24%).

Building activity in Europe and North America was strongly hindered by a lingering and snowy winter. Conditions improved during the month of March and demand rose once again. Overall, sales in the first quarter in Region Europe North decreased by 3.5% and in Europe South by 2.2%. Sales in North America were 2.4% lower than those in the same quarter of the previous year.

The two product groups also varied in their development. While construction products sales were 1.5% below the level of the previous year due to weather, business with products for industrial manufacturing was able to gain 17.4%. Above all the large number of motor vehicle models that Sika had secured in 2008 and 2009 and which are now leaving manufacturers’ assembly lines contributed to this success. During the reporting period manufacturers also boosted their production figures.

Country-specific cost-reduction programs showed their effectiveness with the anticipated time lag, while restructuring measures for adhesives and roofing membranes in Europe are being implemented as planned. Profitability thus remained at a high level in comparison with previous years.

In the area of industrial manufacturing Sika anticipates a continuation of the market recovery observed during the first quarter, while in the construction industry one must reckon with market-specific weaknesses. The company also assumes that the Regions will show continued variance in development. Sika is well-position in this environment and anticipates sales growth for the year overall. 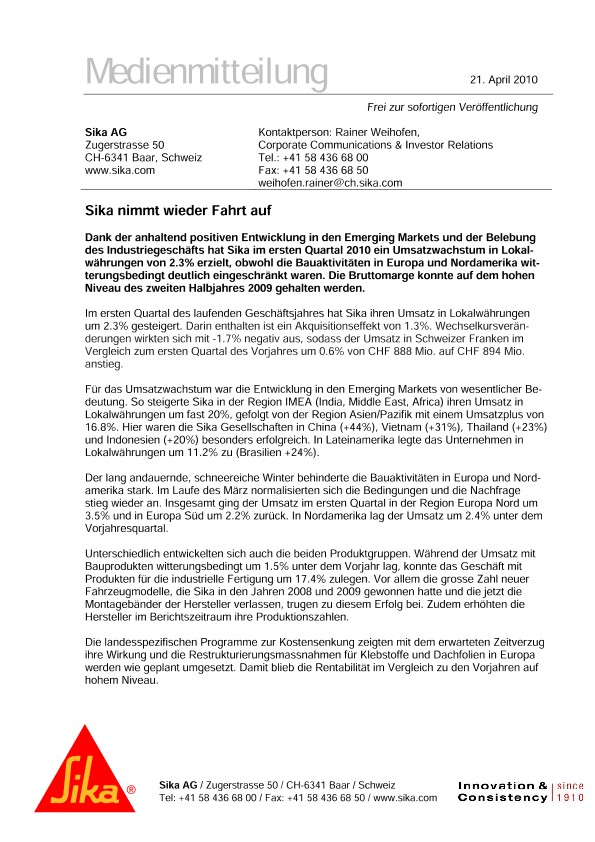