The new terminal of the Port of Leixões, located in the Matosinhos municipality close to the city of Porto, was built specifically for cruise ships. It sits upon a 340 meter long quay and includes a pedestrian access path for the general public and passengers. The main building hosts the passenger station building, a plaza, a gallery museum with laboratories linked to the Science and Technology Park of the Sea of the University of Porto, an aquarium, an underground garage, meeting rooms, a restaurant and a large covered amphitheater with a captivating view of the ocean.

The Project Manager that prescribed the project of the main building of New Cruise Terminal Port of Leixões wanted to install ceramic tiles of different thickness and shape on concrete walls, both internally and externally, and flat tiles for the ceiling.

Tiles needed to be fixed without sealant with a gap of 2-3mm. The whole design needed to be conceived for its location in an area exposed to chloride attack from seawater, temperature variations and thermal expansion. A solution permitting the installation of 900.000 ceramic tiles in six different shapes needed to be identified. The fixers faced considerable difficulties for the type of substrate and the uneasy access on vertical surfaces.

Therefore, installers only succeeded in carrying out 5 sqm per day per person. The combination of these aspects also implied a series of cost-control issues to stay on the above mentioned budget, as regards construction and maintenance over time.

Following the analysis of the substrate conditions (concrete curing, pull-off tests, compressive strength), a Method Statement was defined, including, first of all, the water blasting or the sandblasting of the substrate in order to eliminate all dust and any traces of form-release agents, the mechanical removal of all protuberances and imperfections due to formwork in order to have a perfectly smooth surface, suitable to grant the complete adhesion of the tiles to the substrate (which was supposed to be perfectly dry).

For external and internal wall tiling mainly hexagonal tiles of 15 cm diameter were used, with varying thickness and shape. They were laid with no grout, minimizing the use of the adhesive, which was also used as a leveling, also to maximize the three-dimensional and light-dark effects.

The adhesion of the adhesive ALL-9000 to the cast-in-place concrete and tiles was excellent, due to the fact that the glue has no vertical slippage (it’s a two-component polyurethane-based adhesive, class R2T according to EN 12004).

As regards the bonding procedure of the ceiling, Sika recommended the same installation procedure described previously, without following point 3. In this case, the still fresh adhesive was able to bear the weight of the tiles since they were installed on a flat surface, unlike those installed on the walls.

Rasolastik, two-component cement-based waterproofing product (Class CM02 of EN 14891:2012 standard for waterproofing beneath tiles), was used in the pedestrian access ramps leading from the building to the sea, therefore in the areas having the greatest exposure to chlorides. 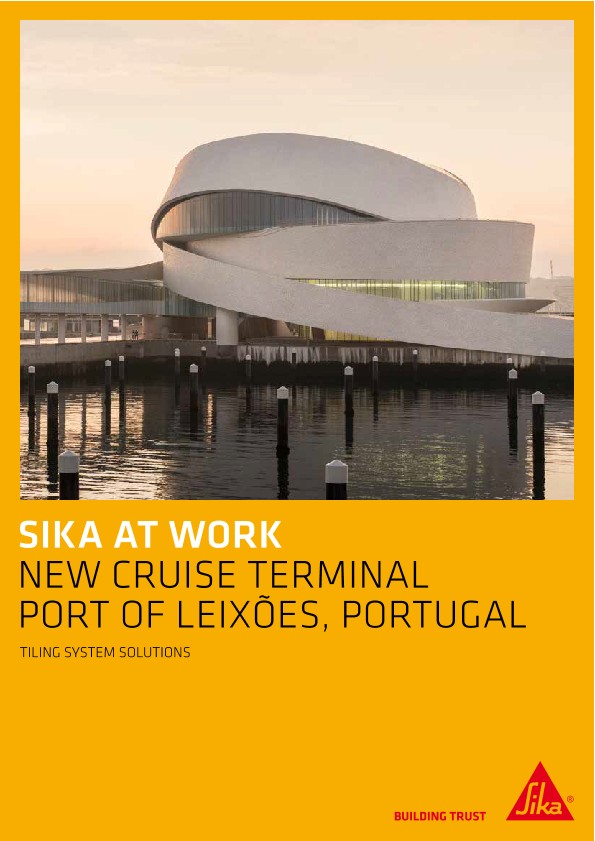